This issue takes place after FF#1. At this point, Spider-Man has already been invited to join the FF and take Johnny's place. In case you are wondering - yes, we are going to review FF#1. Our new reviewer, whose display name I'm not too sure of yet, is working on it.

The story
So, what happens in this issue? Well, it starts with Peter in bed with her new girlfriend - Carlie, whom I publicly dislike. They are discussing if they should have sex, and eventually agree to. Just then however, Peter sees the FF signal in the sky. At the same time, Carlie's phone rings. She says its urgent and that she has to leave. Peter takes the opportunity to join his team - the FF. (This kinda luck only happens in comics)

Peter rushes to his lab to find the new costume he made. He appears at the Baxter Building with his own Fantastic Four costume. None of the FF members are impressed though as they find it disrespectful to Johnny.

Honestly, I think the costume sucked anyway. Spider-Man complains that he didn't like the new costume as it made him look like Anti-Venom. ( Good point)


To cut it all short, the FF have some universe threatening adventures together in France, the Microverse, the future, and several other places requiring them to travel through alternate realities and etc. Peter decides to let Carlie know he'll be out of town for a few days and tells her over the phone that he'll be on a business trip.

Meanwhile, Carlie is at her crime scene, and notices some familiar purple chemical. (I'm not sure if this part is relevant yet)


Back at the Microverse, three things of importance take place.

The scene ends with Carlie appearing the next day at Horizon lab's asking them to ship a little something she baked for him, wherever he was. She then finds out that he was never sent on a business trip at all.

This story has some much better art, thankfully. Spider-Man is swinging around Manhattan when he sees everyone screaming and running around. Turns out Ghost Rider is in town. The rider is having trouble getting a drink due to his appearance. Spider-Man eventually joins him for a drink - Milk, at the bar.

Turns out that the rider is celebrating his freedom, no longer a puppet to a master. He's now trying to find a way to go back to plain old Johnny Blaze and get rid of the Rider. Just then, some demon guy gives some speech about how Ghost Rider's bike is not being used for its intended purpose. It is about to be taken away by some other huge burning guy. After a short fight, Ghost rider gets sucked into the Big guys chest. Before disappearing he asks Spider-Man to take the bike.

In case you reader's don't know, Johnny Blaze was made the Ghost Rider and given the bike to send bad souls to hell. Since he hasn't been performing his task, this happens.

Left alone with the Bike and the flaming demon bad guys, Spider-Man, jumps on the bike and rides away.

Thoughts
Firstly, I gotta say I enjoyed the second story more than the first. This team up looks great. The art, the story, and the cliff hanger is perfect.

As for the first story, the art, and story line itself was pretty classic, like the kind of story you'd expect from the 70's. The closing scene was interesting though. In my opinion, two things can happen here.
Carlie may or may not be able to handle the fact that Peter is Spider-Man. Even if she can handle it, Peter still has to explain lying to her.

Finally, my favorite scene in this whole issue is when Spider-Man compares his new costume to Anti-Venom. He has an absolutely perfect point that I'm sure the people up at Marvel realized when they designed the suit.

Also, how is Spider-Man able to fight alongside the FF without his Spider-sense? He lost it a few issues back.
Read More 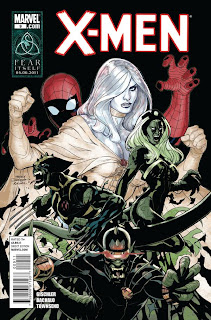 In the previous issues Spider-Man teams up with the X-Men to hunt for the Lizard. The story continues in Serve and Protect - part 3.

This issue starts with Wolverine slashing the human lizards. Emma, Storm, Gambit and Spider-Man join him. Wolverine informs them that Max was taken by a talking lizard. They come across some disgusting but meticulous dissections. Storm assumes that Connors is behind this but Spider-man disagrees saying someone else must be behind the experiments.

Meanwhile, the talking lizard brings Max to its master (DB001) and warns him about the intruders. It turns out that the real Lizard/ Dr. Connors is hooked up to a machine. We then see that DB001 is none other than (surprise!) Dark Beast. Lars, the second lizard was a limbless guy turned into human reptile mutate by Dark Beast using Connors research.

Max is locked up with the other teenagers by Lars. They demand to know why they are being held captive. Dark Beast explains the Lizard’s ability to unlock the reptilian part of human brain which turns them into lizards (read Shed). He then uses his machine to transform the kids, except Max, into reptiles. The villain wants Max to know that he is the most unfortunate and saddest losers of all the others. This knowledge will make him the most susceptible to the tranformation signal.

The heroes reach a white chamber where they are attacked by the newly turned lizards. Spidey and his X-friends defeat the teen-lizards. They are then assaulted by a huge reptilian Max. Gambit unleashes a kinetic explosion which makes him retreat. The X-Men and Spider-Man follow him to another room. Spider-Man warns them not to rush in but is locked out. Inside the room, the X-Men are greeted by Dark Beast and his machine’s signal. They all transform into X-lizards expect for Emma who is in her telepathy-blocking diamond form. 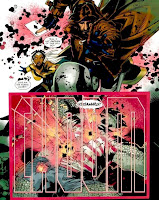 The story has picked up in this issue. We also see some action. The cover made it obvious that the X-Men would mutate into lizards. But why is Cyclops shown there? He does not appear in this issue at all. And someone has to come up with a better term for the lizard people. Spidey still has not done anything amazing. I suppose in issue #10 we'll see Emma and Spider-Man working together.