Summer is nearly upon us and we all know what that means... Big superhero blockbusters, both at the movies and in our comics! So how does Marvel's latest big event measure up? 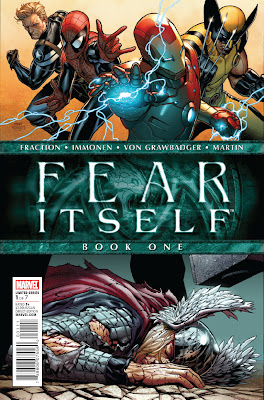 In Antarctica, the Red Skull and a group of her heavily armed followers attack an ancient Nazi fortress. The fortress is guarded by men who have been trapped inside since 1942 being kept alive by Nazi superscience. After killing all the guards, the Red Skull makes her way to a vault containing an ancient hammer not unlike Thor's. Upon touching the hammer, the Red Skull is transformed into the god Skadi.

At Avengers Tower, Steve Rogers is having trouble understanding what happened at the protest rally. Iron Man explains that people today are angry and scared given the state of the economy as well as other real world issues. Fortunately, Thor has allowed Iron Man to oversee the building of a new Asgard on Earth. Iron Man plans to hold a press conference announcing that Asgard will be built near Broxton Oklahoma. Hopefully, the project will create a lot of jobs and help alleviate the fears of the general public. Iron Man invites Steve and the Avengers to stand with him as he makes the announcement.

Iron Man announces the building project with the Avengers (including Spidey) at his side. During the press conference, Thor wonders why Odin is not among them. 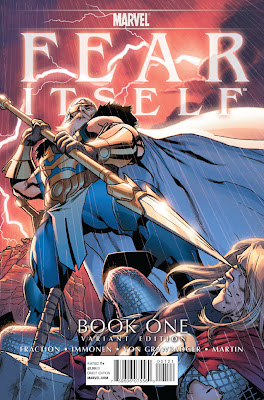 Odin is watching the conference unfold from what remains of Asgard, and he is not impressed. He notices that he is being watched by the Watcher. Odin is then confronted by Thor, who asks him why he wasn't at the press conference. Odin tells Thor that it would take only a snap of his fingers to rebuild Asgard, and that relying on human beings to rebuild Asgard demeans the gods. Thor protests, but Odin is in no mood to listen to reason. Odin slams Thor to the ground and tells him to choose between the gods and "man." When Thor chooses "man," Odin walks away in disgust.

Skadi travels towards the bottom of the Marianas Trench, fighting her way through the ancient monsters that dwell beneath. She eventually reaches a prison that contains who she was looking for; her father. Skadi frees her father from the prison where Odin had trapped him.

Odin becomes aware that this has happened, proclaiming that "the serpent is back." He walks in on a dinner between the Avengers and the gods and tells all the gods that they are going home. Thor objects, but Odin puts him in his place; giving Thor a severe beat down. Bound to follow Odin's will, all the Asgardians (carrying Thor with them) follow Odin to a new non-Earthbound Asgard.

Meanwhile, Skadi and her father discuss their future plans. Skadi's father wants to replace Odin as the All-Father, and to do this he will make both all of Asgard and Earth fear him. To help him with this task, he summons "the Worthy." As soon as he does this, seven objects shooting through space land on different areas of the planet...

As far as event openers go, part 1 of Fear Itself was pretty strong. As someone who doesn't normally follow Thor or Captain America's solo adventures, I can safely say that the plot was accessible and that by the end I found myself caring about Thor and his Asgardian brethren. Makes me want to check out Matt Fraction's other work with these characters...

I've been a fan of Stuart Immonen since his Ultimate Spider-Man days, so I'm happy to say that he delivers great work here, with a lot of gorgeous large scale visuals befitting an event book. 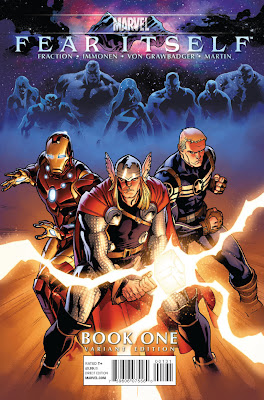 Sadly it doesn't look like Spider-Man will be playing a significant role in this series. He doesn't do much aside from appear in the background of a few scenes. Marvel fans should definitely check out Fear Itself, but if you're only in it for Spidey, you're probably safe in just sticking with his tie 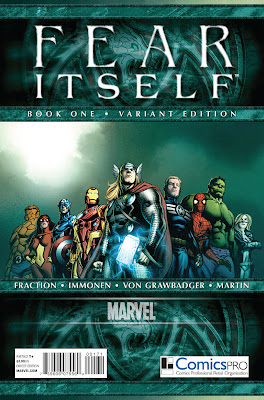 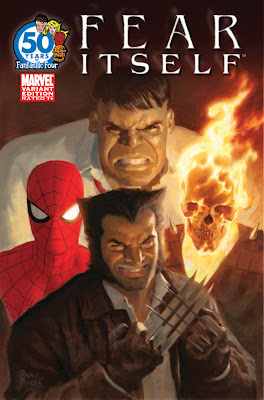