By the end of this issue, you should have a pretty good idea what has been taking place, how our two characters have been travelling through time, and why they are doing so.

The Story.
So at the end of the last issue, we found out that everything that has been happening to Spider-Man and Wolverine has all been a reality TV show set up by Mojo. Mojo has been paying Czar and his short friend some good money to keep the show interesting by throwing our two heroes through time, messing with their minds.

We also find out that the girl who Peter kept dreaming about, and made several statues of, in the first issue was also part of the plan. Mojo had this girl ( who was present at the bank the day it all started), keep appearing in Spider-Man's dream to cast her as a potential love interest later in the show.

Anyhow, while Mojo is behind the screen ordering his guys around, Czar appears stating that Spider-Man somehow stole some diamonds, causing them to loose control of what time stream they are travelling in. It also means that they could at any moment appear where they are ( which is exactly what happens)

Mojo however finds this all interesting and and proposes to introduce Spider-Man to his 'love interest." The girl immediately gets Spidey's attention. Somewhere in between, while Spidey is distracted ad Wolverine is getting ready to slice Czar, time stops again. Just as Czar begins searching for the lost diamonds however, Wolverine bursts into flames, somehow unfreezing time.

In a slapstick comedy style scene, Wolverine makes a comment about how Czar should be able to warn himself about whats going to happen to him once wolverine is done with him. Just then, and old version of Czar appears, doing just that. The young Czar can't believe how old and shriveled he has become. While the two Czars argue, Wolverine decides to cut the young Czar's hand that's holding the diamond bat off - explaining why the old version of himself had a false hand.

Once again a little too late, another version of himself appears from another timeline, trying to warn his past self about the hand.

Anyway, Wolverine and Spidey travel somewhere in the beginning of time, where a planet that grew these special diamonds on trees once existed. The all knowing glowing eyed Wolverine suddenly becomes an encyclopedia telling Spider-Man about the history of the diamonds and etc. They eventually gear themselves up with the diamonds and go back to Mojo's timeline.

The heroes then kick the bad guys asses, but not before Spider-Man realizes that Wolverine has suddenly become a Dark phoenix Wolverine. Mojo in the meantime is sitting somewhere, enjoying every minute of what is happening.

I really enjoyed this issue except for a few strange parts. The very fact that this Mojo character appears in the comic means that the story is about to become a comedy.

Nothing wrong with all this, just really comical :)

The return of Mark Bagley! Oh, and something about the death of Spider-Man... 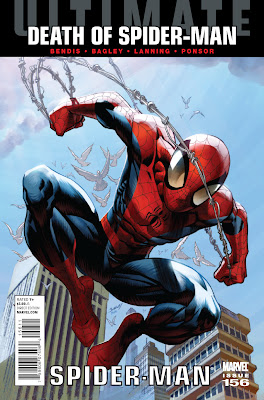 At the Triskelion, S.H.I.E.L.D. Director Carol Danvers interrogates a newly resurrected Norman Osborn. How Norman survived getting his brains blown out is something neither of them seems to know.

While having lunch with Mary Jane, Peter Parker gets a call from Captain America. Cap tells Peter to suit up and meet him at the First Calvary Forest Hills Cemetery for superhero training.

Back at the Triskelion, Norman transforms into his Goblin form and breaks out of his cell. He then breaks out his fellow inmates; Electro, Kraven, Sandman, Doctor Octopus and the Vulture. Together, they hijack a helicopter and escape.

At the cemetery, Cap gives Spider-Man a lecture on life and death, telling him that he doesn't fight smart, as though his life was on the line. Before the lesson can go any farther, Cap gets a call from Carol Danvers. She informs Cap that Nick Fury's black ops team has gone rogue and that he is needed (this all happening in the still Spider-Manless Ultimate Avengers vs. New Ultimates miniseries). Cap leaves, telling Spider-Man that he can't come with him. Eager to prove himself, Spidey follows him anyway.

Upon reaching New York, the Six ditch the helicopter and take refuge in a penthouse. They hear on the news about a giant superhero battle that is currently occupying S.H.I.E.L.D.'s attention. Norman sees this as the perfect opportunity to kill Spider-Man.

Meanwhile, Spider-Man is witnessing the carnage of the superhero battle from a nearby building. He then gets a call from MJ, who warns him that Norman Osborn and his other enemies have escaped.

No offense to the artists who have been on the book since, but I've really missed Bagley on this title. He was born to draw Ultimate Spider-Man, and having him back on the book is a real treat.

Norman Osborn's return was a surprise, as his death in the Death of a Goblin storyline seemed pretty definitive. I'm glad my favourite Spider-Man villain's Ultimate counterpart is back, but I hope an explanation is eventually provided. The suddenness of his return suggests that Brian Michael Bendis needed a villain with a personal tie to Peter for this story, realized Norman fit the bill perfectly, and haphazardly brought him back. And if Norman could survive a gun shot to the head, then it is also possible that Harry Osborn (the Ultimate Hobgoblin), last seen beaten to death by his own father, is also alive.

I liked the relationship between Spidey and Cap in this issue. Cap's frustration with Spider-Man's immaturity was a refreshing change from the mutual respect they have for one another in the Marvel Universe. I've always preferred Spider-Man having a more uneasy relationship with his fellow heroes.

A gripping story where our hero is in genuine peril combined with the return of the great Mark Bagley means that the Death of Spider-Man is off to a strong start. It's also pretty new reader friendly, so if you've been curious about Ultimate Spider-Man in the past, this is a good place to start. 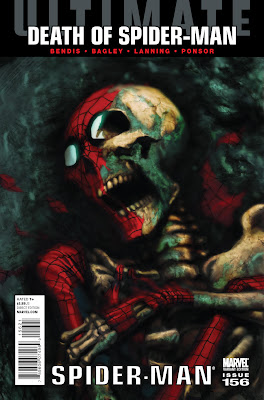 If you're not buying this series, you should immediately act to rectify that mistake... 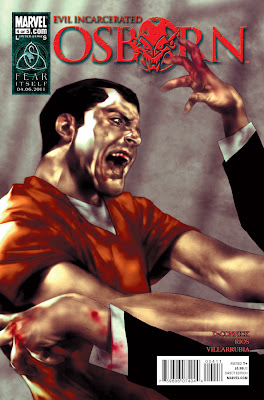 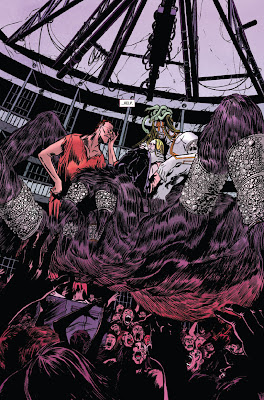 We last left our friend Norman Osborn in an underwater prison with hundreds of escaped convicts ready to die for him and Norah Winters in his clutches. After questioning Norah on how she got there, Norman decides to let her write her story. Norman gives a rousing speech to the prison population and then retires to an above control room with Norah, June Covington and the Priest.

After the four compare notes, Norman is able to figure out that Senator Muffoletto is being set up by her political rivals to take the fall for the underwater prison, using Norman's "transfer" there as the catalyst. After having June escort Norah out of the room, Norman calls Muffoletto. He informs her that she is being set up and offers her a deal; in exchange for Norman getting sent back to the Raft and receiving a trial, he will guarantee that the existence of the underwater prison will never become publicly known. After some hesitation, Muffoletto reveals the location of an escape sub located in the prison. After hanging up the phone, she asks for the Pentagon.

After sending the Priest on a mission, Norman gathers Norah, June, Pryor Cashman and Al Apaec and heads for the escape sub. Once there, they run into the mysterious figure who brought Norah to the prison, who is revealed to be Carney Rives. Rives uses his phasing powers to open the submarine allowing them all to escape.

Meanwhile, the Priest succeeds in his last mission, blowing up the underwater prison.

We are nearing the end of Osborn and I am still awe struck by how awesome this series is. Kelly Sue DeConnick has a perfect handle on Norman's voice, striking the perfect balance between the power hungry would-be tyrant and the eccentric sociopath. Emma Rios also brings her 'A' game to the table; the facial expressions and body language of all her characters, particularly Norman, are perfect.

I'm not sure what DeConnick will be doing after Osborn wraps up, but whatever it is, count me in. She's made a fan here.
Read More
Newer Posts Older Posts Home