Issues 2 to 4 of Ultimate Doom reviewed here! Just in case you missed part 1, here it is. 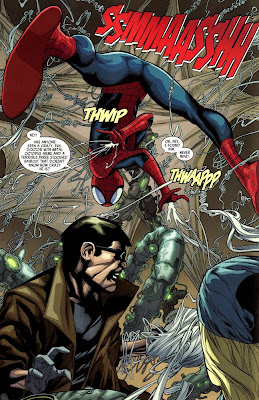 Flashback: Reed Richards and Sue Storm are having a picnic on a rooftop. Reed tells Sue he doesn't like the world he lives in, and that he wants to find one that is perfect, or one he can make perfect. A world where "science is not for sale" and "brilliance is standard." Sue can't tell whether Reed is being romantic or creepy (pssst Sue, the second one). 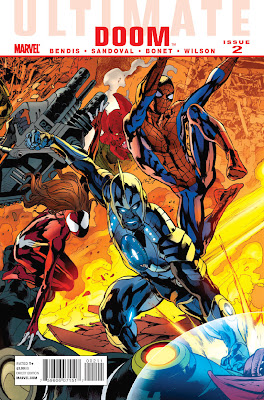 Back in the present, the doctors manage to resuscitate Sue, who wakes up screaming. After Ben Grimm calms her down, Sue warns that they need to evacuate the building.

At Roxxon Industries, Doctor Octopus and the Roxxon brain trust have Jessica Drew (AKA Spider-Woman, female clone of Peter Parker) strapped to an operating table. Ock is about to cut Jessica open when Spider-Man arrives on the scene. Spidey quickly webs up the braintrust and frees Jessica before being attacked by Samuel Sterns in his "Hulk" form. Spider-Man manages to beat Sterns while Jessica beats Ock to a pulp. The two barely manage to escape before the Roxxon building is attacked by one of Reed's creations.

Back at the Triskelion, Sue uses S.H.I.E.L.D.'s computers to bring up Reed's files on all the dimensions he's discovered. As Sue is about to send the info to Tony Stark, the Triskelion explodes... 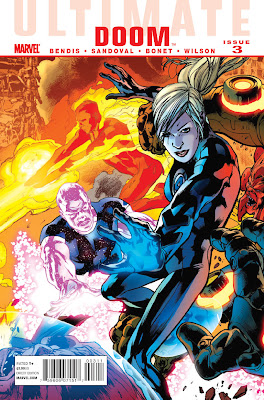 Sue manages to save Johnny, Ben, Carol Danvers, Nick Fury, Captain Marvel and Rick Jones (A.K.A. Nova) from the blast with her forcefields. Rick Jones teleports them all to Project Pegasus, where they find S.H.I.E.L.D. agent Wendell Vaughn. Sue believes that she can find Reed with the right equipment. Vaughn leads her to a secret lab underneath the base.
Meanwhile, Spider-Man and Woman attempt to save everyone they can from the destruction of the Roxxon building. Much to Jessica's chagrin, they also manage to save Doc Ock.

Back at the lab, Sue finds out that Reed is hiding in a pocket dimension, but in order to track his exact location she needs a sample of the organism Reed keeps using to attack them. She tells Rick Jones to go to the Roxxon building to collect a sample and bring back any scientists he can find. Johnny goes with him.

Once they arrive, they find Spider-Man, Spider-Woman and Doc Ock. After collecting a sample of the organism, Rick Jones teleports them all back to Project Pegasus. 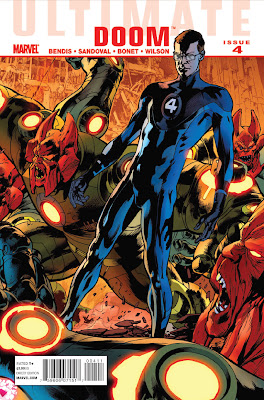 Ben Grimm confronts Reed Richards at his negative zone hideout. Ben tries to reason with his former friend but has no luck. The cavalry then reveals itself; consisting of the rest of the Fantastic Four, the Ultimates, Spider-Man, Spider-Woman, Captain Marvel, Nova, Doc Ock, and a bunch of S.H.I.E.L.D. agents led by Nick Fury and Carol Danvers. A huge fight breaks out between them and Reed's forces. During the fight, Spider-Man, Doc Ock and Nova, acting on a plan created by Spidey, manage to get to Reed's main computer. Neither Spidey or Ock can make heads or tails of how it works, so they have Nova teleport it back to Earth along with them. Spidey then realizes that the reason Reed targeted him was because Reed considers him a genius.

Without his computers, Reed's hideout begins to fall apart. The remaining heroes escape aboard the Helecarrier while Reed falls into the void. Once back on Earth, Carol Danvers makes Jessica an agent of S.H.I.E.L.D. Together the two of them take Doc Ock into custody.

Sue and Ben stand on a rooftop looking over the remains of the Baxter Building. Sue asks Ben to marry her, and the two happily embrace.

Meanwhile, Reed continues to drift through the negative zone.

For a series that seemed to fly under the radar, Brian Michael Bendis' Ultimate Trilogy was one of the more enjoyable event books I've read in a while. Bendis' dialogue and characterization were top notch, and Rafa Sandoval consistently delivered gorgeous artwork throughout. Spider-Man fans will find a lot to like about this series. Whether it's his great banter, him kicking ass, or using his brain, this series delivered Spidey at his best.

At its core though, this was a Fantastic Four story. Reed Richards fans might be put off by his Ultimate Universe counterpart (I wouldn't blame them) but this seems to be the new mandate of the Ultimate Universe; taking classic characters in drastic new directions that would be unthinkable in the regular Marvel Universe. This series succeeded admirably in that regard, creating an interesting new dynamic between the Fantastic Four that we would not be able to see anywhere else.

The relationship between Reed and Ben was particularly interesting. Despite everything, it was still Reed who finally managed to cure Ben, and Ben never wavered in his desire to help his former friend. It's a relationship I would like to see explored more in the future.

Along with its two predecessors, Ultimate Doom was one hell of a ride. If you missed these books when they first came out, the inevitable collected edition will be well worth the purchase.
Read More
Newer Posts Older Posts Home