The Zodiac Key storyline concludes as the Death of Spider-Man looms... 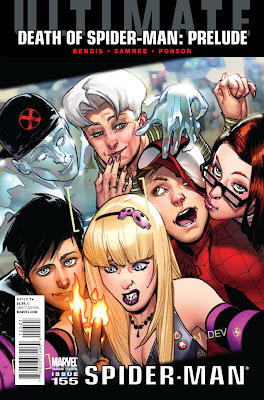 Mary Jane runs into Gwen Stacy outside of the Parker house. Gwen explains to MJ that she and Peter are friends again, but are no longer dating. Their conversation is interrupted by 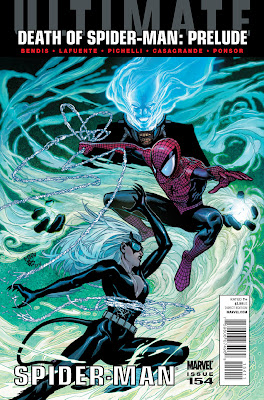 a huge flash of light in the sky. They both hope that is has nothing to do with Peter.

Unfortunately it does. Spider-Man, Iron Man and Black Cat have just confronted Mysterio, who has recently gotten his hands on a powerful artifact called the Zodiac Key. With the key in his possession, Mysterio easily takes Iron Man out of the fight, leaving just Spidey and Black Cat. With some quick use of his webbing, Spidey manages to get the key out of Mysterio's hands and a fight ensues. During the fight Spider-Man is able to get his hands on the key. Spider-Man inadvertently activates the key, creating a vortex in the sky that starts sucking everything into it. Shocked by what is happening he drops the key, and the vortex stops. The fight for the key continues until Tony Stark ambushes Mysterio and deactivates him. It turns out that the Mysterio they were fighting was actually a robot being controlled by Mysterio from a remote location. Tony commends Spider-Man for his actions and takes the key for safe keeping. Spidey and Black Cat remain behind and help the people who survived the destruction caused by the key.

Traumatized by the night's events, and desperate to talk to someone, Peter heads over to MJ's house. 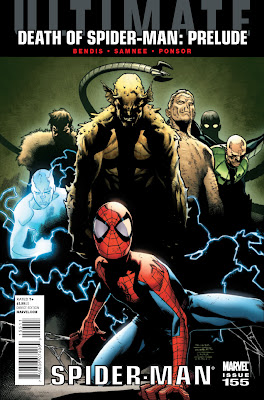 Peter gets fired from his fast food job, a consequence of his double life. He then gets a call from J. Jonah Jameson, who asks Peter to meet him at his office. Once there, JJ tells Peter that he would do anything to protect his secret and asks if there is anything he can do to help him. Peter asks for his job at the Bugle back, and JJ gives it to him. Peter will also be allowed to leave the job if trouble occurs, and in exchange Peter will give JJ the scoop on the story. In addition, JJ promises to put money towards Peter's college despite Peter's objections.

Later, Kitty Pryde (in her Shroud costume) stops two thieves on Rollerblades, and runs into Spider-Man in the process. Spidey pleads with Kitty to let him talk to her, and she agrees. Out of costume, Peter and Kitty reconcile their friendship. Kitty also reveals that she and Kong are no longer dating. As they enter Peter's house they are greeted by Peter's friends and family with a"surprise!" It turns out that it's Peter's birthday! During the celebration MJ gives Peter a gift from Tony Stark; upgraded webshooters. Peter tells MJ he loves her, and the two of them share a kiss.

The Zodiac Key story was odd; the key appeared out of nowhere, and nothing significant really came out of it. By the end of the story it looked like it would join the other forgotten powerful artifacts of the Ultimate Universe. I won't be disappointed if it's never revisited. It was difficult to tell why exactly Peter was so traumatized by the end of the story. His possession of the key caused a little destruction, but it didn't kill anyone the way Black Cat's possession of the key may have. Although in my summary of the story I wrote that the key created a "vortex" while in Peter's hands, the artwork was unclear as to what exactly was happening. It felt like I was missing something.

Things were certainly looking up for Peter by the end of #155. He has a great job that accommodates his life as Spider-Man, money for college, his friend Kitty is back, and his relationship with MJ has been reconciled. I'll bet nothing can take him down now! Nope, absolutely nothing...
Read More
Newer Posts Older Posts Home