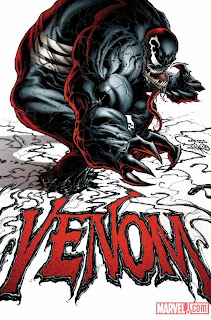 In life, there is a tendency to put certain labels on people. What we think of a person is, a lot of the time, decided within the first few minutes of meeting them. He’s a nerd, she’s easy, she’s smart, and he’s dumb. But human beings are much more complex than that, they are never only one thing; that is a lesson most people learn in life. In media however, it sometimes seems that people forget this and create characters as a means to an end. A big, dumb jock is needed, a character is created to fit that mould and remains in that mould forever more. This is particularly true of side characters, Eugene “Flash” Thompson has stood the test of time because he is the opposite of this. Flash is a war hero and an alcoholic. He went from being tormentor in chief for “Puny” Parker to being Peter’s best man. He has as many complexities and contradictions as any lead character. Now, after five decades as a side man, he finally gets his greatest wish; he’s Spider-Man.

Actually, he’s in the suit of one of Spidey’s greatest enemies, the symbiotic alien Venom.

After the suit is forcibly removed from it’s previous host Mac Gargan, the US Government decide to use it to create a new Black Ops super solider. The first choice lost control of the suit and had to be killed; Flash is drafted in as his replacement. The same fate awaits him if ever he loses control. Flash is unconcerned. This is his chance to be a hero; just like Spider-Man.

In Flash’s mind there are obvious parallels between himself and the web slinger, what he doesn’t know are the parallels between him and Peter Parker. It has long been a corner stone of the stories that Peter Parker must suffer so that Spider-Man can do his job. Flash too must suffer. He has recently re-entered a relationship with Betty Brant, who is already suspicious that he has taken to the bottle again. But the more striking parallel is how Rick Remender reminds us that as much as Peter is defined by Uncle Ben, Flash is defined by his father. Flash’s father was also an alcoholic who would beat him as a child. He was a cop, a good one, but with a demon inside him. Just like Flash carries Venom inside him. 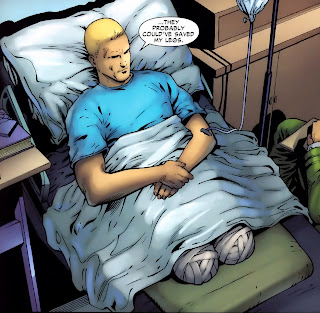 The fact that Flash is an addict is given special attention to in this issue. He’s tempted to drink to escape his troubles. Flash has a limited amount of time in the suit, 48 hours at one time and a limited amount of missions. One has to ask how a man addicted to alcohol will react when the power of the Venom suit is taken away and he is left a cripple.

A promising start from Remender and Tony Moore, who have taken a great side character and made a star.