Finally, we have ourselves an image of Spider-man from the new movie that actually looks pretty decent. Prior to this we've had some sneak images of the new costume that hasn't really aroused too much interest. This new image however might change some opinions.

Apparently the title for the new Spider-Man movie will be  " The Amazing Spider-Man," even though the suit, and not to mention Andrew Garfield himself, looks more like the Ultimate Spider-Man version.

The film, directed by Marc Webb, starring Andrew Garfield and Emma Stone ( As Gwen Stacy ) will be released in July 2012, and will be available in 3D.

The Infinite Spider-Man Part 1.2: Dissatisfaction in 2006 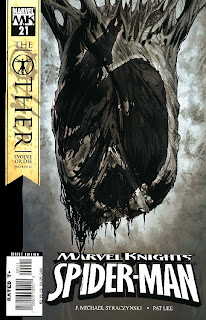 A year or so before “One More Day” was supposed to ship, I became convinced that something major should be done with the Spider‑Man comics, because I was looking forward to the Batman and Superman books more. I have long believed that Spider‑Man is the greatest comic book character ever and should have the best creative teams and the status quo which contributes to those writers and artists producing the best possible material. As a result, I was disappointed when the Batman and Superman books seemed to have better creative teams and buzz, with Johns/ Donner/ Kubert on Action Comics, Morrison/ Kubert on Batman, Dini/ Williams on Detective Comics, Busiek/Pacheco on Superman, and impressive creative teams elsewhere.

The pre “One More Day” books were decent and distinct, but they could have been better. The creators all had their fans, and delivered okay work, with a few clunkers in each title, but this wasn’t enough when dealing with the best character in comics. I wanted Spider‑Man stories that rank amongst the character's best, until the next arc turned out to be even better, and that wasn’t happening.

Sales were also unimpressive. If Friendly Neighborhood Spider‑Man and Sensational Spider‑Man couldn't even break the Top 40 or Top 60 in the case of the last issue of FN’) something was very wrong. Ultimate Spider‑Man was sometimes viewed as a reason that the writers and artists of the Marvel Universe Spider‑Man books shouldn’t even try to be appealing and accessible to new readers.

Around the end of April 2006, there were the first rumblings of a JMS/ Joe Quesada mini-series which was meant to”fix” Spider-Man. I considered the creative teams that could renew interest in the titles, and this got me thinking about the best directions for the individual books.

I realized that it would make sense for Marvel to cancel Friendly Neighborhood Spider‑Man and Sensational Spider‑Man, and just relaunch Amazing Spider‑Man with some new satellite titles (or just turn the main book into a weekly title.) If that was going to happen, the books might as well get a complete creative overhaul and if that was going to happen, there might as well be a drastic change to the status quo to justify all this, and that status quo should be the one that encourages the most great stories in the future.

And there was one element of the title which certain writers had been particularly vocal about. Although none of those writers mattered as much as Marvel's then-Editor-in-Chief.