School's not quite in session yet... 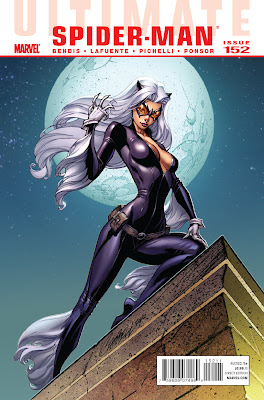 
Two weeks ago: the Black Cat witnesses Spider-Man's fight with Mysterio which results in the destruction of one of Mysterio's hideouts (UCSM #6).


Back in the present, Iron Man arrives on the Parker's front lawn asking where Peter is. Aunt May scolds Iron Man for potentially compromising Peter's secret. Iron Man quickly leaves, pretending to ask Aunt May for directions.
One week ago: the Black Cat searchs the ruins of Mysterio's old lair. She quickly finds what she is looking for; an ancient artifact called the Zodiac Key. She is suddenly confronted by Mysterio, who explains that the Kingpin used the key to control his men. Mysterio demands that Black Cat give him the key, but she refuses. With the help of the key, the Cat manages to escape.


Peter, Bobby and Johnny arrive home and are all surprised to see that Gwen has returned. Peter and Gwen have a private conversation where they decide to end their romantic relationship and remain friends. Peter then gets a call from Tony Stark, who asks Peter to meet him at Stark International for superhero training.

Thoughts
This issue was a little disappointing; as we have to wait yet another issue for Peter's superhero training. Ditto on the Zodiac Key. I wouldn't think the Kingpin would need a magical artifact to control his men. He could control his men because he was the Kingpin, period.


I did like the scene between Iron Man and Aunt May. Brian Michael Bendis always does a great job of bringing out the humanity in these larger than life characters.
Read More
Newer Posts Older Posts Home