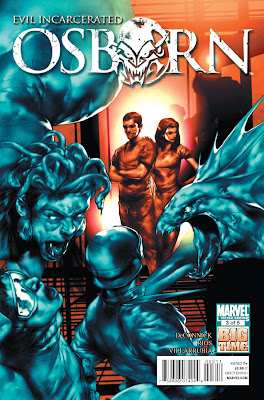 
Norman and his posse enter the other side of the Special Containment Centre, where hundreds of criminals are rioting. Meanwhile, Norah Winters watches the whole thing unfold from the control room above.
Desperate to find Norah, Sarah Saulsby calls Senator Sondra Muffoletto's office. While on the phone, Sarah discovers the goblin tattoo with pier 84 written on the back on Norah's desk. Sarah tells Muffoletto's secretary to ask Muffoletto if pier 84 means anything to her.


Back at the Special Containment Centre, Norman and his team continue to battle the other convicts. However, when the convicts notice that Norman is amongst them, they stop fighting and begin chanting his name. Judging by all the goblin tattoos, it looks like all the convicts are members of Norman's cult.


Senator Muffoletto receives a call from her secretary, asking her about pier 84. She denies knowing anything and then phones Senator Bill Morrison to set up a meeting. However, Morrison rebuffs her, leaving a frustrated Muffoletto to throw her coffee pot against the wall.
While Norman is being hoisted into the air by the convicts, the Priest points out that Norah is watching them. Norman orders Al Apaec to bring her down, and Norman informs Norah that he is planning to build an army...
Thoughts
With the third chapter of Osborn, Kelly Sue DeConnick delivers an action heavy issue. It's always fun to see Norman cut loose, and Emma Rios brings Norman's sadistic side to life beautifully. However, Rios' fight scenes can be hard to follow at times, as the lack of detail in some panels make Norman and the other convicts look the same.
I am curious to see where DeConnick is going with this. Will Norman break out? If not, who will stop him? So far this book has exceeded my expectations and I am eager to see how it concludes.
Read More 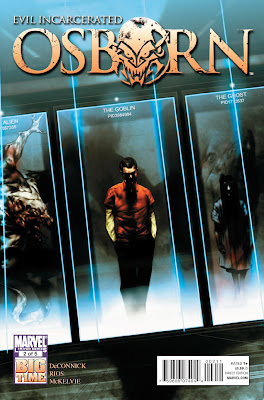 The Story
At the Special Containment Centre, Norman Osborn sits down to have a "session" with the Priest and quickly takes control of the conversation.
At Front Line, Norah Winters receives an envelope containing a goblin tattoo, a time and an address.


Back at the Special Containment Centre, the Priest asks the guard to leave the room. Once this happens, he explains Norman's situation in more detail. The Priest is part of a cult that sees Norman as their messiah, and that has hundreds of members. He then explains that Norman will likely be kept in the Special Containment Centre for the rest of his life without a trial. All of a sudden, an alarm goes off throughout the facility. Apparently this is part of the cult's plan to bust Norman out.


The alarm is also going off in the area where the five prisoners are located. In the ensuing chaos, Xirdal through the bars of his cell and grab the guard stationed there. He threatens to kill the guard unless the guard gives clearance to open his cell. Unfortunately for the guard, he does not have the authority to do that. Needless to say, it does not end well for him.


Back at Front Line, Ben Urich receives a tip regarding Norman involving Senator Muffoletto's committee and is frustrated that he cannot find Norah. He orders Sarah Saulsby (mail girl, aspiring reporter) to find her at all costs.
Norman decides to take a more proactive role in his escape and begins killing the guards and taking their weapons. Norman and the Priest then proceed to break out the other five prisoners. Once they are all assembled, Norman quickly establishes himself as the one in charge. He then confirms his suspicion that the Special Containment Centre is actually under water.
Norah is waiting at pier 84, the location that was in the envelope. Her mysterious informant arrives, and takes Norah to the Special Containment Centre via submarine.
Thoughts


Two issues in and I am loving this series so far. Kelly Sue DeConnick's portrayal of Norman is spot on, and the other five inmates are becoming great characters in their own right. DeConnick delivers the best supervillain interaction I've read since Warren Ellis' Thunderbolts. The scene where the prisoners attempted to escape via the guard was particularly tense and scary.


Emma Rios' artwork is equally impressive. Rios' rendition of the scene where the guard is getting overwhelmed by the sound of the alarms and the taunting of the prisoners is trippy and fun to look at.


Osborn is proving to be one of the best Spidey books on the stands right now. If this level of quality maintained for the remainder of the series, we will be in for one hell of a ride.
Read More
Newer Posts Older Posts Home