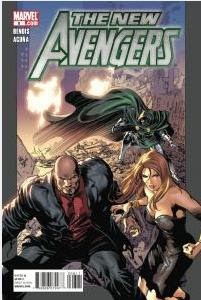 Ever since Volume 2 of The New Avengers launched this past summer it has quietly surpassed Ultimate Spider-Man as the best Bendis book. The book has all you want from an Avengers title, the big action, entire sections of New York being destroyed in seconds and the cost of failure being extremely high. But what separates it from it's sister title, The Avengers, is the relationship between Luke Cage and Jessica Jones, it is this relationship that takes up the majority of this issue.

The Story
Jessica Jones was a superhero, in her mind she was not very good at the job. In the lasts few months her feet have been getting itchier by the second but her role as a new mother has been stopping her from donning the spandex again. Luke decides that it's time for them to have a real talk about it and takes her out to dinner, their first date despite being married.
Marvel Comics and their heroes have always been based in the real world, while they have extraordinary abilities their reaction to those abilities have always been ordinary; Peter Parker tries to make money of his, Johnny Storm uses his to get girls, Ben Grimm is always, at least in part, tormented by his appearance and the dangers they face and the ramifications of those dangers have always been portrayed as a very real thing. Luke Cage has unbreakable skin, she does not, the potential for her to die and her baby to grow up without her mother is treated with the respect that the idea deserves. But it is also her baby that makes her want to be a hero again, how can one teach their children to always do what's right when you stand on the sidelines and watch people suffer who you could help?

Their conversation is interrupted by an egg like ship crashing down on the streets of Manhattan, carrying Ms Marvel with it. Out of the egg comes Dr. Doom or, as revealed later, a Doombot. After a brief fight the bot is defeated, revealing information that Doom's position as Monarch in his country may be under threat, a plot that will feature heavily in a future arc no doubt.

Thoughts
A special mention must be given to Daniel Acuña's art. There are many artists who can draw a fantastic battle scene like the one between Luke, Jessica, Ms Marvel and the Doombot, not many can take two people sitting at a table talking look interesting. Bendis dialogue is, as ever, great, but that only gets you so far in a visual medium, the artist has to do the rest.