Ok, so here is the extremely late Part two of Amazing Spider-Man 650.


The Story takes place in The Raft, Maximum security prison. We see Dr Folsome waiting for an escort who eventually comes - Mr Jenkins/ Mach -5. Dr. Folsome talks about his past to Mach-5 and how he loved science.

They eventually meet the Dr's patient - MacGargan/ Scorpion who was previously Venom, until the Symbiote left him. They talk about Mac Gargan's ill condition since the symbiote had left him. As they continue discussing, Dr Folsome says that he'll have to take MacGargan back to his own lab. When Mach-5 disallows it, Dr Folsome reveals that he is not actually Dr Folsome. He is in fact Alistair Smithe aka the Spider-Slayer, who had killed Dr Folsome the day before apparently. We also learn that Smithe's father was the one who began working on radioactive materials to power Jonah Jameson's Spider-Slayer Robots.

The Spider-Slayer eventually kidnaps MacGargan, planning to create something else out of him.


I personally did not find this second story very interesting at all. It does show us that there is going to be some improvements to Scorpion - adding to the growing list of Spidey bad guys. This could definitely be a start to something a whole arc.
Read More

The return of Gwen Stacy after a gruelling one issue absence! 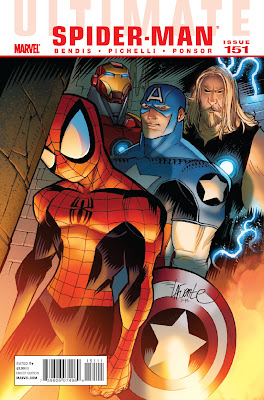 
One month ago, the Black Cat attempted to assassinate the Kingpin via sniper rifle, only to witness his death at the hands of Mysterio.


At Midtown High, Peter Parker has lunch with Johnny Storm and Bobby Drake. He attempts to get a hold of Gwen Stacy but has no luck. Lana Baumgartner joins them and Bobby asks her out. Judging by the expression on her face, Lana is less than thrilled with the proposal.
Two weeks ago, the Black Cat attempted to steal something from Mysterio's (formerly the Kingpin's) headquarters. She got caught in the act by Mysterio who, being impressed by her skills, offered the Cat a job. Black Cat refused and was able to escape thanks to her "good luck" powers. Mysterio was apparently unaware of the existence of whatever Black Cat was trying to steal and was surprised by what he found.


In her car, Aunt May leaves Gwen a passionate message on her cell phone urging her to come home. Just as she finishes Gwen appears outside her car. The two reunite and Gwen agrees to keep living with the Parkers. Just as Aunt May promises things will be more normal around the household, Iron Man arrives for Peter's superhero training.


Thoughts
Brian Michael Bendis delivered another great installment of this series but the real star of this issue was Sara Pichelli whose pencils, especially in the Black Cat/Mysterio scenes, looked gorgeous. As much as I'm looking forward to Mark Bagley's recently announced return to the series, Pichelli is making the wait a whole lot easier.
I'm glad Gwen will continue to be a member of the book's supporting cast. I was worried her departure in Ultimate Spider-Man #149 would be a lot lengthier. Looking forward to Peter's superhero training!
Read More 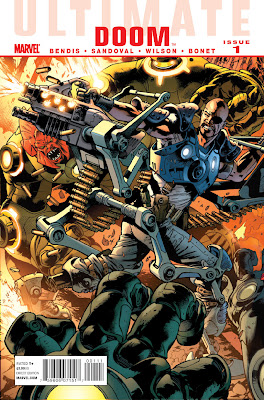 
Susan Storm confronts Reed Richards in the ruins of Project Pegasus about the attacks he was responsible for (check out Ultimate Enemy and Mystery for more info!). The confrontation quickly turns sour, and a fight breaks out in which the two former friends nearly succeed in killing each other. Nova realizes that Reed is the reason he was sent to Earth and attempts to blast him. However, Nova accidentally hits Reed's device, creating a wormhole that Reed is sucked into. Nova manages to save himself and Sue by teleporting them away.


Jessica Drew wakes up on an operating table being examined by the Roxxon brain trust. The brain trust introduces Jessica to their leader: Doctor Octopus!


At the Triskelion, Sue is brought into the emergency room, having sustained serious injury in her fight with Reed. Johnny loses it and demands that Nova take him to Project Pegasus. Nick Fury agrees, but just as the heroes are about to leave, Sue flat lines.


This was a solid, if frustrating issue to read. Brian Michael Bendis has set up a lot of interesting plotlines, but does not provide answers to any of them. Why is Reed doing this? What is his endgame? What's the story behind the Roxxon brain trust? There are no answers provided and as such we are left largely in the same place we were at, at the end of Ultimate Mystery #4. I have no doubt that Bendis has an epic conclusion planned for this series, but if you are a comic book fan on a tight budget this issue is not a must-buy. 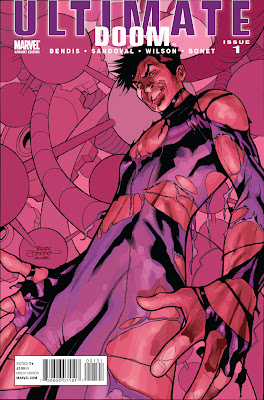