Wow, only 15 issues in and Ultimate Spider-Man is already reverting back to its original numbering. 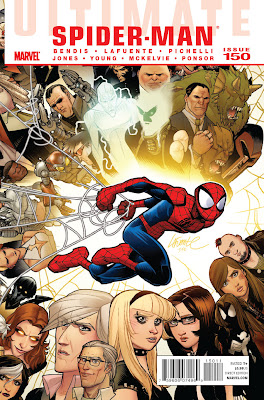 The Story
Spider-Man stops the Ringer from robbing a diamond exchange. Their fight causes massive amounts of property damage.
In light of the damage his fight with the Ringer caused as well as the Chameleon Twins incident, S.H.I.E.L.D. director Carol Danvers has a meeting with Iron Man, Captain America and Thor on what to do about Spider-Man. Each of the three heroes tells a story about an encounter they had with Spider-Man; Iron Man was impressed with the knowledge Spidey displayed when he saved him from Whiplash. Cap tells the story of how Spider-Man inadvertently ruined Cap's chances of capturing a group of A.I.M. agents who stole secret plans from the Triskelion. Thor tells the story of how Spidey helped him defeat the sorcerer Xandu. After listening to the opinions of the three heroes, Carol decides what to do about Spider-Man.
The next day Peter Parker comes home from school and finds Aunt May having tea with Carol Danvers. Carol informs Peter that he's going to superhero school!
Thoughts
This was a decent issue of Ultimate Spider-Man, though if you were not a fan of the series before, this anniversary issue is not going to convince you. Three different artists draw the three different stories told by the heroes. The best of these was by far the Thor story drawn by the incredibly talented Scottie Young. Peter going to superhero school is an interesting development, and I am willing to bet that this will be the central premise of the upcoming Ultimate Spider-Man television series.


This issue also contains a reprint of the Ultimate Spider-Man Super Special that came out a while back. For those of you who haven't read it, this is a fantastic story jam packed with terrific visuals from several different artists. It easily tops the main feature.
Congratulations Ultimate Spider-Man on reaching 150 issues! 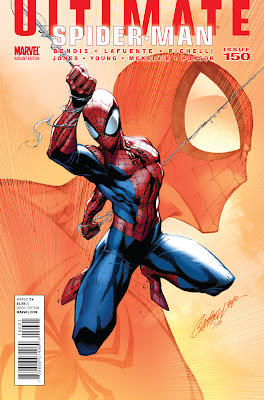 When it was announced that Norman Osborn's Dark Reign would be coming to an end after Siege, I thought the event would mark the end of the road for the character. Norman achieved what he always wanted to achieve after Secret Invasion, and now that his hold on power was coming to an end any of his subsequent appearances would have had to be about him trying to reclaim power. Norman in power is something I highly doubt Marvel is going to explore again. Consequently, I thought Norman would kick the bucket at the end of Siege.


Luckily, the talented minds at Marvel are far more creative than I. Is Norman's latest scheme worth your time and money? 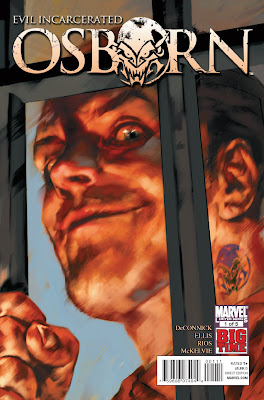 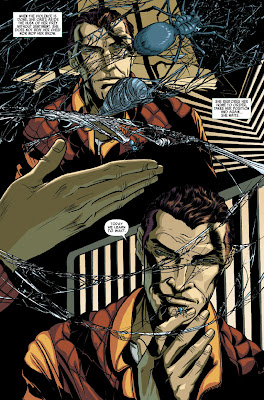 Norman Osborn sits in a prison cell at the Raft, biding his time until he can reclaim power.


Norah Winters and Peter Parker head out to lunch. Ben Urich has assigned Norah to write a follow-up on Norman Osborn but she's having doubts, having caved in when Norman threatened her back in Amazing #599. Peter encourages her to write the article.
A few senators from the subcommittee on human rights and the law gather to discuss the fate of Norman Osborn, who has yet to be charged with any crimes and stands the chance of walking away a free man. After some debate they decide to transfer him to a "certain privately operated facility." Sounds unpleasant.
A priest named Father Coulmier arrives at a mysterious "special containment centre" to speak with five prisoners; a demon entity named Pryor Cashman ("Kingmaker"), an alien reptile called Xirdal, a phasable entity called Carl Rives, a gifted chemical biologist named June Covington ("the Toxic Doxie"), and a South American chimera god called Al Apaec ("the Decapitator"). The priest does not have much luck getting through to them.
The senators from the subcommittee meeting inform Norman that he is being transferred.
Father Coulmier receives a call from one of the senators who informs Coulmier that Norman has been transferred. The senator tells Coulmier to "stick to the plan" and hangs up. Coulmier walks into his bathroom and takes off his shirt, revealing a goblin tattoo on the back of his neck.
Norah learns from her contacts that Norman has been moved from the Raft to an unspecified location. She immediately informs Ben Urich.
Meanwhile, Norman is given a cell next to the five prisoners.
Second Story - The Prime of Miss June Covington


We learn June Covington's back story through a prison interview. Bottom line: she's nuts.
Thoughts
I must admit, I was not expecting much from "Osborn" but Kelly Sue DeConnick has really surprised me. She has a great grasp on all the characters involved, particularly Norman Osborn, who comes off as a cold, calculating psychopath, the way I prefer him portrayed when not wearing a goblin mask. The story is intriguing and has had some great twists thus far. I'm interested to see how Norman interacts with the other five prisoners. I enjoyed Emma Rios' artwork on Shed and she continues to impress here.
Warren Ellis' backup story is brilliant and is reminiscent of his Thunderbolts run. It's worth purchasing this comic just for that.


I thought Norman Osborn would lose a lot of momentum after Siege, but it looks like he's back and better than ever. 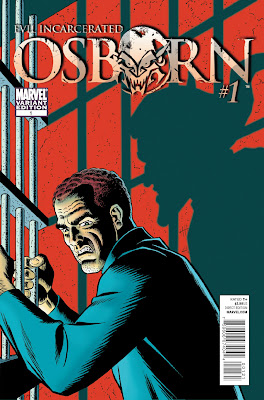