One of the complaints against the current Spider-Man comics was that Peter Parker was turned into Archie Andrews, a character incapable of change of growth or change. For these readers, there's no middle ground between a commitment to change approach, and having no growth at all. On the other extreme, some people wanted Marvel to go a lot further with their characters, truly adopting the Archie approach, asking for entirely self-contained storylines with no significant arc-to-arc continuity at all.


In this format, Peter Parker would not benefit from a status quo conductive to longer term stories, and there would be very few major changes to the status quo. In the rare event that there are any major changes, these would happen over the course of a single adventure.

At one point, this approach was the norm for comic books and televison. It predates either medium. The credit goes to Sherlock Holmes writer Sir Arthur Conan Doyle, who found a way to combine the addictive appeal of a serial with the accessibility of a short story.

Doyle explained in his autobiography Memories and Adventures:

It had struck me that a single character running through a series, if it only engaged the reader, would bind that reader to that particular magazine. On the other hand, it seemed to me that the ordinary serial might be an impediment rather than a help to a magazine, since sooner or later, one missed one number and soon lost all interest. Clearly, the ideal compromise was a character which carried through, yet installments were complete unto themselves, so that the purchaser was always sure he could relish the whole contents of the magazine. I believe I was the first to realize this and The Strand Magazine was the first to put it into practice.

When describing comic books, I'll use the term issue to issue continuity sometimes, but I don't mean it literally, as that suggests that the creative teams are limited to self-contained issues, and that multi-part stories are precluded. That may the preference for some readers who want every story to be done-in-one, but it's not a requirement for this type of approach.

Obviously, Part 2 picks up from Part 1. A TPB-length storyline could would literally have issue to issue continuity, but it could end without anything occurring that would be referenced in the next issue. Examples would include typical arcs from Batman anthology titles like Legends of the Dark Knight along with licensed comics for film and television properties, which tend to be inconsequential.

It makes the books more accessible if the status quo of one issue is exactly the same as it was a few months earlier. A new reader doesn’t have to expend any energy wondering about how things have changed, while a returning reader can jump right back in if the status quo is exactly the same as when he left the book. Late artists and writers will be less of a problem, as Marvel could just put in fill‑in work in their stead, and no one would care as neither project will have had any change to the status quo, preventing any confusion regarding the intended order. Reprints are also more appealing if there’s no difference between these and the new material.

There are also some significant disadvantages to this approach. In his book Everything Bad is Good For You, author Stephen Johnson noted that stories in television and movies have become more intricate, relying on the audience understanding prior developments. Compare Arrested Development and Community to the Honeymooners, or the Lord of the Rings series to the Sean Connery James Bond films in terms of narrative complexity. This has also become true of comics, and the storytelling would seem infantile to anyone who has seen the Sopranos or Lost if the writers couldn’t reference prior continuity or relationships, or feature several ongoing (and sometimes) intersecting plots.

Stories also seem more significant if there’s the chance of major ramifications later. Readers won’t be concerned with any private subplot if there’s no possibility that Peter Parker will suffer a bit. However, the chance that a landlord will evict Peter Parker is more of a concern if the reader knows that the next issue can begin with a homeless Peter looking for a place to stay. A battle between Spider-Man and supervillain is more interesting if there’s the possibility that Peter’s going to be dealing with the injuries in the next issue.

This was the case with the pre-Paul Tobin Marvel Adventures Spider-Man. But Tobin quickly brought continuity to the all-ages title, along with longer arcs and subplots. Paul Tobin's been able to parlay success in all-ages comics more effectively than any writer since Dan Slott. Rich Johnston thinks it's possible that Tobin is the most widely-read comic book superhero writer today.


A lack of clear issue to issue continuity was one of the flaws of the Brand New Day era of Amazing Spider-Man, when there were times ten issues could have been released out of sequence with very little impact. But I'm glad that this was fixed rather than ignored.


This approach has worked with Superman, as seen in Cary Bates's Action Comics and Mark Millar's Superman Adventures. But the writers are able to feature outlandish developments, before restoring the status quo. Spidey is too grounded for that.

Peter Parker's adventures (and subplots) were far more important to the appeal of the Spider-Man book than Clark Kent's private life was to the appeal of Superman. Pre-Crisis Superman often had no long-term subplots, so it didn't really matter what order issues came out in. You can't really say that about the Silver Age Peter Parker, starting with Amazing Spider-Man #9 or so. Elements of his private life in one issue (Gwen Stacy thinking he assaulted her elderly father, Betty Brant getting jealous of Liz Allen) could cause trouble for him for issues to come. 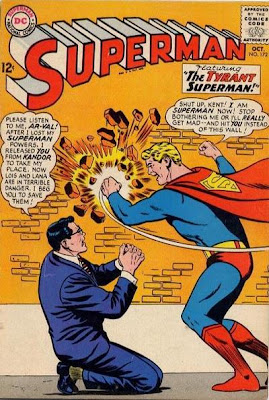 From what I've read of the Superman comics (much of Byrne's run, the first volume of the Showcase presents collection of the Weisinger era and a few Cary Bates issues) the Superman comics had a different structure, in that Clark Kent didn't change at all from issue to issue. Independent of the Superman plot, he almost always ended the story at the same place he began it. That's very different from Peter Parker, for whom stuff can change during the course of a story (he can be fired/ hired, piss off his aunt for the next year's worth of comics, dumped, meet a girl, etc.)

Spider-Man's life doesn't always change from issue to issue, but it sometimes did, going way back to Amazing Spider-Man #7. Usually it happened in little ways, with even minor events having consequences (IE- the principal calls Peter to his office to discuss a fight with Flash Thompson two issues earlier.) A key part of the series's appeal was to see what happens next to Peter Parker, and what the consequences for the actions would be.

It took the Superman comics a much longer time to adopt the idea of long-term subplots for Clark Kent, and they usually weren't as important for the book as Peter Parker's subplots were to Spider-Man. Let's compare a recent development in the Superman books (Clark Kent adopting a Kryptonian child in "Last Son") to a development in the Spider-Man books in the 1980s: Peter Parker's decision to drop out of college. Chris Kent tied into Superman's adventures, just as much as he did to Clark Kent, and when the "Last Son" arc came to an end, he went with it, leaving at the end of an arc.

That's the type of storytelling that quickly became a standard part of Amazing Spider-Man. And it took a lot longer to become a part of the Superman comics, which are often more traditional. It's still a part of the current Amazing Spider-Man, where there are long-term subplots with the supporting characters (such as J Jonah Jameson or Lily Hollister, the latter placing Peter in an awkward situation.)

The traditional form of storytelling is also done with Batman. Though he can have a smaller consistent supporting staff. He's uniquely suited for frequent cases involving new one-off characters, as Bruce Wayne has a lot of minor business associates and many potential romantic interests, along with the resources to travel anywhere in the world the Batman may be needed. This allows for much variety, even if he inevitably returns to Gotham City.

Even with a Spider-Archie approach, things can change. Recurring characters can die, hook-up or change jobs. New characters can be introduced. But these are rare, which does makes every new development more special. It's also not very subtle, when you suddenly have a two-part story with a lot of changes for the characters. Batman's New Direction in the 1960s would be an example.

There are still a lot of things you can't do without any arc to arc changes. Long-term plotting is severely limited. New perspectives of earlier tales (the basis for a lot of great twists) would be discouraged, as that involves referencing stories that new readers might not be familiar with. Character arcs typically require change across several storylines, so that can't really be done with this structure, which probably goes against a chief attraction of the Spider-Man books.

Peter Parker represents the best secret identity of any superhero. He's brilliant, often witty (hilarious actually), wracked by guilt and a bit flawed (sometimes selfish and angry) although he still has an excellent moral code, along with a tragic and perfect motivation. The question of whether Peter Parker or Spider‑Man is more compelling is a meaningless one, as no superhero book has such a perfect merging of secret identity and alter ego (Clark Kent, Bruce Wayne and Matt Murdock come close). The Spider‑Man stories are why you start reading, and the Peter Parker stories are why you keep reading year after year.

Having Peter involved in interesting prolonged arcs is crucial to his drawing power. So-called soap opera elements were essential to Spider‑Man's success, and are important in keeping Peter Parker's life interesting. It's worth noting that when some critics denigrate the "soap opera" aspects of the Spider-Man comics, they're referring to something that's part of high culture, as well as low culture. There have been romantic triangles in War and Peace, The Brothers Karmarazov, The Great Gatsby and Madame Bovary.

Most superheroes have a default status quo. Bruce Wayne is Batman with Alfred as his trusty butler and James Gordon as Gotham City's trusted commissioner. There may be a few Robins around, but that's usually not essential. Superman is a reporter for the Daily Planet, while his coworkers are Jimmy Olsen, Lois Lane and Perry White. The Fantastic Four are Reed Richards, Johnny Storm, Susan Storm Richards and Ben Grimm.

There are other variations, but these could be window dressing. Sometimes there may be even be a longer arc in which the status quo changes, but it's restored to the default setting soon enough. Someone else may become Gotham City's police commissioner after James Gordon is framed, but that situation will be resolved pretty quickly.

And this is one of the most engaging things about the character. It also makes the character poorly suited for an approach that requires complete consistency.