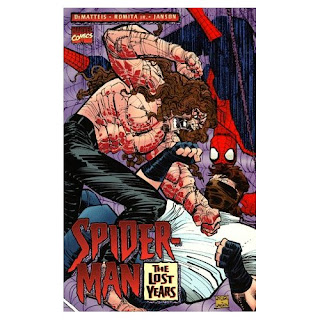 J.M. DeMatteis and John Romita's, "Spider-Man: The Lost Years," is a story about Ben Reilly and Kaine but at it's heart it is all about Peter Parker. Joe Quesada once said, and I'm paraphrasing here, that the reason that fans are so passionate about Peter Parker is that they see so much of themselves in him, that a perceived slight against his character is a slight against them. His clones give the writers opportunities to explore facets of his character that would not be possible otherwise.
"Spider-Man: The Lost Years," takes place in the rain drenched streets of Salt Lake City. Detective Jacob Raven is fighting a losing battle against the local mob led by Vincent Tannen. At this point, three years into his exile from New York, Ben Reilly rolls into town. His plan is to get a job at the university, make a few bucks and get out. That's his life at this point. Kaine is already there, spending his time in seedy bars, proving that at least one Parker can drink. 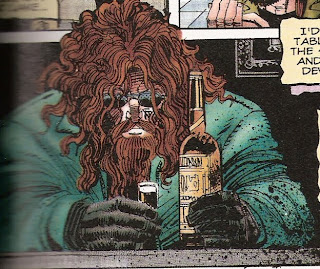 Throughout the mini-series DeMatteis draws parallels between Ben and Kaine, when we meet them they both appear resigned to their individual fates, Ben even convinces himself he has a better life than Peter. Their blissful ignorance is blown apart when they both fall in love with women who are also hiding their true identities. Ben meet Janine Godbe, a waitress with more than a passing resemblance for Mary Jane, Kaine falls for Louise Kennedy, Raven's partner. Of equal importance in this story is Jacob Raven whose story, like Ben and Kaine, is defined by the woman he loves and loses.
What's interesting about this mini series is the sense of dread you feel while reading it. This story is after all a prequel to the clone saga. Going in we knew whatever happiness Ben gained he would eventually lose. Worse still, we knew that not only would Louise die, she would die by Kaine's hand. He would kill the only person that gives him hope and ultimately he would kill her because he is Peter Parker. One of the more endearing traits of Peter's character is his unwavering, almost naive sense of hope. More than any other superhero, with the exception of Superman, his life has been about loss, his parents, Uncle Ben, Captain Stacey, Gwen, Harry, his child and eventually Ben and Kaine. But he doesn't end up brooding in a cave, afraid to live life. He endures because, despite his protests to the contrary, he is an eternal optimist. Kaine was as well, he meets Louise and Kaine thinks that life can be beautiful. Her betrayal as a member of Tanners gang breaks Kaine, he loses that optimism, he is no longer Peter Parker. It is not the cellular degeneration that turns Kaine into a monster, it is the death of hope. 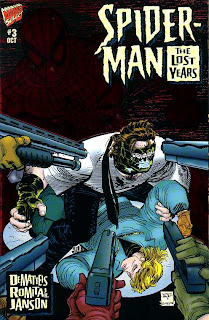 This is where the parallels between Kaine and Ben end, as it is the reveal of Jannie's secret that pulls her and Ben closer together and gives the story a bitter sweet ending. They are together in the end but it clearly won't last. Ben also reveals his secret to Jannie, even about being a clone and Ben's old favorite about being less than a man. Remember what I just said about Peter being the eternal optimist? That's as much about him as it is the people around him. The supporting cast is that important. It wasn't dressing up and playing hero that made Ben give life another shot. It was Janine, all Janine.
I should take a moment to talk about the art in this book. Online and in a lot of reviews I see artists criticized because their art isn't the most attractive to look at, it's not beautiful enough. Comic book art is about story telling, the idea is that if you covered the word balloons you would still get the story. That is what happens here. John Romita is the master of story telling. But still attractive artwork is nice. Romita has that too. He is simply the best.
At the beginning I said that this was a story about Peter Parker, it's a story about what hope does for him. You take it away from him and he becomes a monster, just like he did during DeMatteis, "I am the Spider," run on Amazing. You give him back hope and you get a man like Ben Reilly, who on his first night back in New York would save Peter's life. He saved the life of the one man whose death with solve all his problems. He did that because he still had hope his life would work out.

So, its been more than a year since I've posted part 1. Obviously, back then I had no intention of making a part two. I know its pretty lame to keep rambling about how this comic used to be, nonetheless, here's a few extra panels just to remind fans of what is no longer, unfortunately.

This was not too long after the two got back together after being separated for a while. Peter had been putting off sleeping with MJ till he was relaxed and had cleared his mind of whatever he was going through.

This scene leads to the other scene, of which part of it can be found in Spider-Man reviews: Flashback.
Below is another scan from when Peter visits MJ on her 'big day' at the theater. The scan below are just his thoughts to himself.

Anyway, the reason why I'm posting this again is because I found a little facebook page created by Stuart Green from the Spider-Man crawlspace boards.  And on the page there is a link, for people to petition/sign and bring back the Marriage. ( Not that this will ever get across to the writers in my opinion) But why not have a go! If you prefer ASM the way it used to be that is.