The Best of Brand New Day

With the release of Amazing Spider-Man #647 the Brand New Day era of Spider-Man has come to an end. This has left some fans saddened, others breathing a sigh of relief, and others still waiting for One More Day to be retconned. In order to properly say goodbye to this era of Spider-Man, I considered writing a series of feature length articles examining the history of Brand New Day from start to finish, thoroughly analyzing what went right and what went wrong. Then I realized that such a venture would take far too much time and effort. So instead here is a top 10 list I slapped together during a rare moment of free time. This particular list counts down my 10 favourite stories to come out of Brand New Day. Fear not haters, a Worst of Brand New Day list is coming soon. Until then... 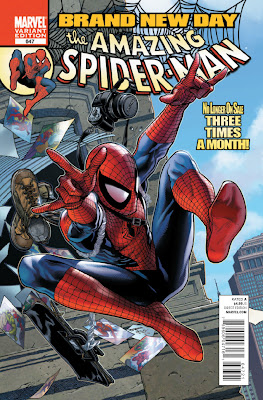 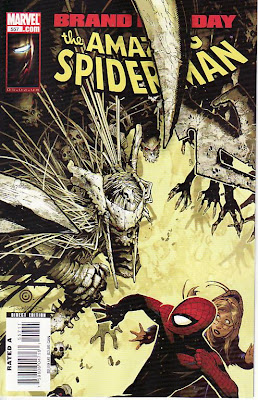 Zeb Wells achieved quite a bit with his first Amazing story. Not only did he deliver the first great Brand New Day story but he also accomplished what JMS couldn't do during his lengthy run on Spidey; make Spider-Man and the supernatural work. Wells also showed us that, of the original members of the Spider-Man Brain Trust, he had the best handle on the Webhead's sense of humour; giving Spidey some great interactions with Wolverine, a homeless man named Vern and a Mayan Deity. Having some gorgeous Chris Bachalo art didn't hurt either.
9. Mysterioso (ASM #618-620) by Dan Slott & Marcos Martin 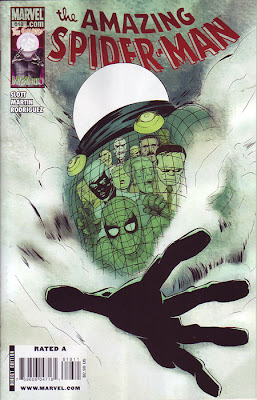 Dan Slott did a great job of bringing back my favourite Spidey villain, the real Mysterio, in all his glory. By making him a glorified con man who gets a rush out of pulling off a scam, Slott made Mysterio cooler and more relevant than he's been in a long time. Slott also managed to inject some life into the supporting cast, old and new, by corrupting Aunt May and giving Carlie Cooper an interesting dilemma. Throw in some brilliant, Ditko-esque artwork by Marcos Martin and you have the ingredients for a great Spider-Man story. If this is any indication of what Slott's upcoming Big Time arc will be like, sign me up.
8. Platonic (ASM #583) by Mark Waid & Barry Kitson 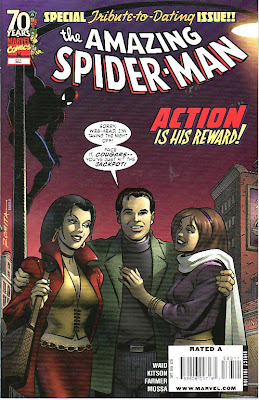 One of the positive things Brand New Day did for Spider-Man was bringing his supporting cast back into the spotlight. One successful example would be Betty Brant who is given the spotlight in this one shot story by Mark Waid. In addition to showing us Betty's place in Spider-Man's world, this issue is also a touching reminder of Peter Parker's dedication to his friends.
7. Flashbacks (ASM #574) by Marc Guggenheim & Barry Kitson 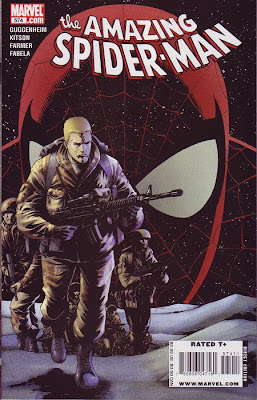 Marc Guggenheim's story of Flash Thompson in Iraq instantly made him one of the most compelling characters in Spidey's supporting cast. This story is also a great tribute to the men and women fighting over seas.
6. Red Headed Stranger (ASM #602-604) by Fred Van Lente & Barry Kitson 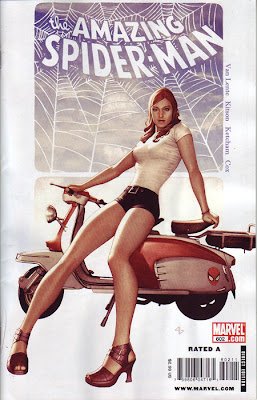 Fred Van Lente's psychotic depiction of the Chameleon was by far one of the most enjoyable and interesting interpretations of the character I've ever read. The issue he spends posing as Peter was brilliant, giving us insight not only on the Chameleon's character, but Peter's as well. I should also mention Barry Kitson, as his name is appearing frequently on this list. Throughout Brand New Day Kitson always brought his 'A' game to Spidey, and for that he deserves props.
5. Unscheduled Stop (ASM #578-579) by Mark Waid & Marcos Martin 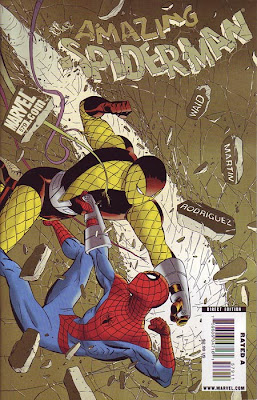 Marcos Martin was the true star in this tale of survival featuring Spider-Man and a group of people trapped inside a collapsed subway tunnel. Martin's artwork successfully highlights the claustrophobic nature of the story and Waid does not disappoint in the writing department. This story also introduced us to J. Jonah Jameson's father, one of the most successful new Brand New Day supporting cast members.
4. Birthday Boy (ASM Extra #2) by Zeb Wells & Paolo Rivera 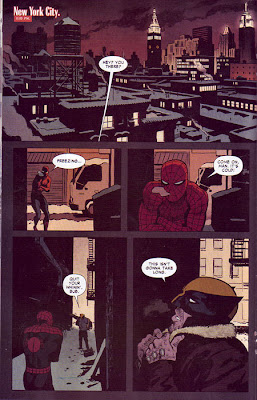 Zeb Wells' tale of two friends going for a drink, backed by some great Paolo Rivera artwork, effectively shows why two characters as different as Spider-Man and Wolverine would be friends. It is also a loving tribute to nice guys everywhere.
3. Grim Hunt (ASM #634-637) by Joe Kelly, Michael Lark, Marc Checchetto et al. 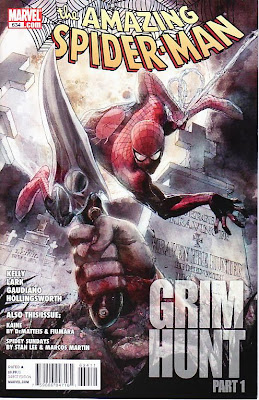 Grim Hunt was supposed to be the epic finale that the Gauntlet (disjointed as it was) was building towards. It did not disappoint. Joe Kelly's story was unapologetically dark, and included several nods to Spider-Man continuity. One of the things I admire about Grim Hunt was that it wasn't afraid to shake things up; the deaths of Mattie Franklin and Madame Web, Kaine's sacrifice, Kraven's return and several other shake-ups proved that Spider-Man's world could still undergo big changes. Artistically, Michael Lark's artwork in the first two issues was stunning, and Marc Checchetto delivered his best Spidey work to date in the latter two. It's a shame Lark's work in the last issue was marred by art assists.
2. SHED (ASM #630-633) by Zeb Wells, Chris Bachalo & Emma Rios 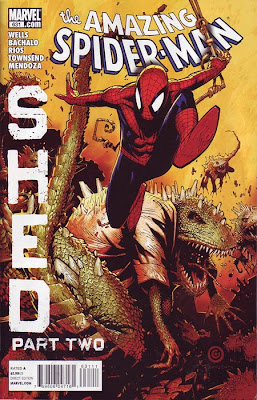 With Shed, Zeb Wells delivered one of the best (and my personal favourite) Lizard stories in years. Wells turned the Lizard character on its head by removing both Curt and Billy Connors from the picture, turning the Lizard into a creature struggling to balance its primitive instincts with the intelligence, memories and emotions of its former host. It's a shame portrayals of the Lizard since then have lacked the depth of Shed, but hopefully Wells will eventually return to write a sequel.
1. Rage of the Rhino (ASM #617), Endangered Species (ASM #625) by Joe Kelly & Max Fiumara 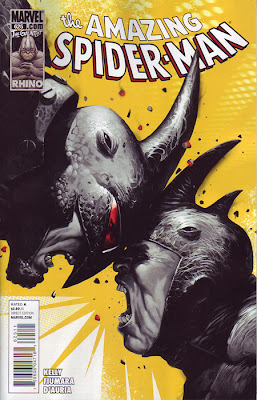 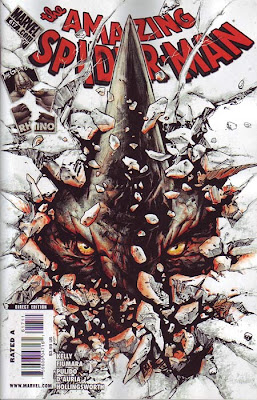 Okay, I might be cheating a bit here. You could argue that #617 and #625 are two separate stories. If you feel strongly about it, pretend that I placed one of them in the #2 position and bump the other stories down one (you will have eliminated #10, but Wells had too many stories on this list anyway). Joe Kelly's story of the Rhino's redemption and subsequent fall was emotionally powerful; you genuinely feel happy for him when he finds love and rejects his old ways, and you feel equally saddened by the way it tragically comes undone. That we care so much about Aleksei and Oksana's relationship after only one issue is a testament to Kelly's skill as a writer. A shout out should also be made to Max Fiumara, who illustrates both issues; I have never seen a more primal, scary looking Rhino. And I don't know whose idea it was to have the "new Rhino" use a live horse as a weapon in issue #617 so I'll just say bravo to all involved.
That about wraps things up. A big thank you to Steve Wacker, Tom Brennan, the Web Heads and all the talented artists, letterers and Marvel staff who worked hard to bring one of my favourite eras of Spider-Man to fruition. These ten stories were not the only good ones to come out of Brand New Day. But no run is perfect; stay tuned for the Worst of Brand New Day coming soon!
Read More
Newer Posts Older Posts Home