Here's an interesting fact about this issue. The issue, titled Carnage does not feature a single scene of Carnage. It does however revive some old, long unseen characters, aka, Doppelganger and Shriek.

It starts with a usual scene, of an armored truck trying to escape while another car tails behind it, trying to cut it down/ catch it/ rob it. Swinging behind is what seems to be Spider-man - except that he has 6 arms and a few eyes.

The scene jumps to a seminar where Tony Stark is seated. Peter made some excuses not to go for this seminar by a 'Michael Hall.' Michael hall is supposed to be a computer manufacturer who has developed some chip that can transfer thoughts into movement of an external prosthetic robot/ arm. ( Basically some technology that, if existed today would be used to create new arms and legs for the handicapped.) Check out the image below.

After the seminar, Stark spots the weird looking Spider-Man swinging around the streets. He calls Spidey to see if its him. Peter is still at his apartment and decides to go help Tony catch this imposter. Iron man first confronts the creature, who trashes his metal ass. Spidey comes a little later and explains that the creature is non other than Doppelganger, as illustrated below.

Spidey explains that previously, everywhere Doppelganger went, so did an angry mob. The angry mob creating powers did not come from Doppelganger, but from someone else on the team Carnage led instead. Just as he is about to mention who it is exactly, an angry mob appears out of no where. Iron man and Spidey fail miserably at controlling the mob until some blue and red robot guys appear, and sort of web everybody up.

The flying robots then take a lethal shot at Doppelganger. Just as the shot is fired however, a civilian jumps to take a partial hit. (Clearly mind controlled). We later find that Shriek was in the truck that Doppelganger was chasing. Doppelganger is seen lifeless and contained, by whoever was transporting Shriek.

Thoughts
So at this point everyone is probably wondering who Shriek is? Shriek, actually appears in the image above with carnage and Doppelganger ( The chic with a white face, black eyes, just above Spidey's head). Her powers are pretty much chaotic, causing angry mobs and etc. She probably controlled the innocent guy to block the hit meant for Doppelganger. The weird thing is that Doppelganger usually has eight arms, not six. There has to be some interesting explanation for it. Also, for those who do not know yet, Doppelganger and Shriek had a thing going on before ( mother-son relationship).
Read More 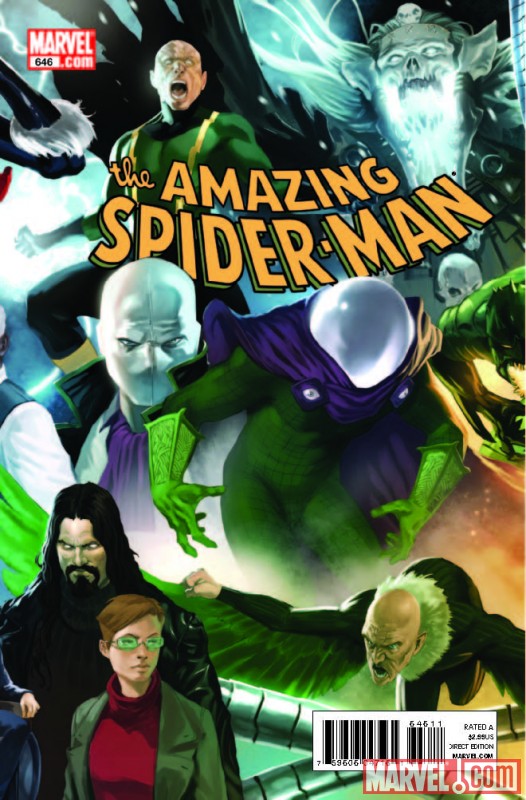 This issue was a little bit shallow. Sure it revealed a little bit of important information, but after reading it, it seemed to me as if the whole issue took place in 5 minutes.

The Story
The issue starts with the Lizard, using Dr Connors' "Mammal brain" to take care of the child he just kidnapped. The lizard has appeared to have made for himself a small lab at his hideout. The lizard talks to himself, stating how he hates mammals, but hates Norman Osborn even more. In case you are not sure what has been happening, please check out Amazing Spider-Man 645.

In the next scene we see Doc Ock, making his way to the lizard's hideout when he is greeted by Spider-Man. Spider-Man, in a way asks if they can team up for a while, to get the baby back from the Lizard. Before Doc Ock can fully agree he becomes mind controlled by the Lizard. ( Or rather, he becomes reptile brain liked due to close proximity to the Lizard) See Amazing Spider-Man 632, or some issue around there.

Spidey explains how he took the antidote before coming, knowing that this would happen, from past experience. As he talks and dodges Dr. Ock's attacks, the two come closer to the Lizard. Spidey eventualy tangles Dr Ock's tentacles ( only possible because of his now primitive reptilian brain) and defeats him.

Spidey then confronts the Lizard, explaining to his enemy that he has some improved poison webbing. The webbing was essentially just made of the serum/ antidote that he drank before coming to avoid becoming 'lizard brained' like Dr. Ock. After threatening to squirt his new webbing down the Lizards throat, the Lizard agrees to return the child, saying that there is something wrong with the baby.

After some conversation and blood sampling in the Lizard's small lab, Spidey realizes that the child is not Norman Osborn's after all. Doc Ock manages to return to the scene at the right time, prepared to kill the Lizard for making him "stupid."

Spidey leaves as the two fight. He also leaves a sample of the kid's blood so Dr. Ock can see for himself, when he is back in his right mind that the kid is not actually Norman's son.

Elsewhere, MJ receives a text from Peter stating that he is fine, and so is the baby. Lily, upon hearing this decides to flee, for the sake of her child's security. In the only scene that takes place a little later, Spidey meets Harry in the Avengers tower, does some tests, and finds out that Harry is actually the father of the child.


Like I mentioned at the start, this whole issue seems as if it takes place in 5 minutes. Obviously that can be debated, but still. It's good to know that we don't have another wild goblin to be baby. What I'm wondering is  why Carlie isn't wondering how come Peter didn't text her, but text'd MJ instead. Other than that, there really isn't too much to think about this issue.
Read More
Newer Posts Older Posts Home