A look back at the four issues of the second chapter of Brian Michael Bendis' Ultimate Trilogy... 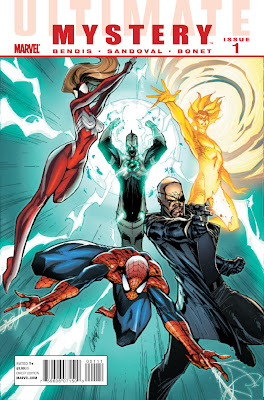 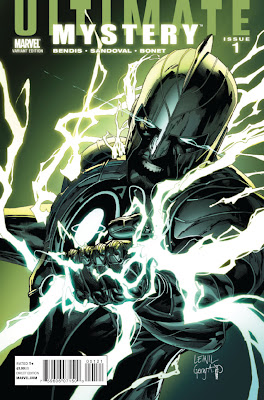 Captain Marvel arrives at Project Pegasus (a facility that houses powerful artifacts like the Wand of Watoomb and the Cosmic Cube) and informs the head of security that Nick Fury sent him to help protect the facility.
Spider-Man meets up with Spider-Woman (i.e. his female clone) and the two agree to work together to find out who was behind the attacks.


At the Triskelion, Ben Grimm informs Sue and Johnny Storm about the recent change his powers have gone through. He is now able to turn his powers on and off, and when he turns his powers on his body emits a purple glow. It seems his previous orange, rocky skin was just a cocoon. Their joy at this development is interrupted by Carol Danvers and Nick Fury who enlist their help in finding out who murdered Reed Richards.
Nova, (AKA Rick Jones) appears outside Project Pegasus and is quickly put down by Captain Marvel. Nova explains to Marvel that the Watchers of the Universe have sent him to stop the destruction that is to come.
Issue #2
Jessica Drew (Spider-Woman) successfully bluffs her way into a job at Roxxon Indus 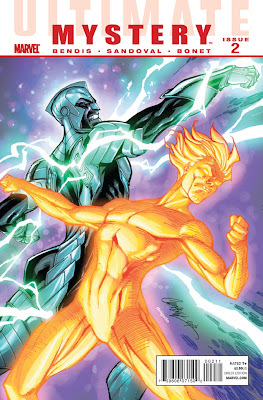 tries, becoming a member of their "brain trust."
Captain Marvel questions Nova further but it quickly becomes clear that Nova doesn't know anything beyond what he's already said. During their conversation, Marvel's armour becomes compromised, causing him to go nuts and attack Project Pegasus. He destroys the facility and presumably kills all the security personnel.
Spider-Man meets up with Spider-Woman, who informs him that she is now a Roxxon employee. Her plan is to find out what Roxxon is up to so she can bring them down from the inside. Spidey has a role in her plan too, but she doesn't tell him what it is.
The Fantastic Three and Nick Fury examine what remains of the Baxter Building, hoping to find a clue as to who attacked them. They are suddenly attacked by Captain Marvel. 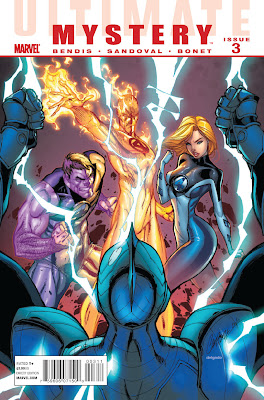 At the wreckage of the Roxxon Industries building, Jessica Drew is introduced to the rest of the brain trust; Dr. Arnim Zola III, Misty Knight, Nathaniel Essex, Dr. Layla Miller and Dr. Samuel Sterns. The brain trust is escorted to a safe location when word gets out that the Baxter Building is being attacked, again.


At the Baxter Buliding, the Fantastic Three and Nick Fury are trying to subdue the out-of-control Captain Marvel. Nova also joins the fray. During the battle more of the Baxter Building collapses forcing Sue to use her force fields to protect everyone from the debris. Once the dust clears, Captain Marvel is out cold and Sue and Nova are missing.


While being sequestered, the brain trust manages to trick Jessica into revealing that she is not who she says she is.


It turns out Nova teleported him and Sue to the remains of Project Pegasus before they could be crushed by debris. Sue notices a mysterious figure roaming the remains the facility and follows him. She discovers that this person is the one responsible for the attacks: Reed Richards!
Issue #4


11 years ago some bullies give the young Reed Richards a swirly. Ben Grimm intervenes and saves him. Later that night Reed's mother comes into his room and tries to comfort him but doesn't get very far. Reed's father storms in and has a fit because Reed disassembled the blender. After smashing a few things he leaves the room, leaving Reed more distraught.


Back in the present, Carol Danvers, Ben Grimm and Johnny Storm watch as Nick Fury interrogates Captain Marvel. Marvel claims to know nothing about what happened to him but Fury doesn't buy it. 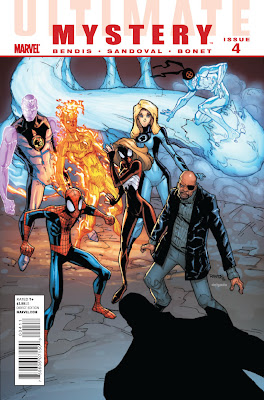 One year ago, during the events of the Ultimate Power miniseries, Reed surrenders himself to the Squadron Supreme after being accused of destroying their world (he wasn't really responsible).
Months ago after the ultimatum wave hit, Reed sits in his lab with Ben lamenting over how he created Doctor Doom (the one who set the events of Ultimatum into motion). He runs computer simulations in which Doom has his way and they all lead to death and destruction. He implies that the only way to stop Doom is to kill him.


After being found out by the brain trust, Jessica webs them up and tries to make a run for it. Dr. Samuel Sterns transforms into a Hulk-like creature and knocks her out.


Sue arrives in the middle of Marvel's interrogation in bad shape. Before collapsing she reveals that Reed is the one responsible for the attacks and that he's not done.


Ultimate Mystery was a well written and well drawn series. The dialogue was superb; the interaction between Spidey and his female counterpart in issue #1 was priceless. Rafa Sandoval's artwork was equally fantastic. The plot is intriguing and has me excited for Ultimate Doom.


The only problem I have with this miniseries is that it lacks a beginning, middle and end. These issues are clearly parts 5 to 8 of a 12 part story, and I'm having trouble figuring out why they just didn't make this story a 12 issue miniseries. If you haven't read Ultimate Enemy, than Mystery is going to confuse you. Also, chances are this story isn't going to mean much to those of you who are not well versed in Ultimate Universe continuity.
Read More
Newer Posts Older Posts Home