The Chameleon has taken a wrecking ball to Peter Parker's social life, and now he has to pick up the pieces... 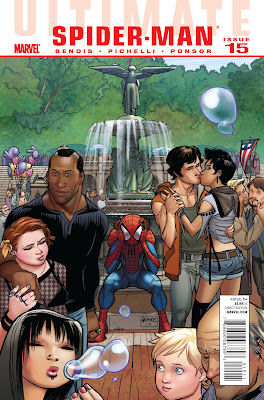 
Shortly after delivering the Chameleon Twins into S.H.I.E.L.D. custody, Peter Parker has a heart-to-heart with Carol Danvers regarding his role as Spider-Man. She advises him to stop being Spider-Man, and that the next time she has to clean up one of his messes she will force the issue.


The next morning Peter has another heart-to-heart, this time with Aunt May. She tells Peter that what happened was not his fault and that he should talk to Gwen.


At school Gwen talks with Mary Jane about the Peter impostor. Gwen blames Peter for what happened and no longer wants to be his girlfriend.
Ben Urich and Robbie Robertson visit J. Jonah Jameson in the hospital. JJ informs them that he knows who Spider-Man is and wants to do everything in his power to protect him, starting with writing a story for the Daily Bugle website clearing Spidey's name.


Back at Midtown High a new girl named Lana Baumgartner joins Peter's class. Peter recognizes her as the girl from the mother/daughter supervillain team that called themselves the Bombshells (whom Spidey fought in UCSM #2). Peter confronts her about her identity after class, and the two hit it off. With her mother in prison, Lana seems to want to get her life back on track. Gwen and MJ watch from a distance, both annoyed that Peter is chatting up the new girl when he still hasn't spoken to either of them.


Peter goes to speak with MJ in the computer lab when he spots Jameson's article on MJ's laptop. He expresses disbelief that JJ didn't out him. MJ tells Peter that the Chameleon could sense that she was still in love with him and that was the reason he made a move on her. Embarrassed, MJ leaves and advises Peter to talk to Gwen.


Unfortunately Peter doesn't get the chance, as when he gets home Aunt May informs him that Gwen has left.


Thoughts
This issue marks the debut of artist Sara Pichelli on Ultimate Spider-Man. Her artwork definitely has a similar look to David LaFuente's, and like LaFuente's work, it will probably take me a while to warm up to it. She's a great artist; I've just always been more of a Bagley person.
I was surprised to see Bombshell/Lana become a member of Peter's supporting cast. I always expected her and her mother to be one of those running gag supervillains like Ultimate Shocker. She seems like a fun and interesting addition, even if it is a little hokey to have another member of the cast with superpowers.


Ultimate JJ's desire to protect and exonerate Spidey is a nice contrast to mainstream Jonah. I love how he actually announces in his article that he knows who Spider-Man is but isn't going to say. That's just asking for trouble.
This was another stellar issue of the best Spider-Man book on the stands right now. Spidey fans owe it to themselves to check it out.
Read More
Newer Posts Older Posts Home