Spidey gets his ass kicked. 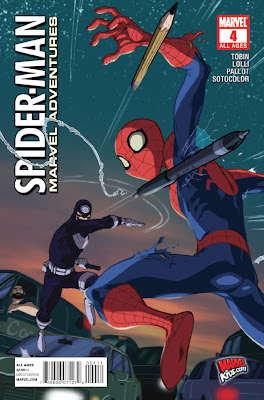 
The story starts with Bullseye giving Spidey a sound beating in front of a crowd of people. 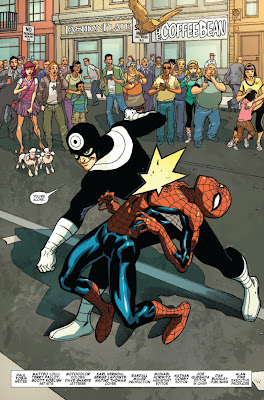 Three hours before that; Peter Parker's girlfriend "Chat" (who has the mutant ability to talk to animals) asks him if he can take care of her pet owl "Flapper" for the afternoon to which Peter agrees.
Two and a half hours before; George Stacy gets into an argument with his daughter Gwen about her dating Carter Torino, whose family runs the maggia. The argument ends with Gwen storming out of the apartment.


Two hours before; Spider-Man saves a man from getting mugged, but gets a mixed reaction from a crowd of people.


One hour before; Carter tries to get his Dad to back off of Spider-Man but has no luck.


Bullseye knocks a cat off a building but Spider-Man manages to save it (not knowing Bullseye was responsible). Bullseye then decides its time for him to finally confront Spider-Man.


Spidey meets up with Chat in an alleyway when the two are suddenly attacked by Bullseye. Spider-Man tells Chat to run and engages Bullseye. Using his superior fighting skills Bullseye quickly gains the upperhand. During the fight Bullseye uses one of his projectiles to blow up a gas tank and Spidey gets caught in the blast. Critically injured, Spider-Man attempts to escape by scaling the side of a building. Unfortunately for him, Bullseye makes it to the roof before him. Bullseye throws a blade into the air, slams Spidey to the ground, and waits for the blade to land in Spidey's head. Spider-Man is saved by Flapper, who puts himself into the path of the blade. Angered, Spider-Man summons the strength to knock Bullseye off the roof; a fire engine breaks his fall. Critically injured and exhausted, Spider-Man collapses.
Thoughts
Spider-Man's fight with Bullseye was surprisingly brutal for a kid's book. Paul Tobin does a good job of making the character work in an all ages title without watering him down. Although Bullseye doesn't kill any people this issue, he did get to murder several innocent birds, making him an instant hero to statues and car owners everywhere.
Although not much of interest happens beyond the fight with Bullseye (which was awesome) this was still the best installment of Marvel Adventures Spidey since the title's relaunch.
Read More
Newer Posts Older Posts Home