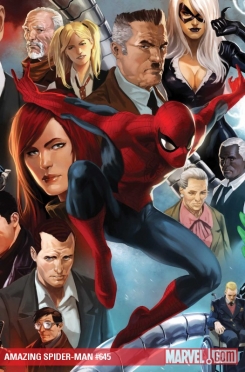 The origin of Species series seems to be getting better. This is definitely the best of the last few issues. First of all, we have a really cool cover page for this issue. We see some Batman Version of Spidey here. Recently, we've been seeing that Spidey is pretty much invincible when he's in feral mode, even without his venom suit.

Story- continuation from Amazing Spider-Man 644
The issue starts with a conversation between two police officers. They're discussing rumors heard regarding Spidey. To sum it up, rumors have it that the friendly neighborhood Spider-Man has been sighted not looking  very friendly.

Chameleon is seen with the baby, video conferencing with Octopus. Dr Ock explains how he need the baby's special blood to possibly give himself a new body. Elsewhere, we see Harry, looking at two cylinders of green goblin serum.

The scene then jumps to MJ and Lily ( Menace), who are hiding in a panic room. Lily, insists on getting a handphone. MJ gives hers, and the grateful Lily begins typing a whole lot of numbers. Outside the panic room, MJ's friend is guarding the door with a pistol. Carlie, somehow, knowing where MJ and Lily were, comes into the house asking to see her friends. Unfortunately, she did not realize that she was being followed by Tombstone, who barges into the house ad breaks the door of the panic room.

In an unnecessary scene, Carlie, bravely tries to stop Tombstone from getting to Lily by firing a few shots at him. As Tombstone turns around to take care of Carlie, Lily presses the last, of many buttons on the cell phone. Just then, her Menace glider comes flying into the wall and crashes into Tombstone.

When asking about Peter, MJ covers for him letting Carlie know that he called saying he was safe. Spidey apparently took him someplace safe during the event at the coffeeshop. ( Amazing Spider-Man 642)

Coming back to Spidey, every villain who comes in his way gets beaten badly. Slowly, Spidey gets some info that Dr. Ock has been working from the Kravinoff mansion. Naturally, Spidey heads off to the Kravinoff Mansion.

He finds the Chameleon there, who, tells Spider-Man everything that had happened out of fear - including how he pretended to be Harry. Spidey's face changes when he realizes that the baby is still alive. Unfortunately, the Chameleon tells him that the Lizard took the baby before he was able to deliver to Dr. Ock.

Thoughts
This story is starting to look good. Spidey is portrayed like an unstoppable Batman, as mentioned earlier. We have more unnecessary Carlie scenes, possibly to build some foundation for a bigger role she might play in the future. Probably the most mysterious scene in this issue would be Harry, with the Goblin Serum. In Amazing Spider-Man 644, he mentioned that he had a plan. Hopefully, he does not turn bad again.
Read More

Peter is rescued, but the damage is done. 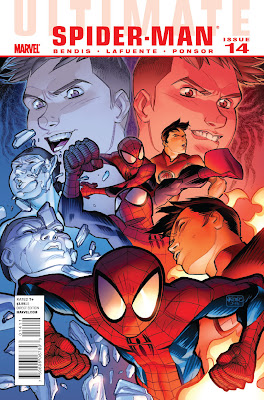 
The Human Torch and Iceman confront the Chameleon, who in the midst of robbing an armored truck. After failing to convince the two that he is Peter Parker, Chameleon makes a run for it.


At the Chameleon Twins' hideout, the Chameleon's sister tells Peter that if he does not reveal the confidential information he knows about SHIELD and his fellow heroes, her and her brother will kill his family and friends. Her brother suddenly bursts in and frantically orders his sister to kill Peter so they can leave. Peter manages to regain his strength and fight off the siblings long enough for Johnny and Bobby to arrive and finish them off. Johnny takes Jameson, who is barely alive, to the hospital. The Spider-Friends send the Chameleon Twins into SHIELD custody and return home.


Jameson later wakes up in the hospital with one word on his lips: "Parker..."

With the exception of Jameson's survival, Bendis' conclusion does not offer much in the way of surprises. The Spider-Friends save Peter and that's about all that happens. Don't get me wrong, I'm looking forward to all the ramifications this story will bring, it's just that none of them occur in this issue.


This was a solid conclusion to a great storyline. Although not as psychotic as his Marvel Universe counterpart, it was still fun to see the Chameleon pose as Peter and mess up his life. As always, David LaFuente's art was brilliant throughout. Ultimate Spider-Man has been on a role since the relaunch. Spidey fans do themselves a great disservice by not picking it up.
Read More
Newer Posts Older Posts Home