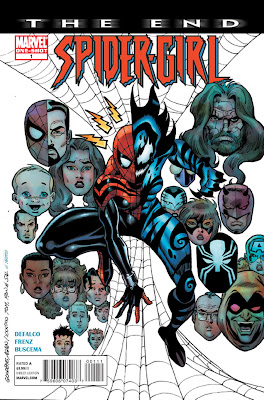 
We begin in the not too distant future where an older woman, who looks suspiciously like May "Mayday" Parker, is about to tell a group of children the story about the end of Spider-Girl.
Flashback to the present where Spider-Girl searches for April but has no luck. She returns home.
After school, the next day, May heads to Cafe Indigo with Davida, Courtney and Wes. On her way there her spider-sense warns her that April is following her. After making a quick excuse May changes into Spider-Girl and confronts April. April warns her to stop being Spider-Girl or she will kill her. Spider-Girl refuses and the two of them start to fight. Over the course of their battle the two of them end up in an abandoned building. April accidentally hits a fuse box causing the building to catch fire. As the roof begins to cave in Spider-Girl saves April from getting crushed by the debris. Realizing that the building is about to explode, Spider-Girl fires a web ball that knocks April out of the warehouse. The building then explodes, taking Spider-Girl with it.
Back in the future, we learn that the woman who was telling the story was actually April. After May died, and after she failed to take her place, April started killing every supervillain she came across. The authorities and the superhero community failed to stop her. The government then turned to an organization called Blackworks, who used samples of the Carnage symbiote to try and turn ordinary soldiers into a team of symbiote powered bio-predators. Unfortunately, things went horribly wrong, and the bio-predators started either slaughtering or absorbing people into their ranks. April led the resistance against the bio-preds, and now the compound which she resides in houses the last of humanity.
The compound quickly comes under attack by the bio-preds. While the surviving Avengers keep them distracted April heads to the lab of Cassie Lang, who has managed to get a time machine operational. Just as the bio-preds close in, April travels back in time.
April returns to her and Spider-Girl's final battle. Unfortunately, she materialized inside a wall. Unwilling to give up, future-April manages to transmit all her memories into the head of present-April via her alien symbiote. Realizing the error of her ways, present-April knocks May out of the warehouse, just as she is crushed by debris. The building then explodes, taking both Aprils with it.
Back at home the Parker family mourns the loss of April. Hearing the doorbell, May answers the door and finds Wes standing on her porch. Wes reveals that he knows May is Spider-Girl. After a brief conversation the two of them kiss. May and Wes wonder where things will go from there...

Given that this is the last Spider-Girl adventure we'll see in a while, I was disappointed that Tom DeFalco chose to set a good portion of it in a future that will never come to pass. The apocalyptic future felt like a pretty rushed way to get April to see the light, but given that DeFalco only had one issue, it's forgivable.
Spider-Girl: The End is a solid sendoff to the daughter of Spider-Man. Seeing her and Wes finally get romantically involved was a great note to end the series on, and DeFalco leaves us with a glimmer of hope that we haven't seen the last of May "Mayday" Parker.
A big thank you to Tom DeFalco, Pat Oliffe, Ron Frenz and the other talented artists, letterers and editors who put out one of the most consistently entertaining books on the stands. Joe Quesada and the head honchos at Marvel also deserve praise for routinely giving the book a fighting chance.
But most of all, Spider-Girl's small but extremely dedicated fan base deserve a round of applause for keeping the book going for as long as it did. Take a bow guys, you deserve it.
Read More
Newer Posts Older Posts Home