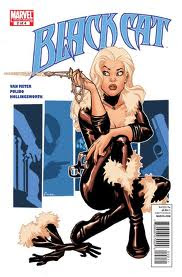 Ugh... The story continues but I'm not that interested anymore to be honest. Not that it's a bad story, but this issue didn't make me curious as to what will happen next month. Kind of dissapointed there are two issues more instead of one.

The Black Cat continues "collecting" what the kidnapper of her mom says. His associate discovers that all three items have one thing in common: They belonged to the Kravinoff family someday and that guy is maybe some kind of Kraven stalker or whatever.

Spider-Man arrives, convinced that Black Cat is robbing everyone, trying to stop her, but she avoids him.

Though at the end the cliffhanger is wierd... It seems that her mother is working with this guy or something?

Anyway. I am not impressed with this issue, but there are two issues more left. I hope that things will get better.
Read More 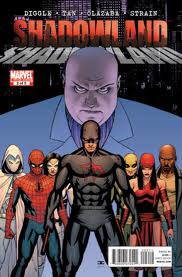 The insanity that is Matt Murdock's life continues!


Moon Knight enters the game, very stealthy, in a great way. Cage and Iron Fist are discussing the situation, while Fisk arrives telling them they have mutual interests in bringing down Daredevil.

In Shadowland, Daredevil tells the Black Tarantula that they will expand their law, not only in Hell's Kichen. He also tells him to put the word on the street that "any and all costumed heroes are invited to join".

Now... The Kingpin, through Lady Bulseye has aquir
ed the "Black Scroll" and he reads the spell in Japanese. In front of him Ghost Rider (most probably) appears in front of him and Kingpin sends him on a mission. That does not have any relation to the
latest Ghost Rider run.

Iron Fist, Cage, Misty Knight, Shang - Chi and Colleen Wing have heard Daredevil's call, and at last, from a rear window, Spider-Man appears!! In the Shadowland Dungeon, Moon Knight "captured" tries to escape to see what happens here. Ghost Rider appears, while there's a missunderstanding upstairs and a fight begins. Predictable, with so much testosterone in the room... 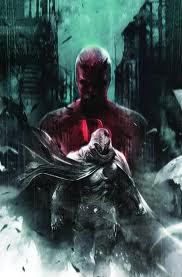 In Daredevil #509 we see Elektra and Master Izo in their own mission in Japan, Iron Fist and Cage are helping Foggy with the ninjas and Typhoid Mary offers her servises to Daredevil. 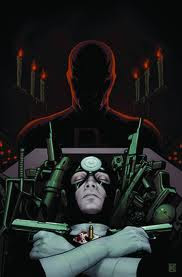 In Shadowland: Blood on the Streets #1, the Shroud investigates a murder suposedly by the hand, he and Misty 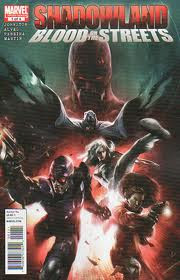 Knight have some common interest, Silver Sable kicks ass in a bar and Paladin has 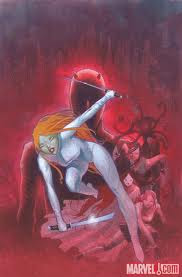 Shroud on his crosshairs.


Shadowland: Bulseye is a nive issue a little bit away from the main concept. We see Bulseye's funeral, though there's a catch, and there's also a guy who may as well be the new Bulseye.

In Shadowland: Daughters of the Shadow #1, Colleen Wing has problem with bribed cops, while Daredevil asks her to join the Nail.

Shadowland: Moon Knight #1 gives as maybe a new Moon Knight foe, an interesting to one, and some back up feature as to how Moon Knight ended up hiting his own cab to get inside Shadowland.

And finaly Shadowland: Power Man #1 gives us the new Power Man who's pissed with Luke Cage!

The main event seems interesting, the tie ins not so much so far, except the main Daredevil title, the Bulseye one shot and the Moon Knight mini, for guys like me who love the character. We all hope Spider-Man will play a more major role. And we all still waiting for the Punisher to strike...
Read More
Newer Posts Older Posts Home