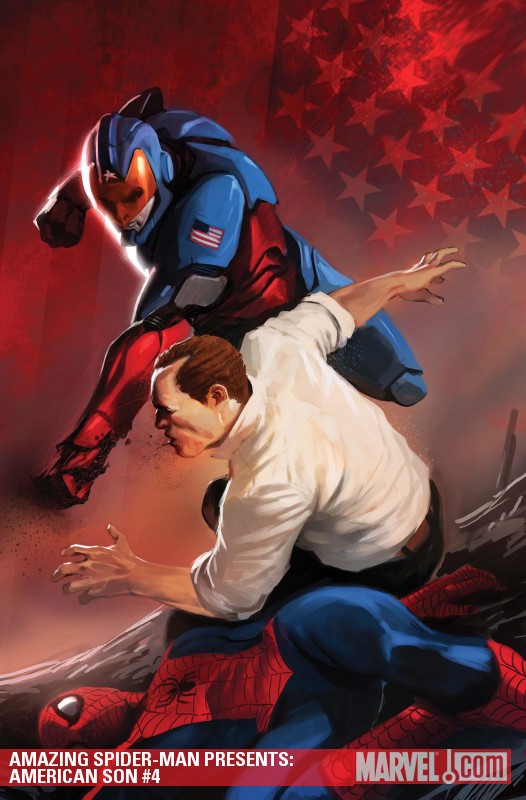 The American Son mini is finally over. Honestly, I wish I had just read everything on Wikipedia. The story was good. While the build up was interesting, it didn't end with anything life changing, unfortunately. Everything goes back to normal. Almost as if the whole event never took place.


The Story.
Well, I forgot to mention at the end of my last review, ASM Presents: American Son 3 of 4, that Spider-Man was knocked out the window by Gabriel, after he gained control of himself. So this issue starts with Spidey, falling out of the window. He lands on a car that breaks his fall, just as some cops decide to blow a hole in the  front door of the building to get in.

Unfortunately for them, this was no ordinary  front door, and it did not bow open. Instead, it just made a loud noise, injuring the cops, while alerting Gabriel that people were trying to come in. Gabriel takes off in the America  Son costume to attend to his 'visitors.'

Spider-Man, outside, is trying to help the injured folks, while Harry, now alone with Norah, tries to set her free ( She was tied to a chair). Gabriel comes outside to create some nuisance ( nothing Spidey can't really handle) See the image on right.

Gabriel later goes back to see his half brother, now alone, since Norah is gone. Harry has an ultimate showdown with Gabriel, pretty much using his brain to fight his half brother. Harry eventually wins, in the lamest possible way - He touches the American Son armor and tells it to disassemble. Obviously, the armor, which was designed for Harry, responds to him more so than it does to Gabriel. At the end of the issue, we see Gabriel in jail, receiving a package containing the American Son's helmet.

Thoughts
If anything substantial came out of this mini series, it is this:

Norah, throughout the mini, noticed that Harry was taking drugs. We later see that Norman, in jail, appears to be taking the same kinda drugs, probably to keep his mind stable. Could this mean that Harry is gonna be turning into the goblin soon again.