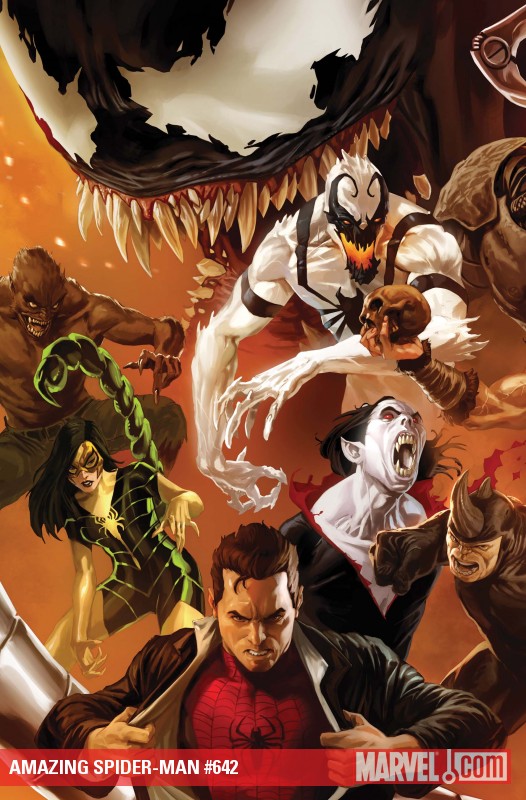 ASM 642 - the beginning of a new start for Spider-Man. For anyone who has not been following Spidey, this issue would be a good place to start since everything in Spidey's life sort of "restarts." Honestly, I think hte best part about this issue is the cover. :) Art here is really not to my liking.


The Story
It starts with Electro, surprised to see Hammerhead at a meeting he was called to. Apparently, every crook on the planet that has ever been affected by Spidey is present at the meeting.

The objective of the meeting is pretty straightforward. The villain who brings the "prize" to the guy who called the meeting (unknown at this point) gets a really good reward ( too long to state one by one).

Elsewhere, we see Peter with Betty at a camera convention. He's tryna sell off his camera to get some cash. Unfortunately, the most he can get from it is "two-fifty" ( I'm guessing thats $250). Peter tries to get a better price, stating that the lens alone cost $600. The dude doesn't budge, and Peter is about the accept his offer when Betty comes in to stop him. The whole scene is just to show how pitiful Peter Parkers life is. Betty finally says that she'll find him a better price at an online auction. Peter tells her that he can't wait any longer, so Betty gives him an advance of $50 for his date with Carlie.

He reaches home to see Michelle selling off all his clothes to cover for his rent. Peter is obviously upset as he is left with nothing but a sweater to meet Carlie in. Wearing the sweater, he runs to the coffee shop where he is supposed to meet her.

Unfortunately for him, he finds that she's been there with MJ and Harry. His two friends tell Carlie all kinds of embarrassing stories about him as Peter just sits there. Eventually, Carlie needs head off the the ladies room. At this point MJ tells Harry to give herself and Peter a minute. Peter is obviously kinda upset, and asks MJ what she's doing.


Lily appears to be giving birth, while running away from someone. Peter changes to Spider-Man just as every criminal in the world turns up. Spidey tries to fight them off for a bit until the man who sent the crooks on the mission appears - Dr Octopus. Lily gives birth on the spot, and Dr. Octopus takes the child.

Really bad art, which pretty much ruined it for me. The story here is building up into something. Dr. Ock looks like a real mess. In fact, he pretty much died a number of issues ago. Somehow, he's here, very much alive. Peter Parker's life is still a mess as well. Mary Jane - looks terrible in this issue. Seems as though Marvel is trying to detach fans from her with the bad art :p I really didn't get what she was trying to do by telling all kinds of stories about Peter to Carlie.