The Extremist puts Jameson's morality to the test and Jackpot does some stuff. 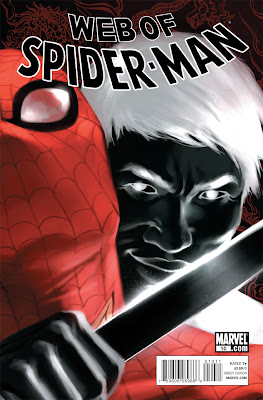 Mayor Jameson is escorted by his bodyguards to a secret bunker underneath City Hall. Unfortunately the Extremist easily enters the bunker using his phasing powers. He kills the two bodyguards and captures Jameson. 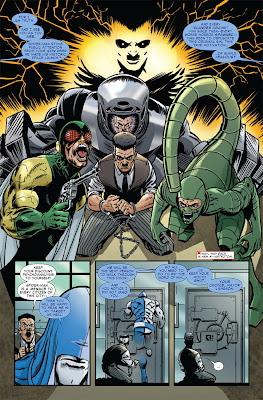 Spider-Man arrives at City Hall and gets a mixed reaction from the guards.

The Extremist leaves Jameson in a panic room with two automated guns pointed at the door. The Extremist plans to lure Spidey to the door where he will be gunned down. The Extremist does not gag Jameson; giving him the option of warning Spider-Man beforehand.

The guards are still divided on what to do with Spider-Man and begin fighting each other. The Extremist enters the room and attacks Spidey. During their battle Spidey lures the Extremist into the reporter's bullpen where he reveals to the press that the Extremist is Tyler Smithson and that he dedicated his life to "protecting" heroes when his mother was killed during the gang war between Mister Negative and the Hood. Spidey has another surprise for the Extremist when he makes him solid again using the device he used against the Vulture back in ASM #2. Spider-Man punches the Extremist's hood off revealing his scarred face. It turns out that the Extremist is not a mutant, but that he paid Doc Tramma to make him what his mother always wanted him to be.

Defeated, the Extremist brings Spidey to the panic room. After noticing a camera on the wall, Jameson decides to warn Spider-Man about the guns, although his spider-sense tipped him off anyway. The Extremist breaks free and attempts to kill Jameson. The wall guns are still firing lasers in Spidey's direction, so Spider-Man grabs a mirror to deflect them. The mirror also causes the Extremist to look at himself and read his own aura. The Extremist is devastated that his aura is the same as Jameson's. The lasers then bounce off the mirror and shoot the Extremist in the chest, putting him out of his misery.

Jackpot fights Red Dragon in the prison yard. Although she manages to get the better of him, she is soon overwhelmed by his henchmen and knocked out. Upon regaining consciousness the police inform her that Fred Myers is dead and that they do not know who ordered the hit. She interrogates one of the Red Dragon's henchmen but the henchman's costume shocks him to death before he can reveal anything. Jackpot does manage to grab a tiny camera off the corpse.

Reed Richards is able to trace the signal of the camera back to its origin and gives Jackpot an address.

It was odd that the Extremist was surprised by his grey aura. Last issue he seemed to be aware that what he did was morally wrong.

The story pretty much plays out the way you expect it to. I might have enjoyed it more if it were only a two parter. I'm glad that the Extremist was not a mutant, although now that he's dead I suppose it doesn't matter.

Sana Tekeda's great artwork was the only thing that stood out about the Jackpot story. Though I am glad Boomerang's not dead. 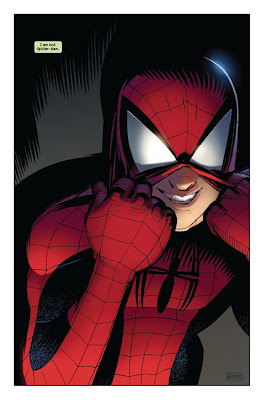 Mary Jane and the Chameleon (as Peter) ride home in a taxi from the Daily Bugle. The Chameleon observes that MJ still has feelings for Peter and starts to kiss her. MJ succumbs at first but quickly pulls herself back. Angered, she leaves the taxi cab. 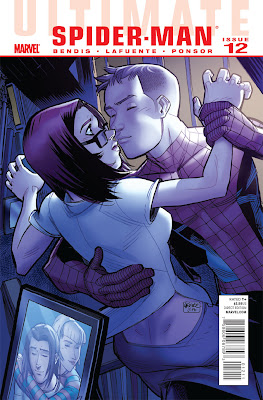 The Chameleon arrives at the Parker residence and has a hard time finding his bearings. He heads to the attic where he calls his partner and informs her of his current status. The Chameleon suspects that there is more to Peter than meets the eye and intends to discover what it is. Gwen comes up to visit him and the Chameleon tells her that MJ came on to him. Gwen becomes furious and leaves the attic.

The next morning the Chameleon heads to Midtown, where he assaults and threatens Flash Thompson. He then runs into MJ again and tries to manipulate her into revealing Peter's secret. The interaction ends with the two of them kissing, only this time Gwen is around to see it.
That night the Chameleon returns to Peter's house and Aunt May gives him a lecture on the way he treats women. The Chameleon ignores her and heads for the attic, where he breaks open Peter's chest and discovers his Spider-Man costume and webshooters.
Issue #13 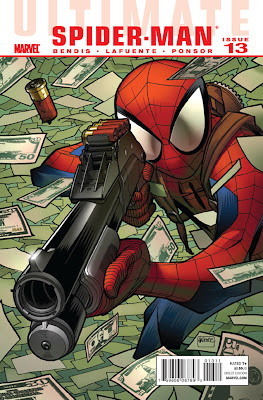 Wearing Spider-Man's costume, the Chameleon experiments with Spidey's webshooters.
Meanwhile, Peter wakes up, drugged and tied to a chair along with J. Jonah Jameson. The two of them start to talk and Jameson deduces that Peter is Spider-Man.


The Chameleon begins robbing banks as Spider-Man, using mutant growth hormone to increase his strength and agility. Deciding that he no longer needs Jameson, the Chameleon orders his partner to kill him.
The Chameleon's partner is actually his sister and she possesses the same shape shifting powers. She shoots Jameson in the head right in front of Peter.
As news of "Spider-Man's" crime spree hits the airwaves, Aunt May realizes that it cannot be Peter. She orders Bobby and Johnny to defeat the imposter and bring the real Peter home.
Thoughts
While it's always fun to see the Chameleon mess up Peter's life, this type of story has been done many times before. The Ultimate Chameleon is not as interesting as his Marvel Universe counterpart, although giving him a sister is a cool twist. The Chameleon's actions have definitely scarred the Gwen/MJ friendship which should put Peter in a difficult position.
JJ has never had a big role in the Ultimate line, but I hope he's not really dead. His death does not serve much of a purpose here, and I'm curious to see what he would do now that he seems to know Peter is Spider-Man.
Read More

Revelations and , Spdeath abound as the story of Spider-Girl draws closer to its conclusion!


Spider-Girl phones the Black Tarantula's headquarters to warn him about April's impending attack, but is too late. April easily takes out Chesbro and Arana before facing off with the Black Tarantula. Spider-Girl swings in and tries to stop April and the Black Tarantula from killing each other. With some difficulty, she manages to separate April from her target. Angered, April starts beating May but cannot bring herself to kill her. She leaves a g 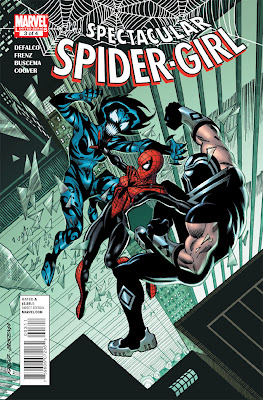 roggy May alone on a rooftop.
The Black Tarantula decides to relinquish control of New York's underworld and return to South America where he can marry Arana.


Don Silvio is frustrated that he is unable to locate Man Mountain Marko. He calls Detective Drasco, his mole inside the NYPD, and berates him when he is unable to come up with any new information. After getting off the phone with Silvio, Drasco leaves to do something he should have done years ago...


Spider-Girl changes into her civilian guise and goes for a walk. Her spider-sense soon warns her that Wild Card is following her. Quickly changing back into Spider-Girl she confronts Wild Card on a rooftop.


Meanwhile, Mary Jane finds April at home crying on the bathroom floor. She tries to console her but April knocks her aside.


The Punisher confronts Man Mountain Marko on a rooftop and starts to fight him when Marko refuses to reveal Silvio's whereabouts.


Spider-Girl and Wild Card continue their fight. Spider-Girl manages to gain the upper hand and shatters Wild Card's mask; revealing him to be... Peter Parker!


Drasco arrives at Silvio's mansion and pulls a gun on the unsuspecting Silvio, placing him under arrest. Unfortunately, Drasco is hit from behind by an energy blast by the Hobgoblin!
Issue #4
Spider-Girl helps her father through the front door of their house and lays him on a couch. Mary Jane rushes into the room and asks what happened. MJ is now sporting a black eye, courtesy of April. May and Peter are upset, but MJ defends April, stating that she is in a vulnerable emotional state. Peter then explains that he used the identity of Wild Card to scare May out of participating in the gang war. He got the Wild Card costume and weaponry from Normie Osborn. Blaming herself for lying to her parents about her role in the gang war, forcing her father into a no-win situation and April's breakdown, May wonders if her family will ever recover from the consequences of her actions.


The Hobgoblin explains to Silvio's underlings that he was the one who gave Silvio his cybernetic implants and that Silvio has been his puppet the whole time. It was the Hobgoblin who Guido discovered in the wine cellar back in issue #1. American Dream, Darkdevil, Ladyhawk, the Buzz and the Green Goblin (Phil Urich) arrive outside the house with the police who have a warrant for Silvio's arrest. Silvio steps outside and manages to take out both Darkdevil and the Buzz. Things go from bad to worse when the Hob 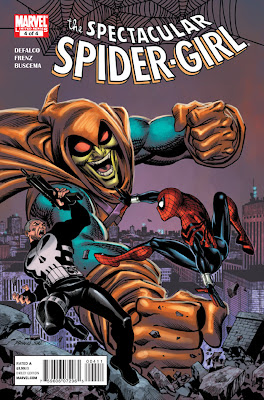 goblin joins the battle with a spiffy new glider and some heavy duty wrist gauntlets.
The Punisher has subdued Marko, who is still unwilling to reveal Silvio's location. Marko is saved by the Black Tarantula, who is willing to give the Punisher Silvio's location in exchange for sparing the lives of himself and Marko.
The Parker family are still unsure of what to do about April. Normie Osborn phones May and explains what is happening at Silvio's mansion. Although her parents aren't thrilled, they don't stop May from going to help her friends.


When Spider-Girl arrives she spots the Punisher on the roof of the mansion about to shoot the Hobgoblin. She stops him and after a brief battle, manages immobilize the Punisher by webbing him to the chimney. The Hobgoblin swoops in and takes Spider-Girl into the air. April watches the battle from afar.


The Punisher breaks free and attacks Silvio but is quickly overpowered by Silvio's cybernetic implants. The Punisher is able to unload a few rounds in Silvio's chest before Silvio snaps his neck. Both men fall to the ground, dead. Leaving Spider-Girl, the Hobgoblin grabs the other five heroes, brings them high into the air, and drops them. Spider-Girl acts fast and manages to save them but leaves herself vulnerable to the Hobgoblin. Before the Hobgoblin can kill her, he is stabbed in the back by April, who then leaves. After speaking with the authorities a battered Spider-Girl heads home, wondering if she will ever be the hero she yearns to be.
Thoughts


These past two issues have been a fun ride as Tom DeFalco attempts to tie up all the plot threads that have been running through Spider-Girl this past year. I always thought that the Hobgoblin's exit in Amazing Spider-Girl #18 was abrupt and didn't make much sense, so it was good to see him back. DeFalco writes a badass Hobgoblin, as he mops the floor with all the heroes during the final battle. This made his quick death at the hands of April all the more disappointing, but DeFalco only had so many pages to wrap everything up.
I am not a fan of the revelation of Peter as Wild Card. Trying to protect your daughter by repeatedly attacking her just doesn't seem right to me.


I am interested to see how DeFalco ends April's story in the upcoming Spider-Girl: The End one shot. Given all the death she's caused and her attack on Mary Jane, the character seems irredeemable at this point.
Read More
Newer Posts Older Posts Home