The review you've all been waiting for! 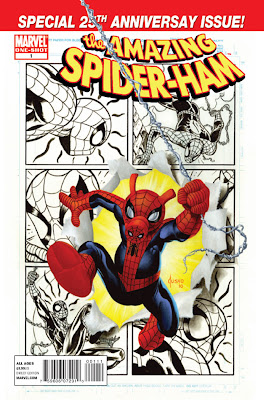 
The Swinester Six, a supervillain team comprised of Spider-Ham's greatest foes; Mysteriape, Eelectro, Green Gobbler, Sandmanatee, the Buzzard and Doctor Octopussy ('cause he's a cat, pervert) make a plan to take down Spider-Ham for good.


As Peter Porker heads off to his job at the Daily Beagle, Aunt May and Mary Crane remind him that they'll be dropping by to take him out for a special birthday lunch. Peter promises he won't be late. As he walks to work Peter reflects on the 25 years he has been Spider-Ham. 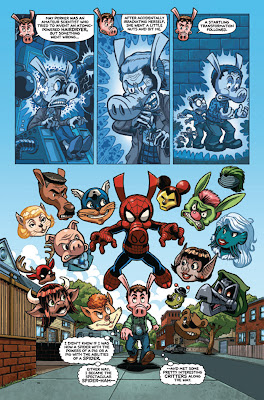 A few hours later, J. Jonah Jackal, Mary Crane and Aunt May are kidnapped outside the Daily Beagle building by the Swinester Six. Peter soon notices that his family is late and his boss is missing. After trying in vain to find them, the Buzzard appears and informs Peter that the Swinester Six is willing to trade the hostages for Spider-Ham. As the Buzzard leaves Peter quickly changes into Spider-Ham and follows him to the Six's hideout. Spider-Ham bursts in and easily takes out Mysteriape, Eelectro, Green Gobbler, Sandmanatee and the Buzzard by using their own powers against them.


Meanwhile, Doctor Octopussy is treating his hostages to a nice dinner. Aunt May is very impressed with the doctor's manners, but accidentally spills some hot tea on him. She then offers him some cookies, but accidentally hits him in the head with the plate. As she tries to help the him up, Octopussy accidentally bumps his head on the table, putting him down for the count. As Spider-Ham enters the room, J. Jonah Jackal takes credit for defeating the doctor. The police arrive and Spider-Ham flees the scene.


Crayfin used to be one of the best baseball players in the National Baywater League until an article in the Daily Beagle revealed that he was using performance enhancing drugs. Now disgraced, Crayfin wants revenge on the Daily Beagle and the one who wrote the article; Peter Porker!


Peter's daughter May (AKA the spectacular Swiney-Girl) is upset that her father refuses to teach her how to be a superhero.
As Peter arrives at the Daily Beagle, he and two of his co-workers are kidnapped by Crayfin.


J. Jeremiah Jackal phones the Porker residence and informs Mary Crane and May of Peter's kidnapping. May changes into Swiney-Girl and looks up Crayfin's address in the phone book. She soon arrives at Crayfin's hideout and the two of them engage in battle. Swiney-Girl is caught off guard by Crayfin's impressive bunting skills, and is knocked out by the bunter. Crayfin then buries her alive!


Third Story - Why Not Have Spider-Ham be a Human?


Swiney-Girl manages to claw her way back to the surface. She then returns and frees her father and his two co-workers. After the co-workers leave, Peter changes into Spider-Ham and he and his daughter go after Crayfin, who made a run for it. The underground road they chase Crayfin through eventually splits off into two ways forcing them to split up. The tunnel Swiney-Girl follows leads to the basement of the Daily Beagle where Crayfin is wreaking havoc. Swiney-Girl is able to save the Daily Beagle staff and defeat Crayfin.


Thoughts
Those looking for wholesome, family friendly entertainment will definitely get a kick out of this one-shot (Octopussy not withstanding).
As for the rest of us... well... if you can find this issue in a dollar bin, you might get a chuckle or two out of it, but it's definitely not worth $3.99. The best story in the one-shot was "Why Not Have Spider-Ham be a Human?" and it was only 4 pages long.
Read More
Newer Posts Older Posts Home