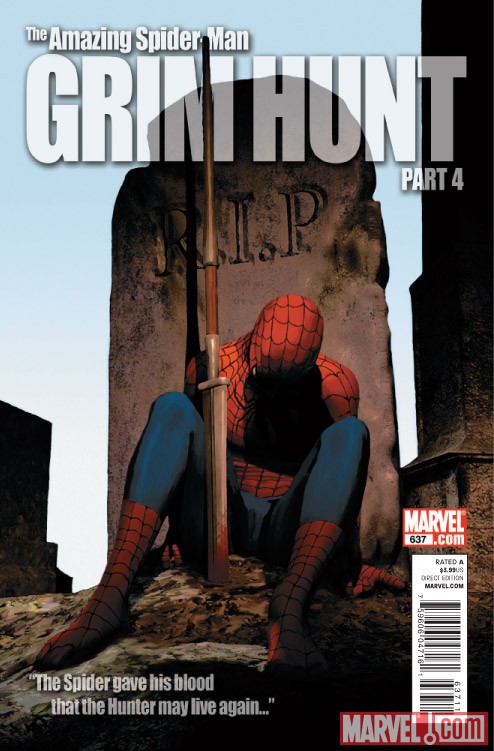 The finale for Grim Hunt hit the stores a few days back. Most people I'm sure have already searched up online elsewhere to see how it has finally ended. So here is my fair share of a late review.

The Story
It starts with the Mayor ( J.Jameson) of NY giving a speech regarding the recent events involving wild animals on the loose in the city. As he speaks, spiders begin crawling up behind him. Elsewhere, Peter is really pissed seeing his half brother's ( Kaine's ) body in the coffin. As in the previous issue, Kraven left a little note, along with Spidey's black costume, urging Spidey to hunt him.

Back at the Kraven's home, the Kraven family is advised by Kraven himself to prepare for war. With the sudden appearance of millions of Spiders all over the city, it doesn't take a genius to figure out that Spider-Man is angry. ( Apparently Spider-Man and the spiders are like the Lizard and his lizards now )

Sasha, extremely pissed that she was tricked into killing Kaine, and that her husband is also very angry at her, takes out her anger on Madam Web. She slashes Madam Web leaving her to bleed to death. She leaves Vladmir, who did not actually die in the last issue to kill the other Spider-girls.

Just then, the lights go out - obviously its Spider-Man doing things Batman style. One by one, Spidey takes out all of the Kraven family with intention to kill. He leaves Madam web in the care of Julia. The dying Madam Web tries to warn Julia that Spidey is making a mistake. Something happens while Julia is taking care of Madam Web as the panels become white. ( Implying that Madam Web passed her abilities to Julia as she passed)

Spidey hunts Sasha, and even stabs one of her eyes. He is stopped however by Anya ( the small spider-girl). Kraven eventually comes out of the dark to take on Spider-Man. A pretty cool fight scene takes place that ends with Spider-Man about to spear Kraven. Fortunately, he is stopped by Julia, now with Madam Web's powers. She shows him his future if he takes this path. I'll just post the scan here. I love the costume he uses in the future.

Spidey lets him live and walks off. Anya later takes on Julia's mantle, and obviously Julia goes on to be the new Madam Web. The Kravens move on to ' as fas as you can possibly go,' where Kraven wants to train his family. He leads them to some jungle with dinosaurs!

Here, Kraven tells Sasha how she has mocked him. He tells her that if she is able to survive in this jungle, she will be worthy to be called a Kravinoff. Outraged, she yells back at him, only to have her neck snapped by her husband. Vladmir retaliates in anger and is also killed. Aloysha, seeing what is happening decides to leave. Finally, Ana Kraven is left standing. Her father tells her to hunt her brother. The surviver will be worthy to rebuild his family name.


This second story that has been ongoing for the last couple of issues ends here as well. Kaine and Kraven fight their hearts out. Kaine finally defeats Kraven and buries him alive. However, dues to Kraven's healthy eating habits and some other really weird explanations, his body is able to survive underground for three days. Kaine eventually gets the news that Kraven was sighted alive, giving him hope that Kraven could indeed be the one to put him in the grave.

Thoughts
The whole Grim hunt has been awesome. Although I do wish that none of the characters had died, this seems to be a pretty much perfect ending. I'm still wondering how it is that Kraven and his family traveled so far that there were dinosaurs.

Julia as the new Madam Web is awesome, along with Anya taking Julia's old costume. This along with Mattie's unfortunate death helps to reduce the number of rogue Spider-people.

Finally, I am extremely happy that the future Spider-Man costume as portrayed during the JMS run is still there. Perhaps in 20 years Spidey will be running around in that costume. It is about time he changed his costume anyway. After all, even Wonder Woman has finally changed her costume.

I just saw this scan  up on a CBR forum. Enjoy.