Spidey is hired to spy on Wolverine for a hair gel company. Seriously... 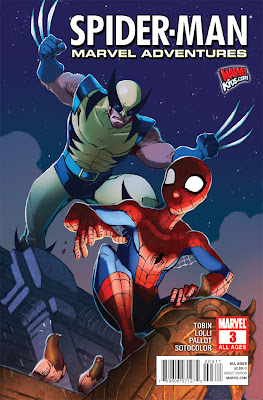 
Spider-Man and his girlfriend "Chat" are hired by the Blonde Phantom Detective Agency to spy on Wolverine for a day. A hair gel company wants to use Wolverine in their ads for a gel called "Rebellious," but the company wants to make sure that Wolvie does not involve himself in any illegal activity. Enticed by a potential five thousand dollar payday, Spidey accepts the job. 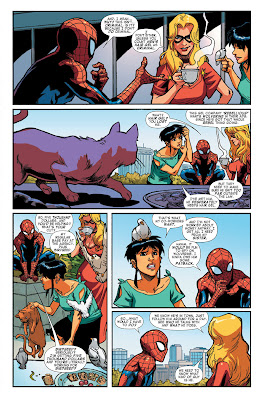 At Midtown the next day, Carter Torino informs Peter and Sophia that he is starting a Spider-Man Appreciation Society and asks them if they could help organize it. Both decline to commit due to their superhero duties.


After school Spidey and Chat start trailing Wolverine. After following him around for 45 minutes they witness Wolverine intimidate some Torino thugs who were giving him a hard time.


Twenty minutes later Wolverine lures Spider-Man into an alley and ambushes him. He informs Spidey that he knew someone was following him. The two are then attacked by the same thugs Wolvie intimidated earlier. The two make quick work of them and Wolverine leaves Spider-Man to clean up the mess. After Wolverine leaves more Torino thugs show up with Bullseye in their company. Spidey attempts to escape but Bullseye manages to stun him with a precise shot to the head. The thugs beat on Spider-Man until Bullseye stuns them as well. Bullseye tells Spidey that he is still toying with him and that next time he'll be using lethal force.
Bullseye escapes just as Chat, Wolverine and the Blonde Phantom arrive. Wolverine tells the Blonde Phantom that he will only consider the gel company's proposal if she'll join him on a date to which she happily accepts. Spidey decides not to tell Chat about Bullseye...


If you thought this would give you your Spider-Man/Wolverine fix before the next issue of Astonishing came out you may have felt short changed by this issue. All the two characters do together is take down some nameless thugs; not terribly exciting stuff.


The most interesting development was Bullseye finally revealing himself. A confrontation between Spider-Man and Bullseye has been building for a while now, and it looks like they will finally throw down next issue. It's impressive that Paul Tobin is able to make Bullseye come off as a deadly threat even in a kids book.


Carter wanting to start a Spider-Man Appreciation Society was a little odd, since Spider-Man's only fan has traditionally been Flash Thompson. Does he even exist in the Marvel Adventures universe?
Read More
Newer Posts Older Posts Home