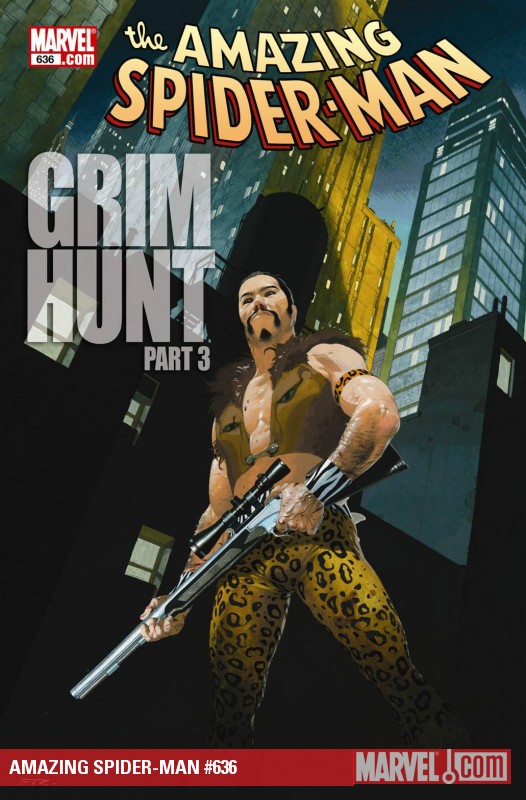 Grim Hunt part 3 is revealed in Amazing Spider-Man 636. In case you are unaware of what has been happening, I suggest you go read some previous reviews, because this is getting to be a really good story.


The opening scene shows two patrol officers, complaining about the large amount of dead spiders lying around the floor. Elsewehre, Kraven the hunter is being cleaned up by Sasha, after just rising from the grave. As she cleans her once dead husband, the officers continue about that duties until they are mauled to death by a pack of lions that appear out of no where.

The other Spider-girls, are all caught and imprisoned, blaming Madam Web for what has happened, while Madam Web seems to be slightly hopeful.  Kraven starts talking eventually, asking for his family whom he does not recognize at first.

He eventually asks about Vladmir, his son who became a monster a few issues ago. He finds Vladmir in the prison where Madam Web is held, about to kill Arana. Kraven stops his son in time and kills him. He then turns to his wife and tells her that this is not right.

Elsewhere in the city, animals begin to appear, bold, and creating a nuisance. Mary Jane is shown in a scene, seeming to recognize what is happening. Back at the hideout, Kraven is growing furious and turns to attack his daughter. In defense, Ana Kraven stabs her father in the chest. Kraven, for some reason is not badly injured. He tells his daughter not to apologize. When Sasha comes to his aid, he looks at her with fury in his eyes. Kraven figures out immediately that he does not have a real life and that another (Kaine) had been sacrificed instead of Peter. Kraven denies his wife's appeal to fix the problem, implying that he will fix it himself.

Elsewhere, Peter rises from the grave remembering what had happened. He remembers Kaine knocking him out and taking his Spider costume. Peter runs franticly searching for something. He finally finds Kaine's body in a coffin with a note from Kraven telling him to hunt. There is also Peter's old black Spider-Man costume next to the body.

This story also starts exactly where the second story from ASM 635 ended. Kaine had just been slashed in his throat by Kraven. To fix himself up, Kaine uses his burning touch powers to burn his wound close.

When he gets up, Kraven is no longer there. He sees Kraven's good friend, Mwanga, a good hunter, who advises Kaine to flee while he can.
Kaine disobeys and later finds Kraven at a graveyard, standing over s tombstone with Kanie's name on it.

Kraven tells Kaine that the knife his throat was slit with was poisoned, explaining his extra pain. A group of lions then start attacking Kaine. Kaine is able to fight and kill them all, he then makes a run for Kraven to chase him. Kraven follows Kaine into a house only to find his good friend Mwanga killed. This absolutely angers Kraven. It is at this point that Kraven notices the similarity between Kaine and Spider-Man.

The final scene shows the two jumping in mid-air, about to clash in battle.

Thoughts
As mentioned, the grim hunt story is starting to get really good. Kraven is obviously not happy about being raised from the dead, to to a false life at least. Madam Web is smiling seeing the look on Sasha's face, and Peter is being challenged to hunt Kraven, with his black suit. Can't wait for the next part of this series.
Read More
Newer Posts Older Posts Home