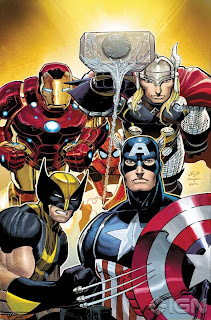 After Siege, there is no SHIELD, no HAMMER, only the Avengers. Steve Rogers is the top cop and choose the persons he thought needed for the Avengers. Everyone still is wondering why Wolverine and Spider-Man are on both teams though. Plus, the “big three” are reunited, though obviously Bucky is still Captain America.

The Story
I haven’t seen the Next Avengers movie, so I go with what I’ll go with only what is given in the book, like I don’t know the characters.
Immortus shouts some threats, when he is obliterated by a blast. Seems like some young characters are responsible: One of them has (maybe) the photon shield of Cap, one looks like Iron Man, one like Hawkeye, and generally they look like some young Avengers.
We see now that Steve Rogers asks several characters to be Avengers: War Machine, Black Widow, Justice, Spider-Man, Hulkling, Wolverine, Captain America, Thor, Tigra, Patriot, Iron Man, Luke Cage, Iron Fist, Jessica Jones, Mockingbird, Doctor Strange, Hawkeye, Speed, Stature, Wiccan, Vision, Spider-Woman, Hawkeye (Clint), Wasp, Beast and Wonder Man.
Wonder Man now says to Steve that the Avengers should not be formed because they were the cause for all the troubles lately. Steve later gathers the main Avengers team (Thor, Hawkeye, Spider-Man, Wolverine, Captain America, Spider-Woman, Iron Man). Iron Man tells Steve that lately they do not agree so often so it’s not a good idea but Steve tells him that he will not be in charge of the team, Maria Hill will be.
Then Kang enters the scene and goes on a fight with Thor. Kang shows a machine that Iron Man has not constructed yet, but he thought it once, a dark matter accelerator. Kang informs them that their children, who live in a world, ruined and reinvented by Ultron, are destroying the time stream. Ultron destroyed the world and the Avengers. Their children grew up in this world and destroyed Ultron and took over his empire. Kang is going to be destroyed by this, so he asks the Avengers’ help.
The Avengers wonder what they are going to do, and they decide they need a time machine and Wolverine says that he knows someone. Kang returns where he came from and informs to someone the situation, someone who seems to commands him. It’s Hulk, but obviously from some other timeline, looking like Maestro. 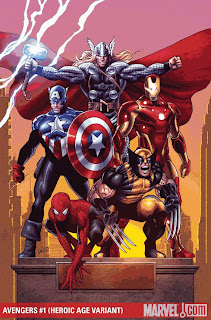 Thoughts
Ok let me say this: Kang once send a Spider-Man robot back in time to defeat the Avengers. I will only asks this, if Kang is from the future, why doesn’t he read a book and see how things turn out? Yes I find Kang silly, and time travel sickens me, when used only for the sake of it. In this issue Kang is not bothering me, though I have a feeling he will. But the first issue seems very well written, and to be exact, it seems like Bendis has a lot of fun writing this. I am a big fun a JRjr, but this is not his best work ever, there are some infamous panels, like the one with Spider-Woman that are not good. I don’t know how subjective I can be for his art though; otherwise it’s as good as we know it, not exceptional. Generally an interesting issue, let’s see what happens next.

The Extremist turns against Spidey as JJ unveils his spider-debt clock! 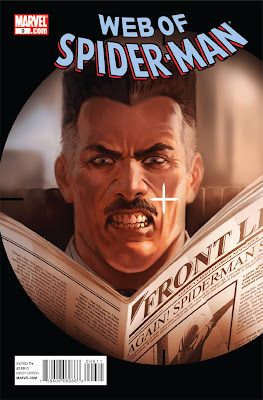 The Story - The Extremist Part 2


Many years ago, Mrs. Smitherson attempts to get her son Tyler enrolled in Professor Xavier's school for the gifted. Xavier declines to take him, citing that there is nothing extraordinary about Tyler (ouch). Smitherson leaves in a huff, still convinced that Tyler is special.
Back in the present, Peter is able to duck the Extremist's blast thanks to his spider-sense. As Michelle leaves the room, the Extremist reads Peter's aura, which is apparently "venal and weak" (again, ouch). Michelle returns with her shotgun and blasts the Extremist out the window, and he nearly lands on Flash. Peter changes into Spider-Man and attempts to fight the Extremist but his punches just phase through him. The Extremist notices that Spidey's aura is the same as Peter's and is disgusted. Michelle arrives outside and fires on the Extremist again but the bullets pass through him. The Extremist reads Michelle's aura and condemns her for abandoning her career as a public defender once she found out that "nobility was its own reward." He then reads Flash's aura and comments on 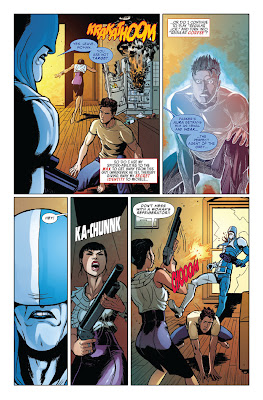 how Flash first used his aggression to bully before finding a positive channel for it on the battlefield. The Extremist takes both Flash and Michelle into the air, drops them and then disappears. Spidey is able to save them both with quick use of his webbing.
Spider-Man is able to make contact with Cyclops at Avengers Tower. As soon as Spidey finishes describing the Extremist's powers, Cyclops realizes that they are the same set of powers Smitherson claimed her son Tyler had (good memory). Cyclops gives Spidey information on Tyler's current whereabouts.


At his hideout, the Extremist realizes that the idea of Spider-Man the hero is more important than the reality of Spider-Man the flawed individual. He decides that in order to preserve Spider-Man's status as a hero, he must kill him. After watching Mayor Jameson announce the construction of a spider-debt clock in Times Square, the Extremist sees an opportunity for a trap.


Later, Spider-Man arrives at the Extremist's hideout only to find that it has been abandoned. All he finds is a picture of City Hall...


At City Hall, Jameson is overseeing the construction of his spider-debt clock when his security team informs him that the Extremist is in the building.


Fred Myers (AKA Boomerang) is on trial for killing Scott Ehret (happened here). When Sara Ehret (AKA Jackpot) takes the stand, her refusal to reveal the location of her daughter and put her on the stand allows Myers' lawyer to cast doubt on his guilt.


Afterward, Sara's lawyer informs her that his boss is putting together a case against an organized crime group called the Eastern Wind. Myers worked with them and is willing to name names in exchange for witness protection. Unwilling to let Myers get off that easily, Sara vows to find someone else who can testify against the Eastern Wind.
Later that night, Jackpot manages to capture Shocker, who reveals that the Eastern Wind has made arrangements for Myers' death. She abandons Shocker and heads for Rykers to save Myers. She may be too late, as a villain called Black Dragon (formerly White Dragon) is already on the scene.


Like last issue, Fred Van Lente brings a lot of fun ideas to the table. It was fun seeing the Extremist read the auras of Spidey's supporting cast. He renders some interesting judgements upon them, especially Michelle. Van Lente fleshes out her character here as he did in Amazing #626, making her far more interesting and likable. It also was great seeing her break out her shotgun and attempt to take out the Extremist. One of the things Brand New Day has done well for the past few years is give Peter a supporting cast of strong, diverse, capable women, whose actions can be as heroic as those of Spidey himself.


Jonah's spider-debt clock is a great idea. In the current economy, this may be his most effective ploy against Spider-Man since he became Mayor.


The Extremist himself, sadly, isn't all that interesting. His origin is pretty lame (another mutant character???) and we have seen several of these morally black and white characters before.


Apparently a lame miniseries wasn't enough, as we get yet another boring Jackpot story for our second feature. She basically grapples with the justice/revenge moral dilemma that every superhero has grappled with and reaches the same conclusion. I know Marvel wants to bolster its female readership, but if they keep giving us lame stories like this, they won't get very far. I hope we haven't seen the last of Boomerang. He is at best, a C-list villain, but even he doesn't deserve an off panel death at the hands of another obscure supervillain. On a positive note, Sana Takeda's artwork looks gorgeous.
Van Lente delivers a fun, but disposable main feature, while the second story once again fails to impress. I'm not sure Web #9 is worth the cover price, but if you can find it in a bargain bin, it's definitely worth a look.
Read More
Newer Posts Older Posts Home