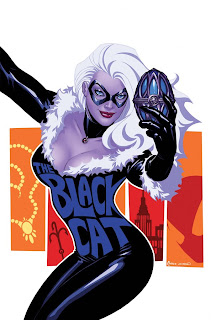 Everyone loves the black Cat, so let’s see if this mini-series starring her is worth it. Written by Jen Van Meter, with art by Javier Pulido, the first (out of four) issue seems enjoyable.

Nothing really complex. The Black Cat stoles some rings, though Spider-Man confronts her. They have “masks on” sex and Spidey tells her he will return the rings. Though unaware to him, the Black Cat kept the most valuable one.
Anastasia Kravinoff enters the story in a subplot that begins “several years ago”. Back in the present, someone is trying to frame the Black Cat for stealing some Russian artifacts. The Cat is innocent, but her associates want to clear this up for the better of everyone involved.
The Cat has set her trap and is ready to stop the burglar who frames her, when Spider-Man stops her, thinking that she is not innocent. The Cat is pissed and tells him that that thing they had is over.
Later, she is trying to learn some info from one of her associates, though she discovers he is killed. The phone rings and it’s the one that framed her.

I didn’t expect from this to be the best thing after Watchmen, so I found it interesting. A good simple story with the Black Cat is always enjoyable, and it left me waiting for the next issue. The art is a little cartoony for my tastes, but it fits well with the story I think.
On a side note, the Grim Hunt Prologue is amazing!

Before I start this, I have to say that I'm continually impressed by the quality of Spider-Man stories being released recently. I'll jump straight to the point.

The Story.
It all starts with a bloody Harry Osborn, still alive despite being shot. It remains a mystery why he was not shot in the head, but he was apparently shot in the shoulder. Anyway, as Gabriel Stacy is standing in the shop with the gun in his hand, the American Son appears and and stops Gabriel, who flees the building. Harry is then taken to the hospital by the American Son.

From some short conversation between the American Son and Gabriel, it is implied that they knew one another. At the hospital however, the American Son states that he did not see the shooter. With Harry shot, every paper in NY is dying for a story. Norah Winters disguises as a nurse to get alone with Harry in the hospital.

Seeing Norah there, knowing fully well her intentions, Harry takes her to see his father in prison. Up to this point, Harry has told the press and everyone else that he is unable to remember who shot him. Anyway, he goes to his father to find answers about Gabriel Stacy.

At the prison, Norman behaving extremely insane does not help to give Harry any answers, apart from admitting that Gabriel is indeed his son. While tagging along with Harry, Norah notices that the medicine Harry has been taken is dated from before his gun shot, implying that the medicine is not to help him recover.

In a different scene, Gabriel is seen shouting at an empty American Son suit, complaining that he was not allowed to kill Harry. The scene ends with Norah showing Ben Urich her story, with Harry Osborn beside her as the source for her story about the other Osborn son.


Thoughts
As soon as I finished reading this issue, my mind immediately started wondering who the American Son is and what connection he has to Gabriel.

We know that the American Son costume can only be worn by someone with Osborn blood. Up to this point there is only Norman, Harry, Gabriel and Gabriel's sister (Sarah) who can wield the costume. The last time Sarah was seen, she was pretty much a good person. It's unlikely she would be working with her brother.

Gabriel seems to have a mental problem as well, talking to an empty costume. Could it be that there is a Norman Osborn clone running around the city? Or a Gabriel Stacy clone? One good, one bad? Or could Sarah be using the costume?
Read More
Newer Posts Older Posts Home