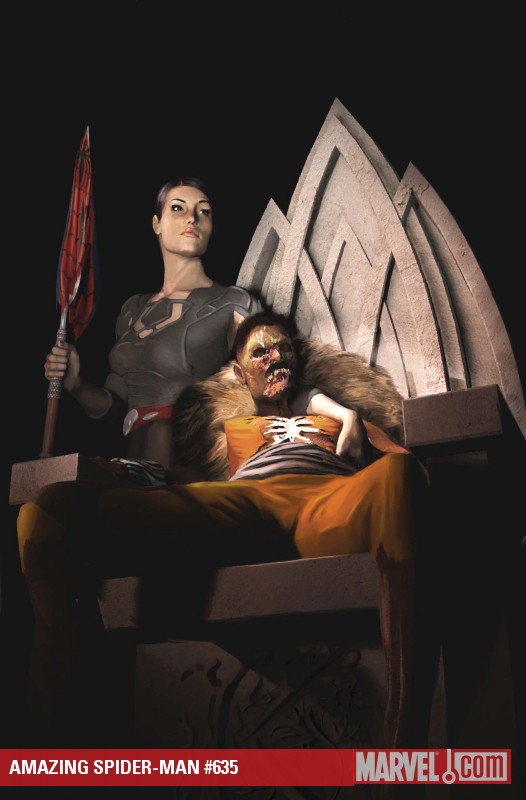 This issue was absolutely amazing. The story line near perfect. The Grim Hunt is turning out to be much better than expected - to me at least.

The Story
It starts with the Kravens  gearing up and getting ready for the rest of the hunt. Vladmir, Kraven's son who has been resurrected into some kind of beast at the cost of Mattie's life ( see Amazing Spider-Man 634 ) seems to be slightly sane in that he understands what his family says and isn't running around like a wild animal.

Meanwhile, Michelle returns to her apartment which was filled with blood stains in the last issue. Michelle is surprised to see the place so tidy. Obviously Kaine cleaned up the mess he made in the apartment.

The scene jumps to Anya Corazon - Spider-girl ( or Arana), who is being chased by the beastly Vladmir. Spider-Man jumps in the scene to help her fight off Valdmir. Spidey, still dizzy from his swine flu and etc, finds himself unable to protect himself.

Fortunately Kaine comes to the rescue, dressed as Peter Parker. Kaine pretty much shaved his long beard and all. Together, the group of Spider people fight off the Kravens for a while. Unfortunately for them, it doesn't turn out so well. Arana and Arachne get caught and taken away. Kaine tries to talk some sense into Spidey telling him not to go after them and save himself.

Peter doesn't listen and walks off. Ezekiel then appears and tells Spidey that he needs back-up, namely Venom and Anti-Venom. Meanwhile Kaine still watches from a distance.  Spider-Man follows Ezekiel through some misty place and comes out of the fog to meet all his greatest enemies at once.

Apparently Ezekiel was not Ezekiel at all, but was in fact, the Chameleon. With no energy to fight, Spider-Man makes a run for it. He keeps running until he falls into a pit.

As the Kravens chase their prey, a fully energized Spider-Man comes out of the sky and starts fighting them off. Spidey seems to have the upper hand, until he gets shot. Things go downhill from there, and he eventually gets killed and sacrificed. In the final scene, Kraven rises from the grave.


As if nobody can already figure out what just happened in the first story, they make it even clearer in the second story - featuring Kaine. The story continues from the second story in ASM 634. Kaine has been hired to kill Kraven. Throughout most of this story, Kaine is contemplating if he should take the job. He now stays in Chicago with an old lady and is running out on cash.

One night, while starting a fight in a bar, Kaine gets a vision that is not explained in the comic. Well, it is briefly suggested that in his vision Kraven kills him. Kaine returns home to find the old lady dead. He heads off the Kraven's place to finish the job.

While there, Kraven offers Kaine more money to stop what he was hired to do. In the last issue, Kraven decided that he was no longer going to be a puppet, killing for money. He tries to explain to Kaine that killing with no purpose is pointless. He tries to relate to Kaine saying that they are like brothers.

Upon saying this, Kravens face changes. Kaine takes the opportunity and tries to kill Kraven, but is only met with a counter-attack.


Lets think about this logically. The book is called - the Amazing Spider-Man. So Spidey can't have died there. Obviously Kaine, who has now shaved and was last seen spying on Peter, changed into a Spidey suit and decided to follow his brother.

The real Spidey is still in that pit he fell into and probably unconscious. Also, in a short conversation Kaine had with Madam Web before he died, he mentioned that he was not worthy to live. At first Madam Web does not understand, but it is implied that she knew what had happened later.

The second story further confirms this as Kaine, once long ago, had a vision that he would be killed by Kraven the Hunter. Unlike with the case of Mattie Franklin, this death of Kaine is much more honorable, and easier to accept. Kaine has pretty much been a crook his whole life. The best way for him to die would be by doing something good. Unfortunately he had to die quite a brutal death. So long to one of my favorite characters. Overall, a very very good issue.
Read More

So, this is the reboot of the New Avengers. It's really annoying how they have so many avengers. Anyhow, keep in mind that I have not read Avengers # 1 yet, and am just proceeding to review this issue hoping it is not related.


It all starts with Dr Strange visiting Daimon Hellstorm - another mystical dude. Dr Strange had come to help Daimon with a problem he had. It turns out that Daimon was not himself. Instead, he was possessed, by a demon of some sort I presume. Anyhow, the scene ends with Strange trying to fight him off.

The next scene involves the Avengers. It starts with an argument, that probably started in the Avengers #1. Anyhow, Luke Cage is pretty pissed that he now has to take orders from Capt America, who represents the government now. I really don't see the big problem though. Luke probably wanted to have his own freedom to do things.

To stop the arguing, Tony Stark appears and asks Luke if he still wants to be an Avenger. Obviously. Luke answers yes. Tony then asks him for a dollar. Essentially, Luke buys the Avengers Mansion for a dollar and is given the freedom to start they're own Avengers. He is given to freedom to choose anyone he wants on the team, save Iron Man, Thor, and Capt America.

Elsewhere, Dr Voodoo is trying to meditate and talk with his brother - Jericho, a ghost, at the same time. They are interrupted by Strange and Daimon, both possessed and looking for Dr Voodoo's eye of Agamotto. The events that took place are not certain, but Jericho kind of dies, and Dr Voodoo is last seen fighting his enemies.

Back at the Avengers Mansion, Luke and gang open the door to Victoria Hand, former secretary to Norman Osborn, who has a gun to Luke's baby. She states that she has a letter for them. The letter is from Captain America, recommending Victoria, and asking Luke to give her a second chance. After lots of fighting and arguing, Luke eventually agrees, seeing that Victoria is not a bad guy.

Ben Grimm aka the Thing, is later seen at the mansion, along with Spidey and some other new recruits. Ben is invited to join them and agrees to do so. Just then, the eye of Agamotto appears in Luke's hand. Dr Strange and Daimon appear shortly after stating that Voodoo is dead. Strange also calls himself the ruler of the new dimension, with Luke's help. The final scene looks a little like this.

Thoughts
This seems to be a pretty decent first issue. I like the way Captain America allowed Luke to start his own Avengers. The Voodoo story doesn't really seem too appealing to me. Seems a little like the Titans from the DCU. In the Titans, there are always demonic bad guys because Raven is kind of a spiritual being. The stories get quite boring there, which is why I no longer read them. I hope the New Avengers don't follow in those footsteps. Overall, a very good concept. I'm looking forward to more.