"Man, if this ain't all a bad dream I'm headed for a padded cell." Spider-Man 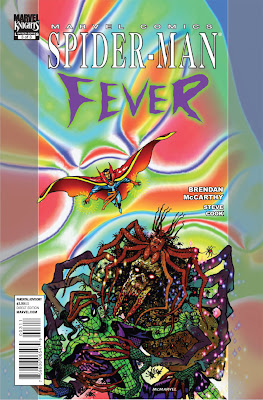 
Spider-Man follows the Sorror-Fly (AKA Crawley) through the abandoned Termite City.
Meanwhile, King Korozon grows impatient waiting for his meal. The Arachnix then notice a comet in the distance (really the wand Doctor Strange through for the two dogs last issue). Funnelweb, the Arachnix fortune teller, believes it brings destruction.
Doctor Strange is having trouble locating Spider-Man until the wand crosses his path and shows him the way.
The Sorror-Fly leads S 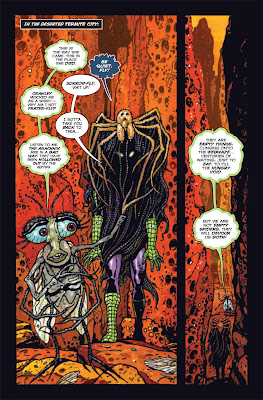 pider-Man to the corpse of the Mother. He explains that the Mother was forced to mate with King Korozon. Afterward, the King did not allow the Mother to eat him, as insect protocol demands. The Arachnix attacked her and she barely escaped into the insect dimension. Sadly, she was then attacked by wasps. She stayed alive long enough to lay her eggs, which were all eaten save one. Driddel took the last egg and hid it in the human world where it hatched the spider that bit Peter Parker. The spider, currently resting atop Spidey's head, starts telling him that they are never going back to the human world and that together they can rule over the Arachnix. The spider is then impaled by the flying wand. Termite City begins to crumble, burying Spider-Man alive.
Luckily, the two dogs had been following the wand and dig Spidey out of the rubble. Doctor Strange arrives and cures Spidey of his astral poisoning and turns Crawley back into his human form. They give Spider-Man a poison filled replica of the Sorror-Fly and send him to the Arachnix.


Spidey feeds the fake Sorror-Fly to the Arachnix and the poison works fast. As the Arachnix stumble in confusion Strange and Crawley cut the webwaze with Spider-Man still on it. While falling into the abyss Korozon attacks Spider-Man, and they land on a strand of webwaze. Spidey is able to break Korozon open with one punch and throw him into the abyss. Spidey is then attacked by another spider-demon, but is rescued by Ningirril. Doctor Strange then pulls the two of them back up.


With the Arachnix defeated, Spidey and Doc Strange bid farewell to their new friends. Strange erases Spidey's memories of these events and returns his soul to his body. As he leaves the Sanctum Sanctorum, Spidey points out that Strange's hand position when he makes his spells resembles his when he makes his webbing. Strange.
Thoughts
This was the most straight forward issue of Spider-Man: Fever. If you found the second issue hard to follow, this one explains everything to you clearly. The crazy, vivid images are also scaled back, with the action taking centre stage.


This was a very enjoyable conclusion to what has been a fun and unique series. While the first half of the issue drags a bit, the story really gains momentum in the second half when Spider-Man battles the Arachnix. While not as psychedelic as the previous issues, Brendan McCarthy's artwork looks great.
I would highly recommend Spider-Man: Fever to open minded Spidey fans looking for something different. The story is pure silver age fun, and if great artwork is all you need to enjoy a comic, this series is definitely for you.
Read More
Newer Posts Older Posts Home