Spidey and Shang Chi vs. Ninjas!!! 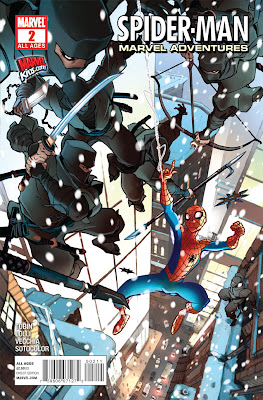 
Walking home from the grocery store, Peter Parker stops to admire a young woman's pug dog named Attila. Suddenly, some thugs on motorized scooters swoop in and snatch the dog for some reason. Changing into Spider-Man, Peter is able to make quick work of the thugs and rescue Attila. Unfortunately, he cannot relocate his owner.
Twenty minutes later, Peter meets Sophia Sanduval (his girlfriend) in a park. Sophia is a mutant who is able to communicate with animals. In addition to being lame, her powers prove unhelpful, as Attila cannot identify his owner in a way humans could understand.
In his civilian guise, Bullseye tracks down Carter Torino, a decent guy whose grandfather happens to be the head of the Torino crime family. Bullseye wants Carter to convince his grandfather to raise the bounty on Spider-Man's head. Carter refuses to help him, claiming that he supports Spider-Man. Bullseye tells Carter that after Spider-Man, he is coming for him next.
At school the next day, Peter (who has brought Attila with him) and Sophia discuss potential new superhero identities for himself, as Spider-Man gets so much bad press. Unbeknownst to them, a supervillain called Midnight enters the school through the roof with a group of ninjas. Once inside, two of the ninjas disguise themselves as janitors.


Peter gives Shang Chi, who is at Midtown give a martial arts demonstration, directions to the gymnasium. Peter is then called to the Principal's office. The principal introduces Peter to Carter Torino and asks him to give Carter a tour of the school. During the tour Peter introduces Carter to Sophia and Gwen Stacy. Gwen quickly takes a liking to Carter.


The four teens plus Attila then head to Shang Chi's martial arts demonstration. During the demo Shang Chi is attacked by Midnight and his group of ninjas. Thanks to a distraction by Sophia, Peter is able to change into Spider-Man and assist the martial arts master. Together they take out the ninjas and defeat Midnight. Shang Chi then takes Attila, whose owner is a friend of his.
Thoughts
With the origin recapped on the first page and an introduction to the supporting cast; this was the introductory issue I was expecting from issue #1. What makes this book interesting is that it is a completely different Spider-Man experience from the other titles on the stands. It has a unique supporting cast; Sophia is likable as Peter's girlfriend and Carter's mob family gives him interesting baggage. Spidey also fights baddies that he normally does not go up against in other books. Prior to reading this issue, I had no idea who Midnight was, now I do. Better yet, young Marvel fans who read this now know who Midnight is, thus giving them the opportunity to outdork their older counterparts. If that does not justify this book's existence, I don't know what does.
Read More
Newer Posts Older Posts Home