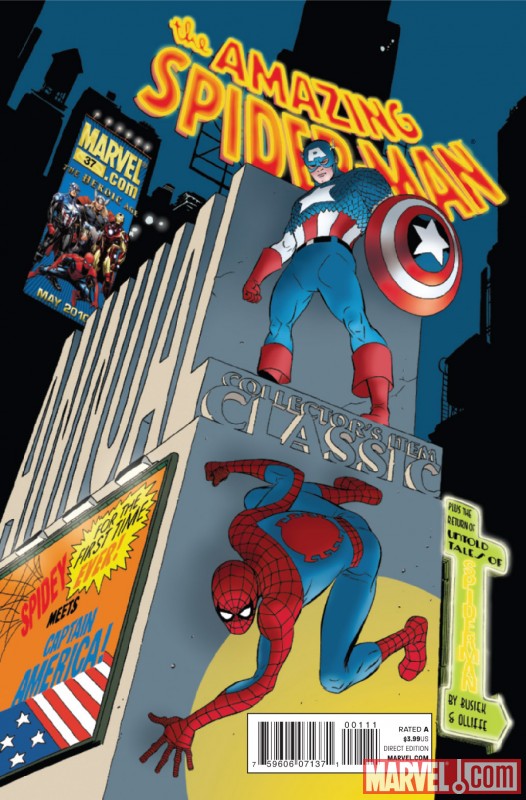 In an attempt to launch the Heroic Age, the Amazing Spider-Man annual features a story that takes place hundreds of issues ago, which translates to be five years ago. The issue features the first meeting between Captain America and Spider-Man.


The story starts with Spidey, trying to stop Sandman from robbing a bank. Spidey doesn't get much help as most of the crowd think that he is fighting Sandman so he himself can rob the bank. At one point Spider-Man is being strangled as Sandman transforms into granite and suffocates him. At that moment, Capt. America appears, knocking Sandman out with his Shield.

The crowd goes wild seeing Captain America as he is the superhero icon. Even Spider-Man himself cant believe he's actually talking with Capt. Anyway, Capt understands that Spidey has some misunderstanding with the police. He helps Spider-Man escape and proceeds to lock Sandman.

As Sandman is taken into captivity, four people appear teleported into the scene. They are supposed to be the worlds greatest theorists and thinkers, forming a small group of rogue scholars. They explain to Captain America that they have predicted that Sandman is going to kill 27% of the world's population in the next few hours. This can only be avoided if Flint Marko is killed.

Obviously Capt does not allow, creating a bit of a fight scene. Spider-Man, not far away sees what is happening. He grabs Sandman, who is in captivity, and makes a run for it to save his life. Together, Spidey and Capt fight the rogue scholars, while trying to protect Sandman. One of the scholars, a woman, has the ability to mutate anything she fires at. Intending to create an army of mutated pigeons to aid them, she fires at an aviary. Captain America manages to deflect the blast with his shield, which unfortunately lands on Sandman.

Sandman begins to mutate, increasing in power by the second. His restraining collar begins to weaken as he becomes more powerful. With so much power, Sandman decides that he'll kill a third of the population once he is free. ( How ironic). Just when things seem to get really bad, Spider-Man concludes that the collar would be able to control Sandman's increasing power levels if it had enough power itself. With that, Tesla, one of the four rogues scholars, blasts a beam of energy, or electricity, at the collar.

Just like that, the problem is solved and Sandman is back in captivity.  He is also powerless for at least 24 hours, thus taking care of the problem these scholars were concerned about in the first place. At this point, the leader of the scholars states that he had planned it all along.

Captain America, slightly annoyed asks if there was no easier way to prevent this. The scientist states that there were 17 easier ways, none of which would be as rewarding as this. The woman in the group is extremely impressed and agrees to go out for dinner with him.

At the end of the day, this whole adventure was just so that this man could impress a woman. Spidey and Capt America chat a little the next day about changing the publics view toward Spider-Man. Spidey decides not to endanger Capt's reputation by being affiliated with Spider-Man. At the end of the story, Capt concludes to himself that the only way to help heroes like Spider-Man is to recruit them to the Avengers.

The second story
As if the first story is not lame enough already, the second one only gets wordst as some retarded looking villain called the Top appears. At the end of the story he gets a better name: Whirlwind. This story also features a character named Stan Lee. It tells of how Stan Lee decided to write a Spider-Man comic. ( Not the real story obviously )

Thoughts
In my honest opinion, I could really do without these two stories. There is no great story line at all. Furthermore, I have never been a big fan of Captain America. It really amuses me how it is that he is so powerful and highly respected. Anyway, welcome to the Heroic Age
Read More
Newer Posts Older Posts Home