What has happened to the Thing? Who is Mystery? Will the answers be revealed here, or will Bendis string this along for another eight issues? Do not count on the former. 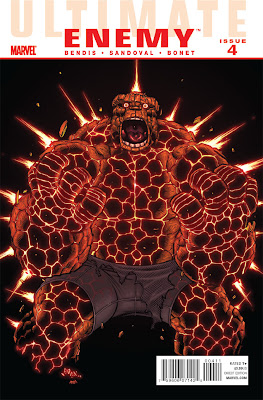 
We rejoin our heroes at the battle on the Parker's front lawn where "Mystery" (AKA purple alien guy) has been put down for the count. Sadly, the Thing is falling apart and there is nothing his friends can do to help him. He keeps glowing and falling apart until he passes out.


At the Triskelion, Carol Danvers attempts to interrogate Mystery but has no success. She calls in Nick Fury, who unlike her, has no moral objections to torture.


In another part of the Triskelion, Sue Storm sits next to a ravaged Ben Grimm who is on life support. She apologizes for the way she treated him earlier and declares that she will find a way to earn his love. Ben then starts convulsing.


Fury fails to get any info out of Mystery with his "Ass Kick" bat. Hawkeye, a more skilled torturer, comes in and tells Fury to go for a walk.


Peter Parker realizes that, until he finds out who attacked him and why, he and his family are in danger. He tells Aunt May to get a hotel in New Jersey while he finds out who was behind the attack. As Spider-Man swings across town, Spider-Woman follows him.


After going on a rant about the evils of modern society, Mystery manages to escape.


Meanwhile, Ben Grimm has transformed back into his human form... except he's purple... and glowing.


I was hoping this issue would shed some light on at least some of the mysteries Bendis has been setting up for the last three issues. Alas, while this is the last issue of Ultimate Enemy, it is really just part four of a twelve part story (two more miniseries will follow). As is typical with lengthy stories by Bendis, not a lot happens in the middle. As such, this issue is not really worth your time.


There were some bright spots; Sue's confession to Ben gave us new insight into her character and was a great parallel to Ben's confession to her in the first issue. And Rafa Sandoval's artwork was beautiful.


Be sure to check back to Spider-Man Reviews for Ultimate Comics Mystery! 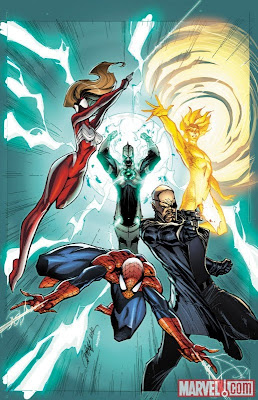