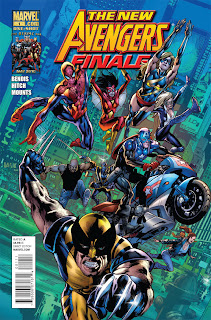 This issue gives us a closure about the Hood storyline, and is also a goodbye issue, since New Avengers is re-launched with a new #1. The events are taking place right after Siege, so be sure to read the final issue of the mini-series first!

Madame Masque, is asking Count Nefaria (her father) for help, cause the Hood is depowered, and they want to have something to fight back when the Avengers will come for them. The Avengers now, right after the Siege of Asgard are wondering if they will get arrested or not. When they see the Hood’s gang they realize that their boss is missing. The villains are happy to tell them about John King, mostly because the Hood brought them to Asgard with promises and he left them there.
The Avengers find John King and they threaten him to call Parker to see where he is. Spider-Woman asks Cage why they are doing this and he answers that the Hood all the wars have been fought and won, this guy was behind many things and he is maybe worse than Osborn, and whatever the future has for them, he goes down tonight. They start organizing a plan. Cage calls someone, to have their backs covered.
Nefaria is ready to give powers to the Hood when the Avengers are entering 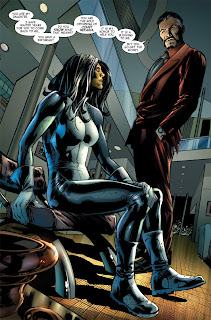 the scene. A huge fight starts, but it’s more cantered on Nefaria cause the Hood and Masque are quickly taken out of action. Nefaria starts shouting that he is immortal and then the missing member of the team appears: Wolverine, making a real damamge to him, so they can tie him up.
They go back to Asgard and give the captured criminals to Hill. She says to them to watch TV. The next day it is known that the SHRA is no longer a concern and they are free. Steve Rogers is top cop now and his first demand was to let those guys free. Mockingbird wonders what do they do now, and then we have some splash pages from virtually all artists that worked on the title. Cage has a long speech saying that for quite some time he thinks that they will know when they won freedom and liberty when they can have a walk in the park, free of convictions. And they do!

This was a very good issue and it did provided closure as Bendis have stated in interviews. The Hood was maybe the only lose end from the first volume of the New Avengers, though in issue #64 it was like saying that we haven’t seen the last of him, and I am sure we will see him again but not in the very near future. Anyone who wants even more closure for the Hood’s story should read Avengers: Initiative #35, also a fantastic farewell issue. Also, Count Nefaria was one of the breakouts from the Raft, the event that brought those heroes together.
Wolverine’s absence was something I really liked. I didn’t noticed he was missing until I saw him in action, BUT that actually made me realize that how much a great addition is to the team. Hitch’s art is also is great in this issue. What I also liked was that this book had extra pages of actual story and not back up features and stuff. Sure someone can say that the splash pages work as pin up gallery but they help the “farewell” theme so it didn’t bother me, plus it helps you see what the New Avengers have been through throughout this entire run.
The New Avengers not only made the franchise cool, but it also levitated it into one of marvel’s top sellers, to the point that the Avengers are more popular than the X-Men now. It really was (at least in the start) more “marvel’s famous heroes” than “mightiest” but after a few issues where the story started developing that really helped.
I was never a fan of the Avengers and I know that many people hate Bendis, but though he is not my favorite writer, he made me not only like this book, but also respect the older runs and the Avengers in general. So thanks for that, it was a great ride! I’m very intrigued on what the future holds for them now!