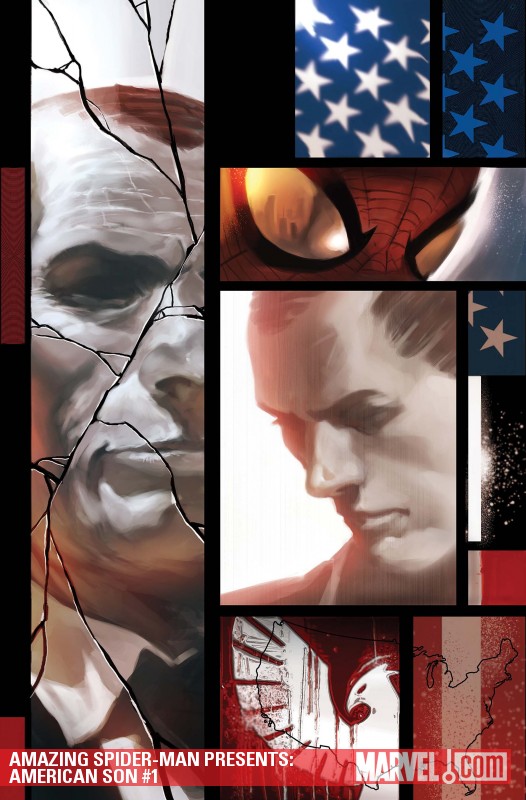 This issue was pretty good, yet the outcome of the first story was totally unexpected. In general however, I believe that I will be enjoying this story. The story takes place after Siege, i.e. after Norman Osborn has been taken out. Sometime during Dark Reign, Norman recruited his son to wield the American Son armor. Harry used it to challenge his own father, while saving Spider-Man's life. See Dark Reign: American Son

The Story
It all starts the night after Norman is taken out. A man in a hood approaches a truck carrying the American Son armor. He pays the truck driver off and takes the armor. At this point, its pretty obvious that it has to be Harry. The next day, Harry is seen at the Coffee Bean outlet he owns. Harry has been having financial problems. The coffee shop is not doing so well either.

The next scene shows some thug threatening innocents in the bus. Soon after, someone in the American Son costume appears and saves the day. The whole scene appears on TV and Norah, the flirtatious girl who was investigating Norman's case during Dark Reign, seems a little confused by it all.

She is next seen at the Harry's Coffee shop. At first Harry is suspicious and tells her to get out. Norah explains that she just wants a cup of coffee and is not here for an interview. All the while, Norah is observing Harry's actions. She concludes that he does not look well enough to be a superhero.

Harry is later seen taking some pills at the back of his shop. Being the son of Norman Osborn, and the only person who can wear the American Son armor, he is being stalked by everyone, everywhere he goes. Harry, goes home to Mary Jane's apartment. MJ herself is getting a little worried about her friend who has been behaving strangely recently.

She then calls Peter and tries to get him to talk to Harry. Peter agrees to do it the next morning. Meanwhile, Harry lies in bed, taking more pills. He congratulates himself saying that he did a good job helping people today.

The next morning an agent in a suit appears. He explains how his partner was mutated into a monster by Norman. This monster was taken out and killed by the American Son in Age of Heroes # 2. Harry denies being a hero. The agent then states that he was not here to talk about his partner's death, but about a theft of three hundred thousand dollars worth of diamonds, which could only be stolen by the American Son.

Annoyed, Harry walks out the shop to the back alley, only to be greeted by Spider-Man. Harry refuses to talk to him as well and goes back into the shop. Sometime later, I assume, a man walks into Harry shop claiming to be Gabriel Stacy - the other son of Norman by Gwen Stacy. He then shoots Harry in the chest.

The second story
The events that take place in this second story occur before the events in the first story. It begins with Spidey wondering to himself how Harry is able to stay so cheerful despite what he has been through. Peter is helping out at the Coffee Bean because it brings back good memories - his days in high school.

Harry has been having problems with paying his rent, along with some other bills. To top it all off, there is a new competitor in town, just across the street. Peter sits with Harry discussing ways to shut their competitor down. Peter comes up with a few ideas which involve some help from their old friends.


All seems to be going well until their competitor installs a 150 inch plasma TV in the store. At this point, Peter decides to do some 'Web Marketing' of his own. As Spider-Man, he steals Screwball's helmet. For those who do not know, Screwball's job involves disturbing Spider-Man to video record him with her helmet to put on the internet.

Anyway, he takes her helmet, swings by the Coffee Bean, and starts doing a small commercial for Harry, live on the internet.  Screwball, not far behind catches up and the two fight for a bit. Harry eventually comes out of his shop and starts beating the heck out of Spider-Man. The crowd loves it, and even Screwball sticks around to record it all.

In the midst of it all, Mary Jane appears stating that she just canceled all her appointments to come visit the bean. With an all famous supermodel having a drink at Harry's shop, the public crowd into the Coffee Bean. Thus the Coffee Bean lives to see another day.


Thoughts
Harry Osborn has been quite an interesting character since Brand New Day. He's been portrayed as a wealthy young man, who no longer wants anything to do with his father. Somewhere along the line, Harry's luck ran out. He found out that his girlfriend was a crook, and the mother of his father's child. Worst still, he learned she was using him all along. Harry became homeless, and is now having financial problems. Most recently, he has moved in with Mary Jane, and is thought by the public to be her boyfriend.

Now, it appears as though Harry has just been killed by his step brother - Gabriel.What really annoys me is that both their girlfriends of Peter and Harry have slept with Norman and had children by him. What is up with this guy??