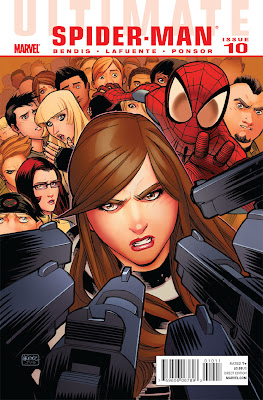 Picking up from where we last left our heroes; two anti mutant task force agents (packing heat) have stormed into Peter's class and have demanded that Kitty Pryde leave with them. Angered, Kong punches one of the agents in the face, and is quickly subdued. As Kong wrestles with the two agents, Peter tells Kitty that the only way to stop the madness is for her to leave. She agrees, grabs Kong, and phases through the ground into the sewer system. Once there, she and Kong share an intimate moment.

At an assembly to discuss what happened at school that day, the principal gives a speech at how disgusted he was at how the situation was handled and how everyone reacted to it. He then announces that he has tendered his resignation.

That night, Spider-Man, the Human Torch and Iceman head out to find and help Kitty. They find a media circus parked outside Kitty's house. Just then Kitty, (in her Shroud costume) blows up one of the vans. The Spider-Friends try to calm their friend down but to no avail. Kitty holds her own against the three heroes before disappearing into the sewer. Spider-Man tries one last time to reach out to her before leaving.

Mary Jane filmed the entire classroom incident, and from the looks of it, intends to make it a national news story.

Bendis delivers a strong second part to this arc. Kitty has been kicked around since the beginning of this series, so it was only a matter of time before something like this happened. Bendis does a great job with her character as we really understand and sympathize with her point-of-view. It was also nice to see her get back together with Kong. He's a good guy.

The principal's speech in the middle of the issue was a nice wake up call to a post Ultimatum world, though too many pages were devoted to it. I cannot really bring myself to care about that character.

While I prefer artists with a more "western" style I really enjoy David LaFuente on this book. He does a great job with action sequences (Kitty vs. Spider-Friends) and can also handle the quieter moments Bendis' scripts often call for (Aunt May's reaction to the principal's speech). He is a great fit for this series.

Ultimate Comics Spider-Man continues deliver a strong, unique Spider-Man experience. While the themes in this book definitely venture into X-Men territory, it's interesting to see Peter and his supporting cast dealing with these issues.