For those not following the Incredible Hulk current storyline, I highly recommend you begin reading it. As most of us all know, Bruce Banner is no longer able to transform himself into the Hulk. In recent times, a bunch of bad guys, lead by The Leader plan on drawing knowledge from the eight smartest people in the world - Reed, Doom, Pym, Hank etc.

Banner has been working with Red Hulk to stop them. I wont exactly spoil the whole story here, but just to stir your curiosity, we now have, Red Hulk, Red She Hulk, She Hulk, Savage She Hulk, Skaar,  A-Bomb, and Samson. All of whom make the story really good.

Anyway, Spider-Man has been playing quite a substantial role in this story as Banner recruits him, among others to help stop the bad guys. Somewhere along the line, Banner, one of the eight smartest guys, gets captured by the Leader.

Moral of the story, the plan fails, and everyone get turned into a Hulk. This includes Thor, Capt America, Deadpool, Spider-Man, Ms Marvel, the Fantastic Four, Wolverine and others - thus explaining the covers below. 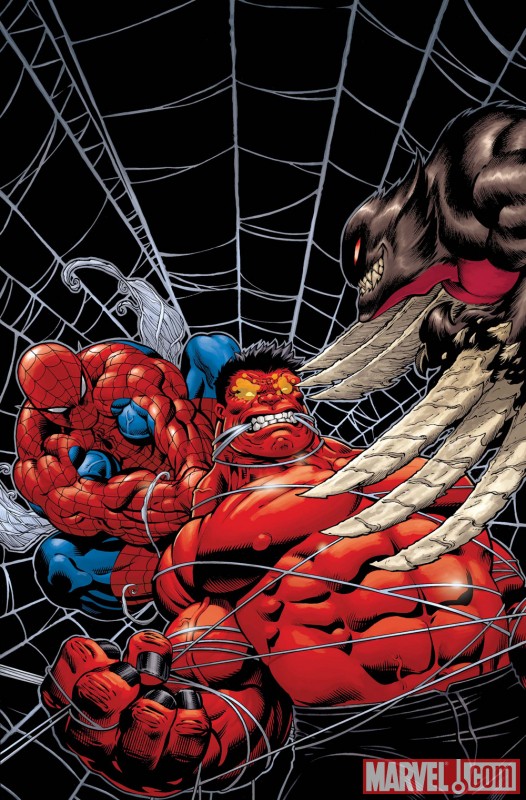 And finally, I have a scan from my favorite scene in Hulk # 22. Ps. This is the issue where the Red Hulk's identity is made public for us readers. 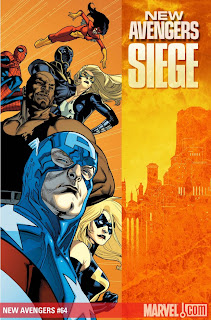 This is actually the final issue of the New Avengers, though the story obviously concludes in Siege (since this is a Siege tie-in), and the title ends with New Avengers Finale (In stores now). It shows what the Hood is doing during the event.

Norman Osborn is waiting for the Hood in the Cabal's meeting place, after Doom trashed it. The Hood is showing him the Norn Stones and Osborn is amazed. Osborn tells him about his plan on invading Asgard and the Hood tells him that he is with him, cause he owns Loki, and because Osborn backed him up when his gang went rogue.

Osborn then tells him what he and his gang will win: He will give him his old job, director of the Thunderbolts, who Osborn wants to replace the Avengers franchise. His gang will be his generals, and they all will have special forces immunity, which is a get-out-of-jail-free card.

Later the Hood tells his gang the situation and some of the like Mandrill want out. He understands that Osborn is using them and he does not expect them to live through it. The Hood takes away the power boost and is about to kill him so Mandrill can't do anything else (though it seemed like he was cared more about the power boost).

In the siege of Asgard we see fights and situations we have seen in the main book. Madame Masque is about to shoot Captain America when Sentry brings the whole thing down. The Hood has a similar situation like Ronin, he is searching for Masque. They decide to live, before the whole thing is blown to Osborn's face. But just at that time Loki give the power of the Norn Stones to the heroes. The Hood and Madame Masque escape anyway.

Presumably after the big fight, they are in hotel room watching TV. The Hood is depressed believing that the Avengers will come for him and he has nothing, and Masque slaps him saying that he has to be ready for them, and have something they will never see coming.

This was actually a very good issue. Since I was never a hardcore avenger fan I have managed to enjoy the New Avengers very much. I am happy also that we can have classic Avengers, and New. This issue seems like it's the conclusion of the Hood's story for now, and it seems like he is going to take a back seat for a little while. Seems like when we see him again he will be a little different. There's a nice touch with Osborn trying to explain why he would never have picked Fisk for this job. Art looks also very good, by Mike McKone.

Considering that the series ends between a huge crossover this is an interesting last issue that actually gives some kind of closure, at least for the Hood. I am very interested in seeing what his gang is going to do now, and what he will be up to, when we see him again. This also made me very excited to read the Finale.