She's baaack! Spider-Girl must satisfy some unseen demographic for Marvel, because I have no idea how else May "Mayday" Parker has managed to survive this long while other more popular titles have seen cancellation. You could argue that it is because of the sheer awesomeness of the title character, storylines and artwork, but business doesn't work that way. It's more likely that some Spider-Girl fans have mob connections. 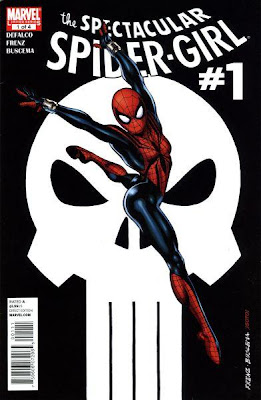 The Story
The Punisher prepares to return to New York City to take down Don Silvio.

The Black Tarantula attacks a group of Silvio's thugs and asks that they tell Silvio to stop interfering in his affairs.

May phones both Kaine and Normie Osborn and asks them to dig up information on Wild Card.

April (AKA Mayhem) meets up with Marko who informs her that Silvio is fire-bombing a couple of the Tarantula's bookie parlors in retaliation for the earlier attack.

At Cafe Indigo, May notices the attacks while out with her friends but finds herself unable to slip away. That is of course, until Wes "accidentally" spills some coffee on her. As Spider-Girl, May is able to rescue innocent bystanders and help the firefighters.

Meanwhile, the Punisher steals a drug dealers' plane and heads for the States.

Just as she finishes saving everyone May receives a call from Kaine. Although he was unable to get anything on Wild Card, he does warn her that the Punisher is coming to town.

This issue best serves as an introduction for those who are new to the Spider-Girl character and her world.

There are also things that will appeal to long time Spider-Girl fans. Aside from the excellent Ron Frenz artwork, there's a great sequence where DeFalco draws parallels between Spider-Girl and the Punisher. Spider-Girl saves lives, the Punisher ends them, but the two have similar motivations and ultimately similar goals. This issue also reopens the issue of whether Wes knows that May is Spider-Girl. Hopefully by the end of this mini we will have the answer.

This issue offers a great introduction to Spider-Girl and kicks off what looks to be fun four issue mini. I would encourage all Spidey fans to check it out. 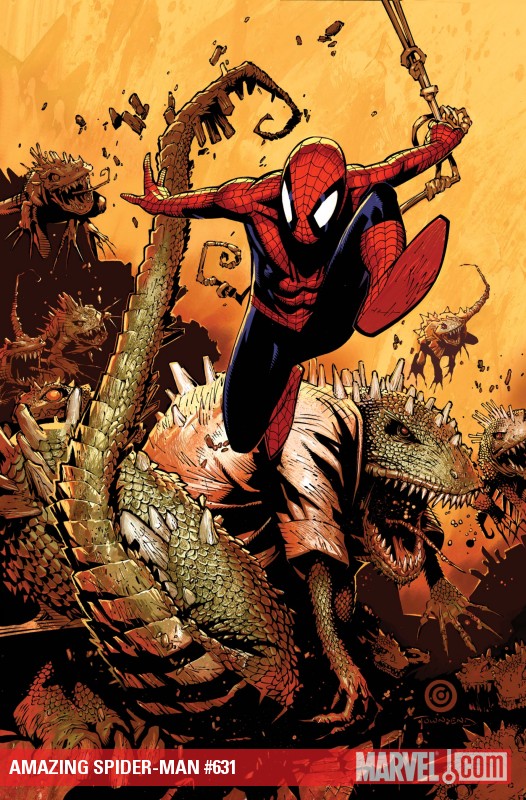 This awesome issue starts with a letter that the evil Aunt May has written to her husband. In the letter she simply complains about the whole world, and how life sucks at the FEAST. Obviously, she is possessed.

Anyhow, the real story starts with a character we haven't seen in a while.

The story
So the story starts with my favorite clone - Kaine. Kaine is being harassed by Ana Kraven. He is almost killed when he manages to touch her with his acid touch. He makes an escape and is not pursued only because Ana is stopped by her elder brother I presume - Aly.

Aly explains that now is not the time to play. She is only allowed to hunt after the gauntlet is completed. He also tells her that the Lizard has hatched. Obviously, somehow, the Kravens have been manipulating everything that has been happening to Spidey recently.

In another scene, Peter Parker, for the first time is being stood up on his date. Carlie, apparently is unable to join him for dinner due to a case that has developed in Dr. Connor's office. See Amazing Spider-Man 630.

Spider-Man later appears at the scene, filled with human body parts. The Lizard obviously ate everyone in the office except for the girl who is now in no condition to speak. In the midst of the conversation, Billy's name comes up. ( Billy is Dr. Connors son)

Spidey immediately rushes to Billy, only to find the Lizard already there. Knowing fully well that Dr Connors is aware of his surroundings, but unable to stop himself, Spider-Man tries to talk to him to awaken Dr Connor's consciousness. For a moment, Dr Connors appears to be gaining control. The Lizard however finally shuts him out.

Spider-Man and the Lizard fight for a while until Spider-Man hears a cry for help. The Lizard suddenly stops his attack and walks away. Spider-Man puts a tracer on the Lizard and tries to help the lady in the next room.

Back in the Lizard's mind, Dr Connors cries out to Spider-Man not to let the Lizard go his way. Inside the reptiles head, Dr Connors knows that the Lizard has caught the scent of his son. Spider-Man, is too late to find out that someone else has already kidnapped Billy.

Elsewhere, Ana Kraven has Billy in custody. She then cuts him loose once she hears the Lizard approaching. As the Lizard nears the boy, Dr Connors tries his best to fight the Lizard, but fails. At the end of the issue, it is assumed that both Billy and Dr Connors subconsciousness are dead.


There really is not too much to think about here in this issue. Most things are written very straightforward. I hope to see a team-up between Kaine and Peter in time to come. With both of them being hunted, the likelihood of this happening is pretty high.

Is Dr.Connors really dead? Hard to say. Is Billy dead? Quite likely that he is.
Read More
Newer Posts Older Posts Home