The many loves of the Amazing Spider-Man 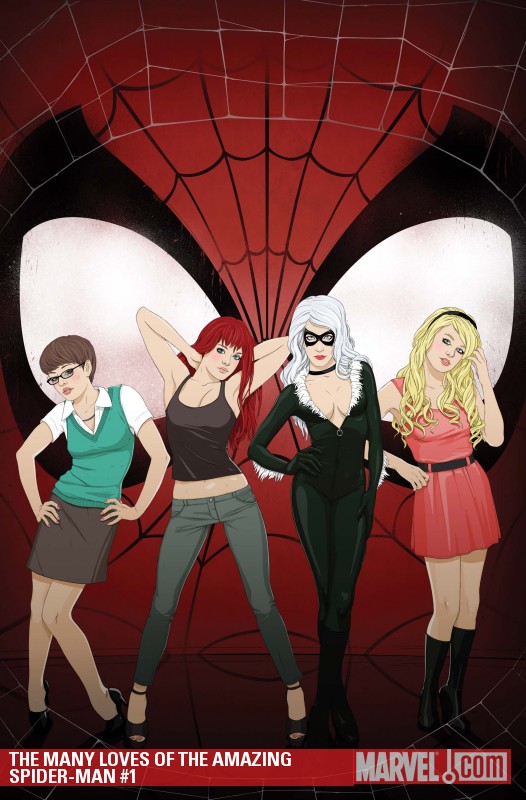 Probably the first thing that stands out about this issue is its absolutely unreal cover. As can be seen, the cover features four women previously in Peter Parker's life, all, posing strangely. Regardless, this issue is split into three interesting stories.

First story
The issue starts several years ago with Spider-Man complaining about his financial life. He complains about his current financial situation and considers finding a full-time job. While chatting with a homeless guy, he notices that there is a bank robbery taking place.

Upon entering the bank, he sees that the Black Cat is busy fighting off a giant robot. Spider-Man comes to save her just before she gets crushed. Strangely enough, the robot malfunctions soon after Spider-Man arrives.

The two then proceed to stop the main crook, some noob who is using his newly learnt magical abilities to rob the bank. Spider-Man jumps on the crook as he is casting a spell, causing some of the magic to zap Spider-Man. Strangely, there are no side effects. The crook is taken to jail and the two split.

When Peter returns to his apartment, all the money from the bank magically appear in his room. As Aunt May starts coming in, he tries to throw it out the window. Magically, the money reappears in his room again. With no choice, Spider-Man bags the cash and takes it to the bank. The cash however continues to stick to him - literally.

Spider-Man asks Felicia for help, who cant stop staring at the cash. The two decide to break the magic man out of jail to get him to break the spell. Upon the breaking him free, the magic man, who prefers to call himself the Occultist, casts another spell, creating a giant money monster. Not thinking through his plan properly, the money monster, made of paper doesn't really hurt anyone. Spider-Man knocks the crook out and everything is back to normal.

Spider-Man is tempted to steal some of the cash lying around, but decides not to in the end. He does however give a little bit to the homeless guy he was talking to at the start.

Second Story
This story is about Carlie who just sent Peter home after they're long awaited date, due to a headache. This story is supposed to take place during Amazing Spider-Man 627. As she sits in her office, she notices an article that takes her back a couple of years, when she was a kid.

Carlie's father did not want to leave his daughter home alone. As such, he brought her to his work place - the police hq. Apparently Gwen Stacey was also brought to the police station. The two are left alone in Captain Stacey's office. Extremely bored, they decide to look through Captain Stacey's things. They come across a case about the murder of young girls. In the midst of looking through the pictures, they discover that teh murdered girls are all dressed to look younger, like someone else.

They eventually get caught and taken out of the room. The girls explain what they found, and although they did something illegal, it apparently helped to solve the case. Carlie is told that one day, she might be able to do police work.

Third Story
The final story is about Mary Jane, the girl who almost married Spider-Man. (But we all know what really happened). This short story takes place after MJ returns to New York. She is now famous, and stalked by all. Anyhow, MJ gets into her limo and quickly changes her clothing and washes her make up to give her a simple look. Apparently she wants to audition at the cattle call, - a small time soap opera audition I suppose.

Midway however, there is a traffic jam taking place due to Spider-Man fighting Lady Stilt-Man. She decides to get out of the car and walk the rest of the way. Anyway, she goes in with the alias Emma Holmes, wearing a black wig and is called to show what she's got. Thinking about Peter as she acts, her emotions are fully visible. Everyone is extremely impressed with her acting. Unfortunately however, she is too beautiful for the part, as they need a simpler look.

After the audition, she heads over to her book signing session at the bookstore. There she sees a book of Spider-Man photos taken by Peter, published sometime back. It is now selling for only $3.99. She contemplates calling him for a while, but decides she has to move on. The final panel shows MJ enjoying all the glamour and attention, yet she is unsure if this is what she really wants.

Thoughts
Overall, all three were pretty good stories. I especially enjoyed the art in the first story. Black Cat and Spider-Man are made to look a lot younger. The art also compliments Cat's cheeky behaviour. Seeing Gwen in the comics again was also good for a change. As for Mary Jane's story, it isn't anything new. We all know she's torn between two worlds and is living in denial about her feelings for Peter.