"Now, let us see if the spider can catch the fly!" 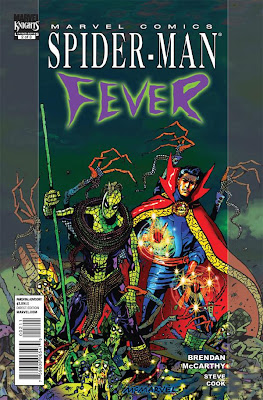 
We last left Spidey as he was about to be devoured by spider-demons. Before they attempt to eat him one of the demons points out that Spider-Man's soul is both spider and human, and that spider-demons cannot eat one of their own. In order to determine whether Spidey is human or spider, the spider-demons send Spider-Man to catch the sorror-fly.


Doctor Strange follows the webwaze track to save Spider-Man. Along the way he meets up with the two talking dogs seen last issue. They warn Strange about the spider-demons.


Spider-Man is seemingly talking to the spider that gave him his powers. The spider informs him that his powers are magick in nature. Soon, Spider-Man finds himself surrounded by thousands of insects.


Doctor Strange frees a witch that was caught in a spare-snare (a sigil powered trap). In gratitude she provides him with a faster means of getting to Spider-Man.


The insects are afraid of Spider-Man and back away. Spider-Man then finds the sorror-fly, who turns out to be Crawley's student, Victor. Apparently Victor was given somebody's last egg which he then gave to Driddil who put it in the real world. The spider that bit Peter Parker was in that egg, and now it lives on through Spider-Man... or something.


I am surprised by how quickly the novelty of this series is wearing off for me. Part of the problem are the new wrinkles to the plot introduced here. Brendan McCarthy is attempting to give Spidey's origin a magical twist, similar to what JMS did during his run on Spider-Man. It has made the plot needlessly complicated and hard to follow. This book would have been better served by keeping the plot simple, as its main attraction is the artwork.


Like last issue, the art here is a real treat for the eyes. The bizarre dimensions and the level of detail McCarthy puts in his artwork is amazing. There's a particularly cool image with Spidey wearing his webbing as a hood and boots while holding a spear.
Spider-Man: Fever continues to be an interesting experience. While the second issue was not as fun as the first, I am interested to see where McCarthy takes his spin on Spider-Man's origin.
Read More
Newer Posts Older Posts Home