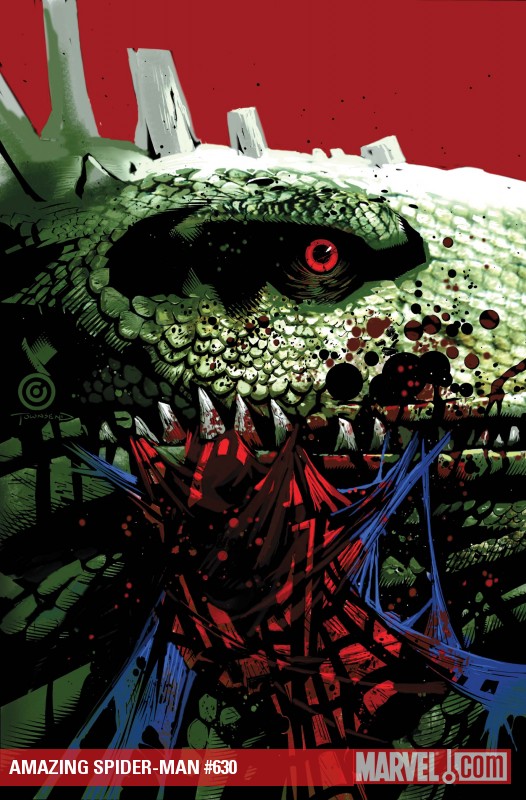 This issue features Felicia, Carlie, Harry, a mean Aunt May, the Kravens and Dr Connors. Overall, a very short and simple, straight to the point issue. In fact, Spider-Man is only shown in the first few pages of the issue with the Black Cat.

The Story
The story begins simple enough with the Black Cat and Spider-Man taking on some small time crooks in a truck.  Felicia pretty much handles the whole situation herself with her bad luck powers, which affect everyone around her, even Spider-Man.

After busting the bad guys, Felicia hints that she wants to go somewhere private to have some 'fun' with Spidey. Spider-Man, like he did in Amazing Spider-Man 621, gave a number of excuses. Felicia, not being an idiot senses that Spider-Man has someone he is interested in his personal life. She reminds him again, that they are not a couple, and tells him to pursue anything better that comes along the way.

Spider-Man watches as Black Cat swings away. Obviously he is pretty heartbroken as he had hoped that something real could develop between Felicia and himself.

Meanwhile, Dr Connor is seen paying a visit to his son. Due to his history, his son had been taken away from him. After spending what seems to be a minute or two trying to create some conversation, he is asked to leave.

We next see Peter making a phone call to Aunt May. Aunt May, is still 'negatived' at this point by Mr Negative. As such, she is still quite heartless and could not entertain her nephew who needs some advice with  girls. Just as Peter hangs up, Harry walks in. Harry, although homeless, with no cash on hand, still seems to be rather perky and teases Peter about his luck with girls. He essentially advises Peter to go for Carlie.

Back at Phelcorp, Dr. Connnor is still fighting the Lizard within him. He seems to have some feelings for his lab partner - Marissa. Whether these feelings are genuine or just part of the Lizard's nature is unknown, although it is more than likely to be part of the Lizards's nature.

Just then, King, Dr. Connor's boss who does not see eye to eye with Connor, walks in and says he needs to 'use' Marissa for a while. As he walks out, he asks Marissa if she has been to the opera. Back at the Kravens place, Madame Web sees all things that are taking place. Sasha Kraven instructs Ana  (her daughter) to nudge the players in a different direction.

Peter, taking Harry's advice, decides to visit Carlie. He buys her lunch, saying that he wanted to make up for missing their lunch date the other day. The two flirt a little and end of story.

The next day, at Phelcorp, Marissa comes to work early. She says she spent the night in the city. Automatically, Dr. Connor's lizard instinct becomes jealous upon discovering that his interest had slept with King. Dr. Connors becomes furious and rushes to a room. (The same one in Web of Spider-Man 6.) All this while, the Lizard's voice in him becomes more and more prominent.

Just then, King comes in. Dr. Connors warns him to stay away. King sees Dr Connors holding a bottle of lizard serum and tries to stop him. Dr. Connors then calls him an idiot for stopping him. Contrary to what the reader thinks, the serum, is designed to keep the Lizard in, instead of releasing him.

Unable to take the serum in time, Dr. Connors transforms into the Lizard.

Thoughts
I for one, was certainly fooled into thinking that Dr. Connor was in fact looking for the serum to transform himself, as I mentioned in the review for Web of Spider-Man 6. Looks like, Spider-Man will be having a handful here in the next issue or so.

Peter on the other hand seems like he will be pursuing a relationship with Carlie after all. In his conversation with Harry, MJ's name comes up. Harry states that he and MJ are now roommates, like two peas in a pod. Peter stays silent for a while. Putting all things aside, we all know that Peter is not fully over MJ yet. No point denying that. He also called MJ, to chat about his problems, not Harry, who happened to answer the phone.