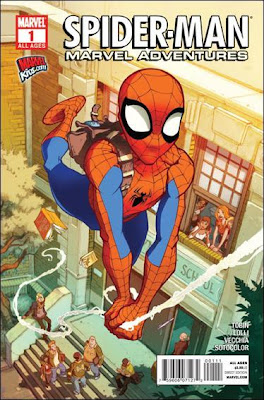 
Gwen Stacy is writing a school paper on Spider-Man. To do this she interviews various New Yorkers about their thoughts on him.
Spidey is trying to expose Clive Baraby, a Supreme Court judge getting paid under the table by the Torino crime family. He finds Baraby meeting up with some goons at a deli. Spidey takes out the goons, but leaves once he realizes he cannot prove Baraby was in league with them.
The Torino family stash Baraby in the Mandarin House until they can take out Spider-Man. Spidey finds Baraby and takes out several guards before accidentally bumping his head on the ceiling. Pretending to be severely injured, Spider-Man retreats with Baraby and the criminals right behind him. As Spidey exits out the front door a squad of police officers arrest Baraby and the criminals, who are caught red handed brandishing firearms. It turns out Spidey had his girlfriend, Sophia Sanduval (who apparently knows Peter is Spider-Man), call the police when he entered the Mandarin House.
Gwen comes to the conclusion that Spider-Man elicits hope or fear in the people he crosses paths with. Time will tell whether he validates the hope or justifies the fear.
Thoughts
Being new to the Marvel Adventures universe, I was hoping that this relaunch would provide me with an introduction to this version of the Marvel Universe. As an introduction, this issue does not work as well as I had hoped. The "Gwenterviews" (yes, she actually calls them that) were dull and did not tell us anything we did not already know about the public's perception of Spider-Man. It would have been nice if the first issue took place from Spidey's point-of-view.
We also do not get to see much of Peter's social life. Aside from a brief classroom scene, there is not much Peter Parker in this issue.
Spider-Man trying to expose a corrupt judge was pretty run-of-the-mill stuff. Though I will say that Peter taking what he learned in history class and applying it to his situation made for a great climax.


Marvel Adventures Spider-Man serves as a decent introduction to the Webhead for very young readers. However, there is nothing here so far that will excite older fans of the character. Best to stick with Amazing and Ultimate.
Read More
Newer Posts Older Posts Home