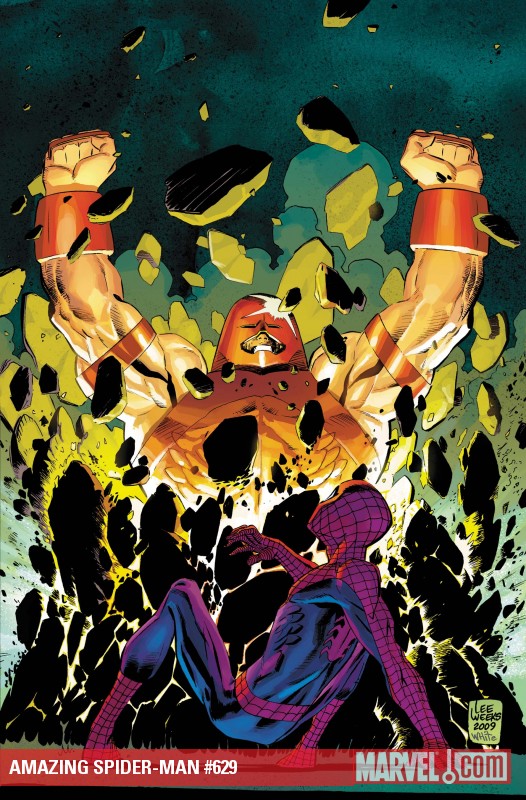 
The issue starts with an unnecessary scene of Carlie talking to another cop - Brenda about the events that have recently taken place. She finds out that Spider-Man was suspected to have played a part in Juggernaut's escape.

Meanwhile, back to the important part, Spider-Man and Juggernaut are suspended in the air, and transported to an 'unreal realm.' As would only happen in comics, movies and cartoons,  Captain Universe decides to explain why he wants to kill Juggernaut so badly. Apparently, when Juggernaut walked through one of the buildings in 'Nothing can stop the Juggernaut, ' there was an employee who worked at that building who lost his job, girlfriend and a number of other things.

This poor guy was about to commit suicide when the enigma force suddenly chose him as the new Captain Universe. Being closed minded and non-ambitious, this Captain Universe decided to take his revenge on Juggernaut.

Midway, through the story, Juggernaut interrupts calling Captain Universe a wimp and a loser for trying to kill himself over unemployment. Captain U., then goes into Juggernaut's mind to see what happened to Juggernaut's life that gives him the authority to judge.

Apparently, when Spider-Man left Juggernaut to sink into the building foundation the last time they met, it took him a month to get out. By the time he finally got free, he no longer wanted revenge. Instead, he was grateful for a breath of air.

By the time the story telling finished, another earthquake began. Apparently, Capt. Universe did not properly fix the problem in Amazing Spider-Man 628. Making his highest priority killing the Juggernaut, instead of fixing the problem along the fault lines caused the Enigma force to leave. The Enigma force instead chose Juggernaut to be the next Captain Universe.

Juggernaut secures both Spider-Man and the former Capt Universe - Nyugen, in a force field. He then carries on to fix the fault lines causing the quake. Spider-Man  in the meantime, pushes the force field in an attempt to roll away, much like a hamster does in a plastic ball.

After creating a second protection around themselves within the ball with his webs, Spidey crashes into an
electrical transformer. The explosion sets them free, but not before Captain Universe/Juggernaut returns. Before Juggy can kill Nyugen, Spider-Man somehow manages to convince him not to. Juggernaut agrees, and the Enigma force leaves him, as there was no longer a threat to mankind.

Nyugen later goes on to write a book called  'I survived the Juggernaut,' telling his story, and sends profits to a foundation for people down on their luck. Peter, watches as Nyugen is being interviewed on tv. He then goes off with his date, Carlie.


Second Story
The second story involves Dr. Conner, the former Lizard doing some experiments with iguana's, as usual. He was last seen in Web of Spider-Man 6. In that issue the Lizard in him was already beginning to take control. In this story, while conducting an experiment, one of the directors, or shareholder's finding his experiment barges in and decides challenge Connor's authority.


Thoughts
I'm definitely grateful that Spider-Man did not end up comparing Captain Universe's case to his own case of unemployment. Its amazing that Juggernaut actually let Nyugen live. While fixing the fault lines, Juggernaut realizes that these cracks in the earth were actually caused by himself a couple of months back.

By the end of the issue it seems as though Juggernaut had learnt a lesson. Could it be possible that he would become and Anti-hero soon? Also, I noticed that Spider-Man has been having quite a bit of luck getting bad guys to swallow their ego and do the right thing. In case you did not get it, I am referring to the Rhino here.