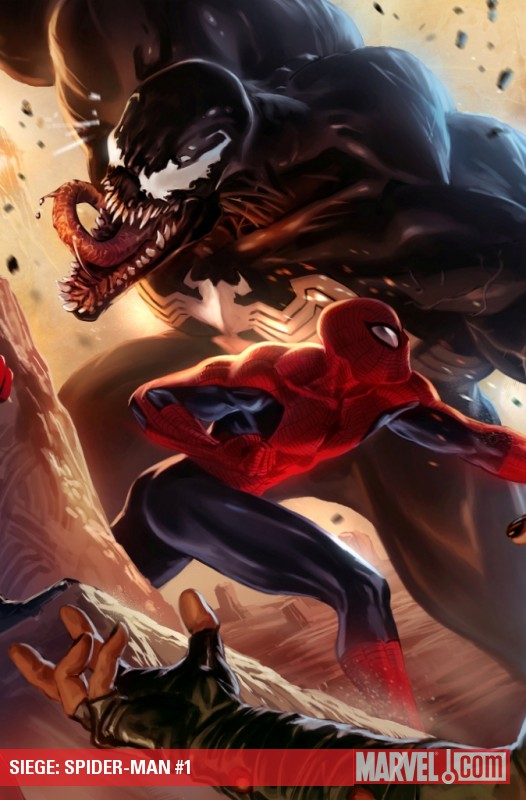 This issue focuses on a small, highly anticipated fight between Spider-Man and Venom during the war at Asgard.  All fans have obviously been waiting for a long time for this fight. Personally, I found this issue disappointing, only because of the extremely high expectations I had for it.

The Story
It starts with Mac Gargan, the former Scorpion, as Venom, talking to himself. He knows fully well that this is the final war and after this he's in trouble. Nonetheless, he takes advantage of the situation and savors every moment of the battle - literally. This new Venom has grown to love eating people, and now 'gods.'

Spider-Man interferes half way to beat his enemy. The two fight and fall down from Asgard to the ground. In case you did not know, Asgard is in the sky. While on the ground, Ms Marvel comes to help Spidey out. In a few seconds, Spidey gives her an update about Venoms powers and weaknesses. Ms Marvel conveniently takes the liberty of pulling Mac Gargan out of the Venom suit.

The symbiote then covers Ms Marvel and uses her as a host. Enjoying the power she has, Venom proceeds to kill Spidey. Spider-Man obviously doesn't die since he has his own comic book title. He dodges Venom's blows, while Ms Marvel struggles to get free. At one point, Ms Marvel hints from within the symbiote that she needs more energy. Spidey then kicks Venom into an electrical power box. Ms Marvel bursts free while the symbiote returns to Mac Gargan.

Spider-Man continues his fight with Venom, complaining about how Venom had framed him, while pretending to be Spider-Man in the Sinister Spider-Man 1-4. In the midsts of fighting, Venom states that he felt Ms Marvel's emotions toward Spidey when she was his host. Spider-Man pauses in wonder long enough for Venom to throw a punch at him.

Just then, Ms Marvel comes back into the picture. The two work together to 'Baseball bat' Venom into the Dark Avenger's aircraft. Ms Marvel then flies Spidey back to Asgard and tells him that she wants him to stay in the Avengers. Apparently Spider-Man feels that he does not belong with the Extra Super powered heroes, fighting gods. The issue ends, suggesting that Ms Marvel does in fact have feelings for Spider-Man.

Thoughts
For starters, this issue was a little below expectations. I was expecting this issue to be the end of Mac Gargans reign as Venom. The fight ended badly with Venom simply being batted into the aircraft. As readers we all know that this did absolutely nothing to Venom in terms of injury.

Spidey refers to the events that took place in The Sinister Spider-Man, a miniseries I decided not to review after reading the first issue. I was not all that impressed.

Probably the highlight of this issue are the subtle sparks between Ms Marvel and Spider-Man. They've been on a date before in Ms Marvel 47. In my opinion, this relationship could never work.
Read More
Newer Posts Older Posts Home