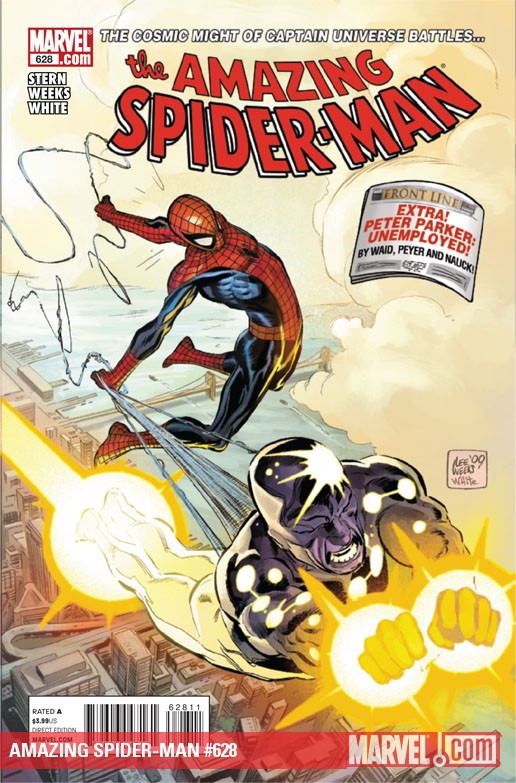 In midst of conversation, Spider-Man mentions that killing Juggernaut would not please the Enigma force. Surprised for a moment how Spider-Man has any knowledge of the Enigma force, he pauses to take a good look at Spidey before throwing both Juggernaut had Spidey out the window at light speed. At least that is what it looks like.

Heading straight for a mountain, Spider-Man tries to use his webbing to create some sort of a bumper to ease their landing. As Captain Universe catches up, he notices that Juggernaut is remarkably still in one piece, while Spider-Man is missing.

Spider-Man jumps on Captain Universe and covers his eyes and rides him like a horse. Before long Spider-Man finds himself regretting his action and tries hard to escape Capt. U's sight. Meanwhile, Juggernaut wakes up, and slowly regains his memory as to what happened.

In the meantime, Spidey is still trying his best to escape Captain Universe, who clearly is not so experienced as a superbeing. Eventually. Spider-Man is caught, and before he can talk his way out of anything, he is caught and tied up by metal bars.

As the ground beneath them starts quaking, Captain Universe informs Spidey that he will deal with him later and attend to more important business. At that, he dives into the ground to 'repair' the problem. Back on the ground, Spidey is struggling to get free when Juggernaut appears.


Yes, there is a second story, of which I am not sure when it takes place. The story begins with some thugs disturbing a man in a hoodie. This guy turns out to be Absorbing man, who can absorb whatever material he touches. At the moment, he touch some bricks and is now a 'stone killer.'

Parker in the meantime is late for a job interview that Betty managed to find for him. Without a job, he is saving is cash and decides to save his webbing. He dresses as Spider-Man and webs his irons clothes to his back. He is next seen jumping from building to building. ( saving his webs)

To make this comic even more comical. His, would be employer calls up to say that he's stuck in a jam and can't make the interview. Peter manages to convince the interviewer to conduct an interview over the phone. With all the Parker luck in the world. Absorbing man spots him jumping around and decides to take him out.

Peter is now travelling without webs, going through an interview, saving innocent bystanders and dodging Absorbing man's blows. Strangely enough, Peter seems to be impressing his interviewer over the phone until his interviewer states that he just saw Spider-Man catch a truck. Forced to hang up to prevent his identity being blown, Spider-Man continues to fight Absorbing man. Just then Iron Man ( Tony Stark ) appears and takes care of the situation.

Peter walks out the alley, having ruined his only good suit, with no chance of getting a job again.

Thoughts
I thought these were both excellent stories. Clearly, the second story takes place sometime in the future since Iron man is back in town. This second story is just a perfect illustration of Peter Parker's bad luck with life. This story was also comical and reminds me of why I like Spider-Man and not Iron Man.

As for Captain Universe, it was fine. For a moment it seemed as though Juggernaut was actually going to kill Captain Universe. Obviously, from the last panel, that was not about to happen.
Read More
Newer Posts Older Posts Home