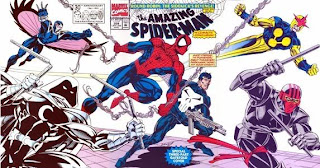 The 90s. One of the worst decades in comics, or some they say. Let’s remember what was happening in Spider-Man by the time this story was published: David Michelinie was still writing Amazing Spider-Man, the yet unknown Mark Bagley just started his run (after McFarlane and Larsen) Venom had just started his “I wanna eat your brains phase, and McFarlane (and Jim Lee in X-Men) polluted the industry with variant covers, and started the madness… Michelinie took a short hiatus and Al Milgrom wrote this 6 issue bi-weekly saga.

Round Robin: The Sidekick's Revenge is not Kraven’s Last Hunt or Death of Jean DeWolf, so if you are searching for that kind of story you’re out of luck. It’s a fun, action packed story, with Spider-Man teaming up with characters marvel was pushing at the time: Moon Knight, Darkhawk, Punisher, Nova and Night Thrasher, and if you read it just for the fun of it you will sure enjoy it! 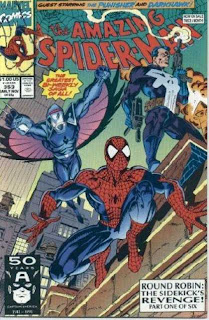 The story is about Midnight, Jeff Wilde, Moon Knight’s former sidekick who was apparently killed by the secret empire in the pages of Marc Spector: Moon Knight (in a story guest starring Punisher and Spider-Man). Midnight is revived as a cyborg by the Secret Empire who wants to use him as a new age cyborg soldier to become a more credible threat. They order him to free Elliot Franklin, the Thunderball from the Wrecking Crew as to help them make more tech soldiers, and that’s where our heroes enter the scene, and the story builds up to an old fashion good vs evil war against Spider-Man’s team and the Secret Empire.Sure it’s a very strange band of heroes but the truth is that everyone is added to the mix very believable: Elliot Franklin was in a jail in Queens, Spider-Man was passing by and Darkwahk was nearby (both located in Queens), Midnight is Moon Knight’s former sidekick, the Punisher was hunting the Secret Empire by himself (and he is slowly added to the mix), and Night Thrasher is trying to retrieve his abducted New Warriors teammate, Nova. The Empire also hire the Seekers a band of villains who had only two appearances before, not in Spider-Man. There’s also a mystery nurse, intrigue cause Number One was murdered in jail and the elite members try to fill the power vacuum, a nice little stealth mission, and action, action, action! 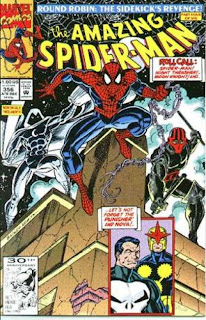 There are countless puns and jokes, some really funny and some very campy, but that really didn’t bother me cause I was more focused on enjoying the story. One of the best parts is also that Milgrom lets the characters compare their origins and you can see what different paths someone will take after some similar situations. There’s a great scene between Midnight and Darkhawk, and an even better between Punisher, Night Thrasher and Spider-Man. 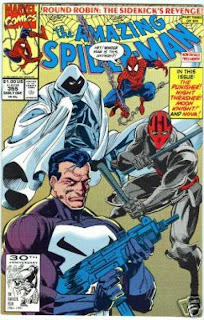 Also the art is fantastic and you can see why Bagley was loved so much. It’s also interesting to notice that at 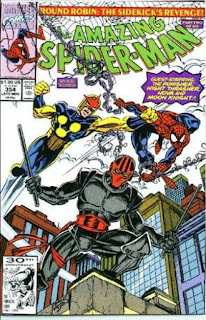 the time he was also penning New Warriors and a bi-weekly Amazing Spider-Man and comparing the two you will see equal great job in both books. Bagley is one of those artists who maybe would not fit in a monthly Moon Knight book for example, but he draws every character equally fantastic.Ironically, none of those characters had a good future at the time: Spider-Man had his clone saga and it took years to become popular again, Punisher went from great to boring during the 90s and it took Ennis to revive him, Moon Knight was never popular and was canceled after almost 30 issues, Darkhawk after almost 40 issues and appeared again in Secret Invasion, Midnight only appeared again in Charlie Huston’s Moon Knight run, the Wrecking Crew is not considered a credible threat even to this day, the Secret Empire was virtually destroyed after this, everyone know what happened to the New Warriors in Civil War, though Nova is doing good now, and the Seekers… I don’t think they ever had a fourth appearance. But don’t let this bother you! These issues are cheap so if you find them don’t hesitate to buy them, it’s not essential reading sure, but it’s a fun story with Spider-Man teaming up with a strange band of heroes, a classic action story. 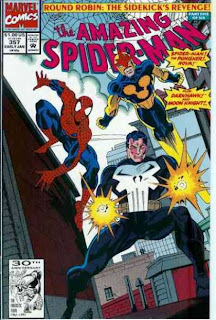 Michelinie returned in the next issue though Bagley took a short hiatus and the two reunited in the first Carnage story. As an epilogue I will say that this was one of the first stories I remember reading and it not only made me love Spider-Man more, but it also made me get interested in those other characters appearing. So I guess it served its purpose.
Read More

The most overdue development in Ultimate Comics Spider-Man's short history occurs in this issue! 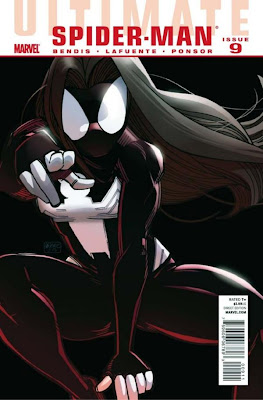 Spider-Woman and the Human Torch team up to take down a mother/daughter supervillain team. The Torch, smitten by Spider-Woman, begins to hit on her. She initially brushes him off but the Torch follows her behind a billboard where he watches her unmask. The two continue to flirt...

Gwen Stacy lures her boyfriend, Peter Parker, into the girl's bathroom where Mary Jane and Kitty Pryde are waiting to give him a long overdue hair cut!

At the Parker residence, Johnny declares that he is in love with Spider-Woman and that the two of them made out. Disturbed by this, Peter storms out of the house and attempts to take his mind off the situation as Spider-Man (for those of you not in the know, Ultimate Spider-Woman is a clone of Peter Parker, but with girly parts). 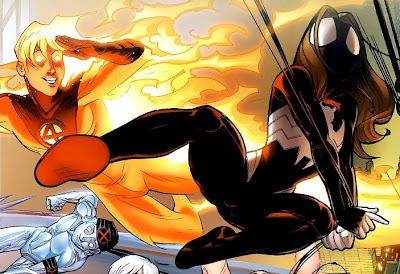 At school the next day, Peter's class is interrupted when the principal walks in with two anti-mutant task force agents who demand that Kitty Pryde leave with them. Kitty refuses to leave, and Peter backs her up. When one of the agents pulls a gun, Peter tells Kitty to run.

Peter Parker finally loses that awful hair he's had since Ultimate Comics Spidey launched with David LaFuente as artist. It was a great scene, and LaFuente is a good sport, as Bendis pokes a little fun at his art style.

Loved Peter's reaction to Johnny's relationship with Jessica Drew. What Bendis is trying to say about the Peter Parker/Johnny Storm relationship is a question best left to braver reviewers than I, but this bizarre situation is bound to create awkward tension between the two in the issues to come.

With plenty of action, humor, and drama, this issue of Ultimate Comics Spider-Man is a great start to a promising story arc. If you have been on the fence about whether to pick this book up, this issue is a great jumping on point.