Kraven gets hitched! A new foe for Spider-Girl! The return of Paper Doll! All in the same issue! Enjoy it while you can 'cause next month Web of Spider-Man changes its format. 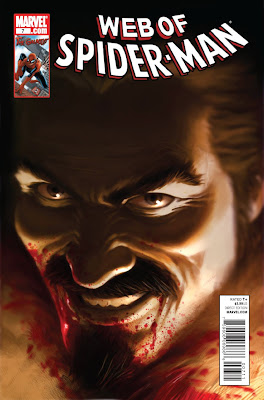 The Story - Gauntlet: Origins Bride of the Hunter

Decades ago at the Roskolov Estate, Sergei Kravinoff regales Europe's elite with tales of his exploits. In the middle of one of his stories Kraven gets a drink thrown in his face by a woman who then leaves the estate. Kraven confronts her outside and explains to her why he does what he does. They are interrupted when one of the guests informs Kraven that his mother is making a scene.

The next morning, the woman, who we now know to be Sasha Nikolaeviche (currently responsible for the Gauntlet) leaves Kraven's hotel after sleeping with him. She returns home where her father congratulates her on "bagging" a wealthy Kravinoff and securing her family's future. However, Sasha has no intention of sharing her "kill" with anyone, and drops her father down an elevator shaft. She marries Kraven soon after.

A freelance supervillian called Wild Card showcases his skills by attacking a group of the Black Tarantula's thugs. Man Mountain Marko witnesses this and offers him a job. 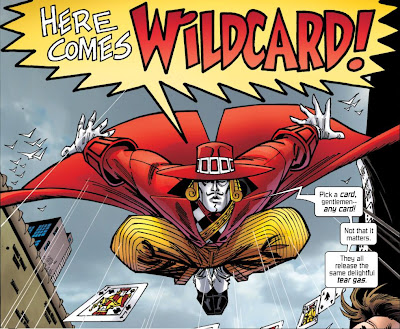 Back at Silvermane's hideout, Marko informs him that he gave Wild Card a test; take down Spider-Girl. One of Silvermane's henchmen, Guido, heads down to Silvermane's wine cellar (without his permission) and sees someone inside that shocks him.

At Midtown High, Wes takes May aside and reveals that April kissed him while she was posing as her. Upset by this, May heads off intending to give April a piece of her mind.

After school, May goes webslinging to clear her head and is attacked by Wild Card.

Meanwhile Gene Thompson takes April on a date to the batting cages. April, already unimpressed at where her boyfriend decided to take her, destroys the pitching machine when Gene brings up his past relationship with May.

Wild Card possesses and unusual amount of knowledge of Spider-Girl's abilities and easily defeats her. He warns her to stay out of the gang war.

Elsewhere, upon being informed of Silvermane's return, the Punisher comes out of retirement.

Peter Parker is sent to take photos of a fashion show which, much to his chagrin, is being hosted by Mary Jane. Paper Doll crashes the show, intending to get revenge on MJ for ruining Bobby Carr's career. Spider-Man intervenes, and with the help of MJ, saves the day. 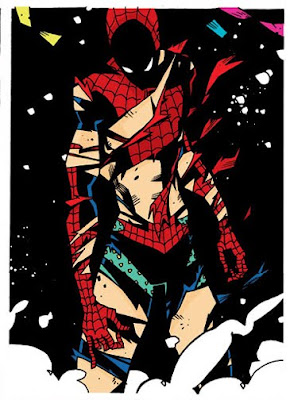 Kraven's Gauntlet: Origins story is different from previous ones in that it directly relates to what is going on in Amazing Spider-Man. Not only does it give us insight into Kraven's character, but also Sasha Kravinoff's. Past Gauntlet: Origins stories have done little but offer bits of trivia about the villain they were spotlighting. "Did you know Electro was visited by Magneto before he started his super villain career?" "Did you know where the Rhino was before he came to New York?" "Did you know that the Lizard's origin ties in with Man-Thing's?" These are nice tidbits you can bore your friends with, but unimportant in the grand scheme of things. If you can only read one Gauntlet: Origins story, make it this one. Fred Van Lente and Phillipe Briones do a terrific job.

Spider-Girl had a strong outing in her last issue of Web. I am a fan of Wild Card and eager to see how he knows so much about Spider-Girl's powers. I'm not sure if we need the Punisher to join the fray, but we'll see where Tom Defalco takes it. Geez Frank, after all the gang wars that have taken place in Spider-Girl you only decide to come out of retirement now??? Better late than never...

The last story was a forgettable, by the numbers Spidey tale. Nothing happened that we haven't seen before. I will say that Jim Mahfood was a smart choice to draw a Paper Doll story. His style is a perfect fit for the character and was the highlight of the story.

I can only recommend Web #7 to a fan of both Spider-Man and Spider-Girl. As good as the first 11 page story was, it is difficult to justify putting down $3.99 for just that. Perhaps this is why Marvel is changing the format of the book. They should have just cancelled it. With the Gauntlet coming to a close, Web has served its purpose. Keeping it going in a world with thrice-monthly Amazing is just greedy. 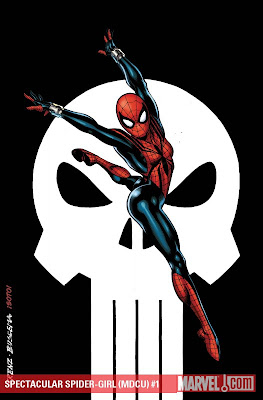 Be sure to pick up the Spectacular Spider-Girl #1 to see why Peter Parker's daughter refuses to go out of print! On sale May 5!